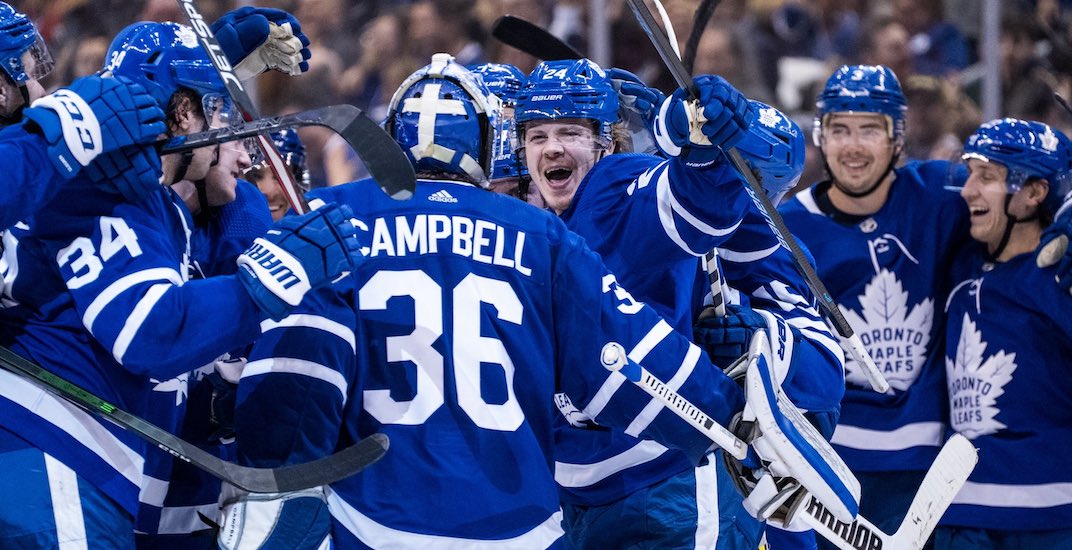 Giving the Maple Leafs a chance to win every night, the newcomer has stopped 89 of 97 shots to pick up two wins and an overtime loss so far. It’s early yet, but Campbell’s story rings familiar to many Leafs fans: put the trust of the season in a netminder you don’t know a ton about.

As Campbell’s already picked up five points in three starts compared to the nine Michael Hutchison has managed in his 11, it’s a night-and-day difference to a roster still fighting their way to a playoff spot in a tough Atlantic Division.

Here’s a look at some of the other recent Toronto backups tasked with saving the season:

These days, James Reimer is an established NHL vet with experience in four different organizations. Most will probably remember Reimer’s time in Toronto for an exceptional 2013 lockout shortened season that actually did come through with a playoff berth, comeback from down 3-1 in their first round series with Boston, and subsequent collapse of a 4-1 third period lead in Game 7.

But 2010-11 was the 22-year-old Reimer’s rookie year. A 2006 fourth-round pick who’d been hanging around with the AHL’s Toronto Marlies, there wasn’t much hype surrounding Reimer.

Reimer came in and made his first NHL start fittingly on January 1, and then made 34 more over the rest of the season, beating out Jonas Gustavsson and Jean-Sebastian Giguere for the No. 1 role.

Reimer was better than anyone could’ve asked for and received votes for both the Calder and Hart Trophies.

Despite his brilliance, the Leafs still finished eight points out of a playoff spot.

Ironically, the Leafs’ backup job probably could’ve still been Curtis McElhinney’s had the Leafs wanted it to be. McElhinney left the Leafs at the start of the 2018-19 season after they chose to waive him in favour of Garret Sparks, a move that had long-term implications in mind, but ultimately did not pan out. Sparks is in the AHL, while McElhinney is the backup goalie for a divisional rival in Tampa Bay.

Initially, McElhinney was claimed off waivers by the Leafs midseason out of Columbus, who wanted to get more time for youngster Joonas Korpisalo.

Before age 30, McElhinney was a career .899 goalie and spent regular time in the AHL. Since age 30, he has put up a .913 and has only played in the NHL. It’s a strange career arc, but one that’s easy to cheer for.

In game 81 of the season, Frederik Andersen went down with another injury. The Leafs needed the two points to make the playoffs, putting the trust in McElhinney to get the job done. His shining moment came with the Leafs clinging onto a 4-3 lead and Sidney Crosby facing an open net.

More than 100,000 views on YouTube, and the Leafs haven’t missed the playoffs since.

Ben Scrivens played more than your typical backup goalie, although it was very clear he was still the backup. Sure, it was only 20 appearances, but that’s over 40% of the team’s games in the 48-game season where he made 17 starts behind James Reimer.

Scrivens managed two shutouts on the season, a tall task behind a porous Leafs defence that finished 27th in shots allowed and 30th in 5v5 Corsi-For %.

Scrivens was shipped off to LA that summer in a trade centred around fellow goalie Jonathan Bernier, who came in with a little more experience and created more of a true tandem with Reimer. But Bernier and Reimer were never able to experience the postseason together, so maybe the Leafs complicated a good thing with Scrivens, who put up a .922 save percentage the following season with LA and Edmonton.

Like McElhinney, J-S Aubin wasn’t young when the Leafs got him. He’d already spent six seasons with Pittsburgh, where he spent the 1999-2000 season as a starter but had returned to backup duties since.

At any rate, the Leafs were 11th in the conference when Aubin was called into action on March 26th. Toronto was seven points out of eighth place, at even 70 points in 70 games. By all regular patterns, the Leafs should’ve been just about ready to throw in the towel.

But Aubin could not have been more impressive in his efforts to save the Leafs. He rattled off three straight wins to start his Toronto career, before losing in the shootout in his fourth appearance. After another win and a shootout loss, Aubin closed out the season with five more consecutive victories. The Leafs picked up 20 of a possible 22 points from his starts, finishing the year just two points shy of making the playoffs.

Toronto brought Aubin back the following year, but the magic was gone. He’d win just three of his 20 appearances, with a .876 save percentage making him look like a completely different goalie.