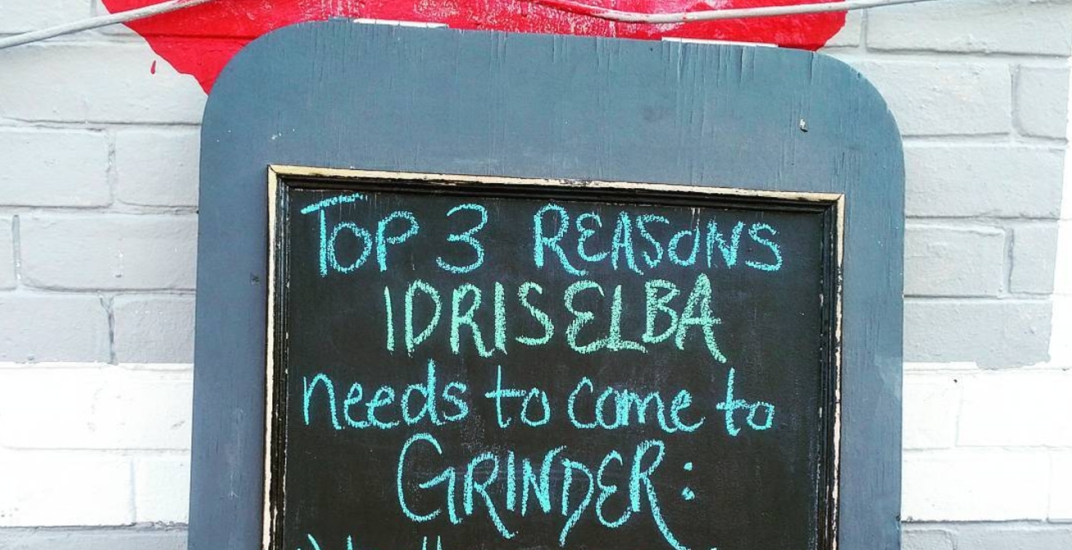 Celebrities will flood Toronto when TIFF kicks off on September 7 and while there’s plenty of famous names to get excited about, one Toronto coffee shop has their hearts set on meeting someone specific.

Presumably, because they’ll be at work rather than staking out the red carpet (and also because Toronto has more to show off than just King West–like Gerrard Square, apparently), the cafe has launched a two-week long campaign dubbed #idrisneedsgrinder.

Now on day three, Grinder has already listed off a number of good reasons why the star of Molly’s Game should swing by, they’ve tried to tug on heart strings with a little sob story, and even appealed to Ellen to convince her Finding Dory co-star to drop in.

Hopefully, it works and Elba finds his way over to Grinder during the festival.

So today begins Grinder’s 2 week campaign to get #idriselba to come to Grinder while he is in town for #tiff. We plan on “persuading” him ( this may be confused with stalking but so different) to come have coffee with us. @idriselba be prepared for lots of posts trying to convince you to come by for a coffee. To everyone else # your photos #idrisneedsgrinder for a chance to win a Grinder gift pack.

Day 2 of the #idrisneedsgrinder campaign. Today was our lovely Emily’s last day. We will miss her and wish her the best of luck out east. But @idriselba we are sad very very sad. You know what would cheer us up? Coffee and a chat with you. So come by at #tiff, it would really help ease the pain of losing our great employee #grindercoffeegerrard #toronto #idriselba #coffeeislife

Day 3 of our #idrisneedsgrinder campaign : So listen @ellen_degeneres we know you are really busy with the start of #ellen15 but we need a small favour from you. Could you send @idriselba a quick email telling your #findingdory costar to drop by Grinder while he is in town? Here we will even write it so you can just copy and paste: Dear Idris, I hope you and the family are doing well. I hear you will be in Toronto for #tiff Great city. While in town you really need to stop by Grinder coffee and visit my friend Joelle. The coffee is AMAZING and she is a great gal (gorgeous as well) Plus the mall across the road has some really cheap deals. When you go could you pick me up a half pound of their medium roast? Thanks, Ellen. Thanks again for your help we here at Grinder love you and all that you do. You also my dear have an open ended invite to visit any time. Plus a 10% off coupon with your name on it. #Toronto #ellendegeneres #coffeeislife #idriselba