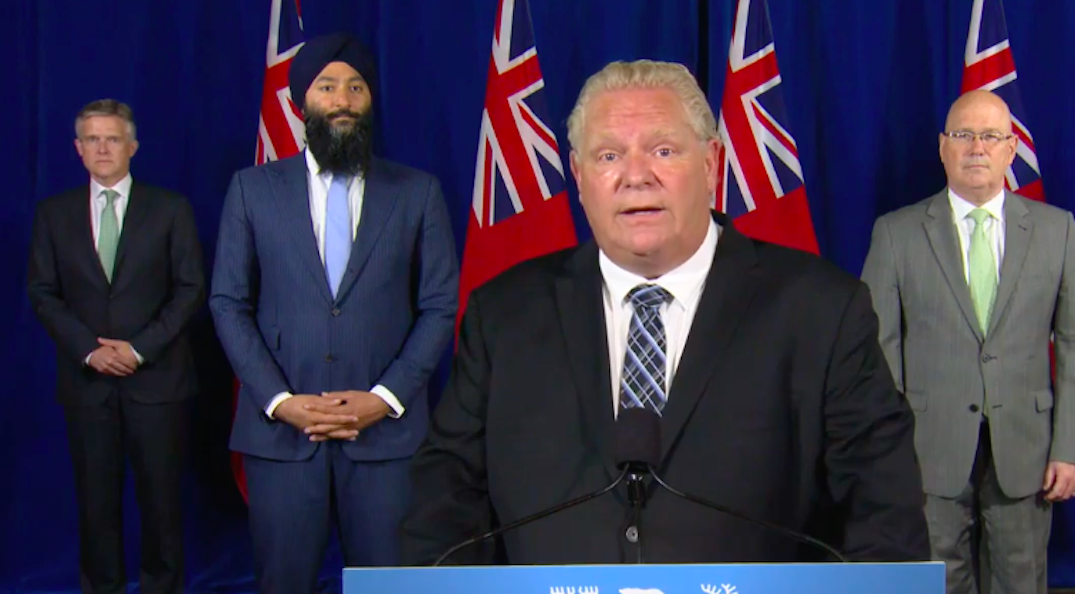 Ontario Premier Doug Ford said he is fighting for municipalities to get a fair economic recovery deal in response to the COVID-19 pandemic.

On Wednesday, Ford revealed he is having discussions with the federal government to cut municipalities a fair deal in order for cities to have the flexibility to spend the recovery money how they wish.

“I’m fighting for you. I will not short-change any of the mayors, and Toronto is only 18 % of the population; I have other municipalities to look after,” Ford said, adding that he’s calling for the province to be given the federal money in accordance with the population size.

The premier noted that Ontario is 38% of the population and should therefore receive that percentage cut of the funding from the federal government.

“We’re in negotiations with the federal government and will put money forward. I’m leading the charge for municipalities when I’m on the calls with the premiers. I’m pushing for a fair deal. I’m not happy with where we’re going at this point,” he said.

Ford said that he is not asking for the government to give more than $14 billion for the entire province, even though he doesn’t think it’s enough funding.

The premier emphasized that he talks with the mayors everyday and when the municipalities are given the money, they should have the flexibility to use it however they want, as they know their regions the best.

To give municipalities new tools and supports, the province also has new legislation going forward today called the COVID-19 Economic Recovery Act, which lays the foundation to restart jobs and development, strengthen communities, and create opportunity for people in the province.

Specifically, it would allow municipalities and their local boards to continue to choose to hold meetings electronically at any time and put in place a new community benefits charge to help municipalities pay for the infrastructure and services needed for growing communities.

On June 5, Canadian Prime Minister Justin Trudeau said that $14 billion will be dedicated to the provinces to help them reopen the economy safely.

Ford has said before that this payment “won’t cut it” as Ontario faces a $23 billion revenue loss.

Mayor John Tory has also said that if economic aid does not come from the provincial or federal governments, then drastic service cuts in the city will have to be made.