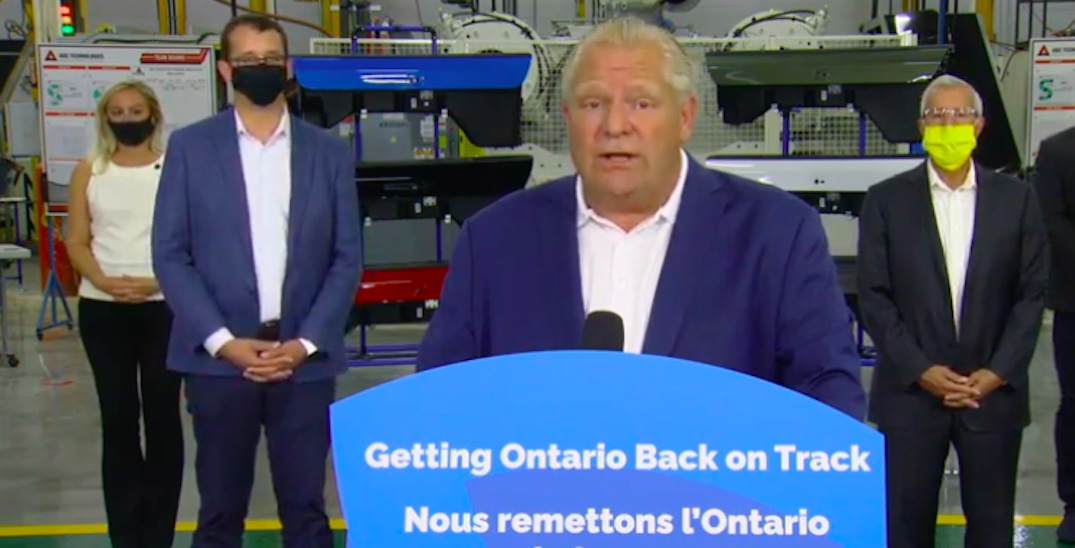 Ontario Premier Doug Ford said he is “begging” for teacher unions to cooperate with his government as they decide to take legal action on safety concerns for the back-to-school plan.

On Monday, the premier said, “I am begging for the teacher unions to work with us.”

He added that he supports the frontline teachers and are “confident they will step up to the plate and teach our kids.”

“I just can’t understand… we’ve worked with every labour organization of all different political stripes and 99.9% is getting along except for one group. And it’s the teacher unions.  Why? We’ve put $1.6 billion into education, more than any province or ministry.”

Ford said that for once he is asking for their collaboration and said every teacher he encounters has apologized for the way their union is behaving.

“We have done everything they wanted. We are sparing nothing. Every idea possible we’re putting into the classroom,” he said. “Compared to other provinces it’s night and day.”

The premier noted that during the peak of the COVID-19 pandemic personal support workers went into long-term care homes, of which many had outbreaks, and did so without a word of complaint.

“They’re heroes or our frontline healthcare workers and our grocery store workers who checked out hundreds of people and now we’ve created the safest environment we possibly can… look I don’t want to fight with you and to the teachers listening, I love you, I differentiate between the two of you.”

Ford later said that he will not hesitate to close schools if cases rise.

Earlier on Monday, the four major teacher unions: The Association des enseignantes et des enseignants franco-ontariens (AEFO), the Elementary Teachers’ Federation of Ontario (ETFO), the Ontario English Catholic Teachers’ Association (OECTA), and the Ontario Secondary School Teachers’ Federation (OSSTF/FEESO) – which together represent more than 190,000 teachers and education workers – said they will each be filing an appeal with the Ontario Labour Relations Board (OLRB) arguing that the Ministry of Education’s Guide to Re-opening Ontario’s Schools does not take every reasonable precaution to protect workers, as required by Section 25(2)(h) of the Occupational Health and Safety Act.

The unions said their representatives met with Ontario’s Minister of Labour and Chief Prevention Officer on August 24, and raised a number of concerns regarding the Ministry of Education’s “failure to put in place all reasonable precautions for a safe return to school.”

According to the teacher unions, they issued a request to the Minister of Labour that orders be made requiring the Ministry of Education to set standards around physical distancing, cohorting, ventilation, and transportation.

It was also requested that the Ministry of Labour review these orders monthly, in case scientific developments dictate more stringent standards, and that school boards be given additional time if necessary to implement proper health and safety measures.

“As of August 28, the date upon which it said it would respond, the Ministry of Labour had failed to comply with these requests,” the release said.

Most schools have varied start dates and staggered times across the province, with most generally beginning class in two weeks.