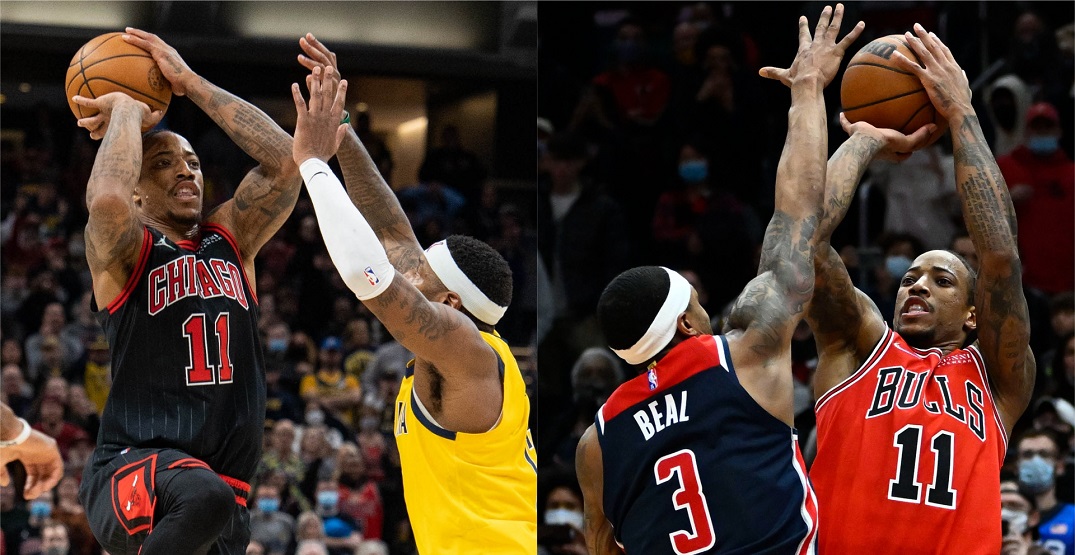 Chicago Bulls guard DeMar DeRozan rang in the New Year the same way he ended it: with a buzzer-beater.

On New Year’s Eve, DeRozan pulled up for a one-legged three-point shot in the waning seconds of Chicago’s matchup against the Indiana Pacers.

It’s a shot selection that looked absurd at first, but hey, it worked.

The next day in Washington, DeRozan decided to, well, just do it again.

Down two against the Wizards, he took an inbounds pass in the corner and nailed a shot in the face of Washington’s Bradley Beal.

One buzzer-beater was remarkable, but the second shot put DeRozan’s name in the history books as the first NBA player ever to have back-to-back buzzer-beaters on consecutive days.

Larry Bird did it in consecutive games on January 27 and 29, 1985. Here's a list of every game-winning buzzer-beater: https://t.co/eFnR0CMNvIhttps://t.co/qsrzvDzwxv

It was the third buzzer-beater of DeRozan’s career, after hitting this shot with the Toronto Raptors back in 2013 in a game against the Orlando Magic.

Three years after a trade from the Raptors, DeRozan has found his role in perhaps the best season of his career to date in his first year in Chicago.

He’s putting up 26.8 points per game along with 4.6 assists and 5.1 rebounds, with his Bulls team currently sitting in first place in the Eastern Conference with a 24-10 record.

TSN reporter Josh Lewenberg shared some stats about DeRozan’s fourth quarter performances throughout his career, proving his worth as one of the more clutch NBA players in recent memory.

Let's narrow it down further. In the final minute of games within 3 points or fewer, dating back to 2014-15, DeRozan has:

– Hit 70 shots, tied with Westbrook for most in NBA.

DeRozan and the Bulls are next set to face off against the Raptors on March 21, though the teams have a pair of games against each other to be rescheduled after COVID-19 cases among the rosters caused postponements.