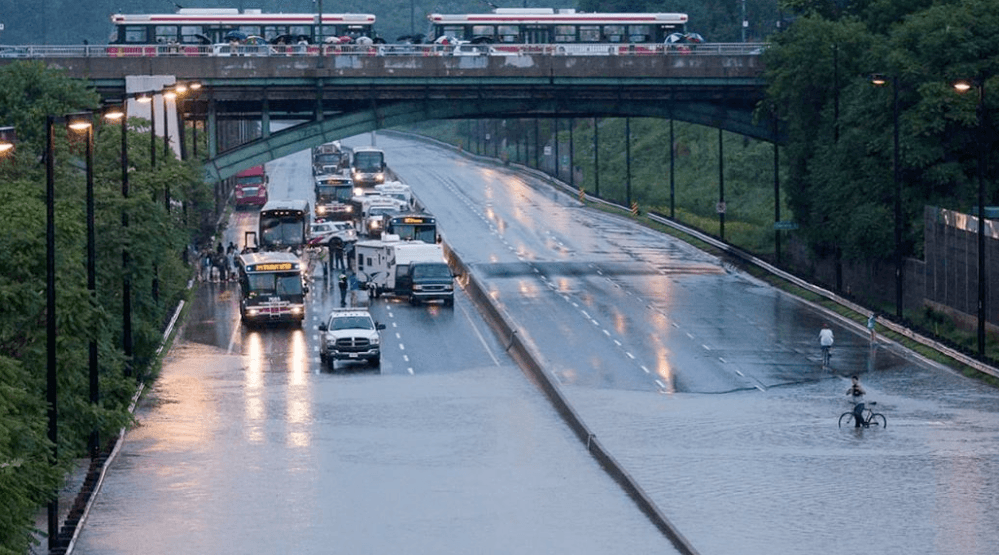 More rain is prompting the City of Toronto to possibly close the DVP as of 3 pm today.

With Environment Canada calling for between 40 and 70 mms of rain for the Toronto area over the next 48 hours, the rainfall may have significant effects on the City’s rivers system and water levels of Lake Ontario.

The City released a statement saying that they are working with agencies including Toronto and Region Conservation Authority (TRCA) and continue to monitor the situation and work with residents to prevent or minimize flooding and related problems.

Depending on conditions, the DVP may be closed as of 3 pm on Friday due to anticipated flooding and to protect public safety – updates on this potential closure will be issued as they become available.

The City is reminding residents to stay clear of rivers and streams, adding that all parts of Toronto can be affected by flooding and there may be little or no advance warning that localized flooding is imminent.

As part of the City’s continued efforts to mitigate the impact of wet weather on Toronto Island Park, the following service updates are effective immediately and until further notice:

• Ferry Service and access to Toronto Island Park will be restricted to required individuals only such as residents, staff, emergency personnel.
• Regular ferry service to Centre Island and Hanlan’s Point Docks is cancelled.
• If required, vehicles will be transported to Hanlan’s Island Dock on an as-needed basis.

Five City-managed beaches have already experienced flooding this week and public access to and use of these areas is restricted. Toronto’s Parks, Forestry and Recreation division is working closely with TRCA to complete remediation in these areas.