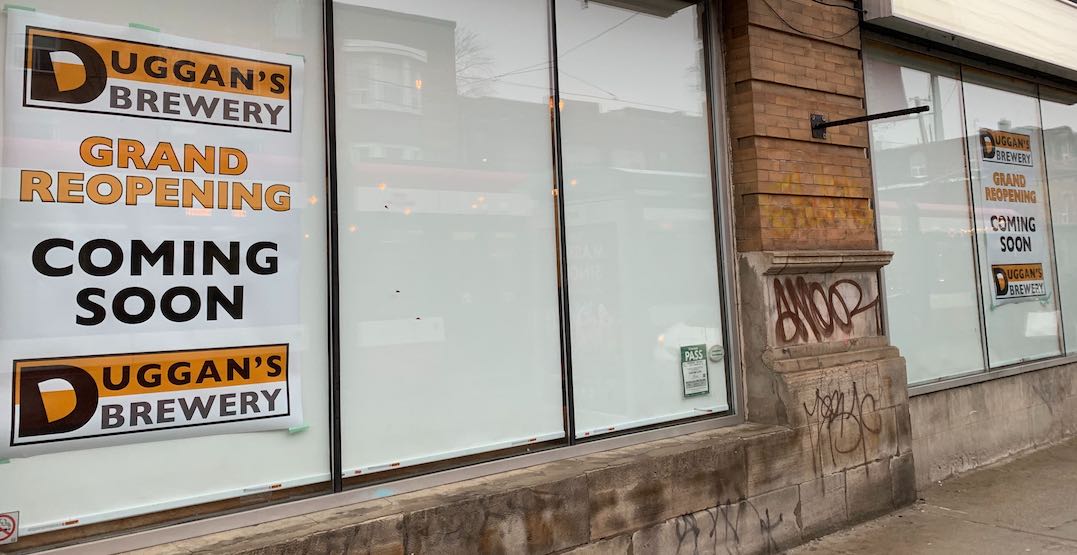 It’s only been a few weeks since Vegandale Brewery closed up shop and moved across the street, replacing Mythology with a new spot called Bar Vegandale.

And now, the mystery of what would live in the brewery’s old home has been answered.

It’s going to be another brewery and bottle shop — one that’s been in hiding for some time.

Duggan’s Brewery has been operating on the lower level of 1346 Queen Street West, accessible through the back entrance along Brock Avenue, since its upstairs dwellings were replaced by the plant-based restaurant a little over a year ago.

Now, at long last, the spot is reopening upstairs. The windows of Vegandale Brewery’s old home are plastered with signs that say Duggan’s will be celebrating its grand reopening soon, and the brewery has posted a notice about new hirings on its website.

The upstairs space will serve as a restaurant, bar, and beer store, and is currently hiring for chefs and cooks.

A post shared by Duggan’s Brewery Parkdale (@duggansbreweryparkdale) on May 11, 2017 at 3:24pm PDT

As warmer days approach, it looks like you’ll soon be able to count on basking in the sunshine through those giant windows while sipping on small-batch, seasonal brews.

Details have yet to be released on the spot’s grand opening celebration, but watch this space.