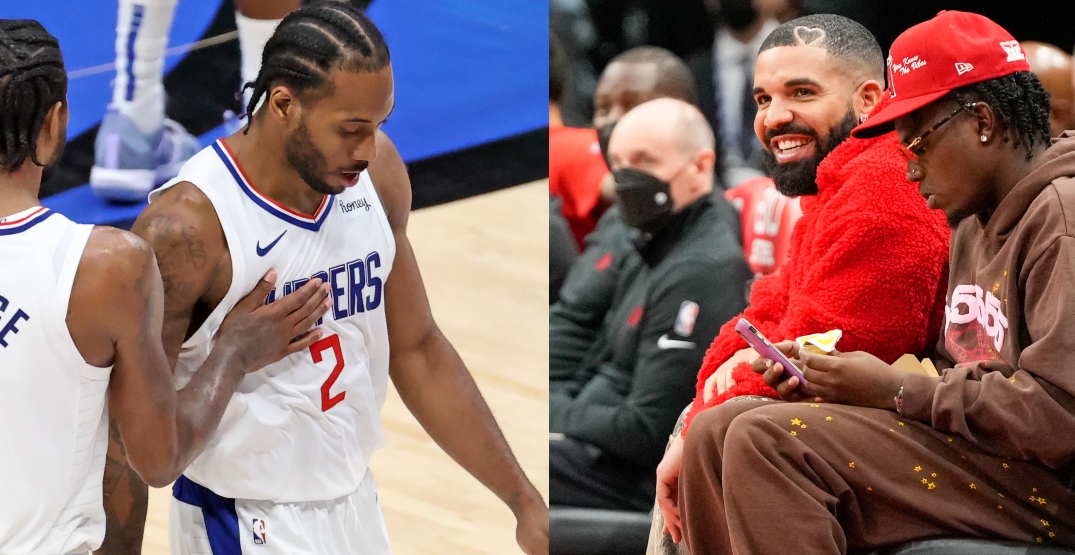 Drake was back sitting courtside at Scotiabank Arena on Monday.

Taking in the Toronto Raptors’ final home preseason game, Drake joined Matt Devlin and Jack Armstrong on the TSN broadcast for a moment — just like old times. The trio are already planning their outfits for the regular season home opener, taking place next week on Wednesday, October 20.

"Easy on the navy." 😂@Drake hooking Matt & Jack up with some fashion advice for Opening Night. 🔥 pic.twitter.com/Ru1yQ3Ju3h

The conversation also turned to Kawhi Leonard, with Drake revealing that the former Raptors superstar not only still thinks about Toronto, but he also genuinely misses the fans and the city.

“One thing about Kawhi that I can tell the people, whenever I see him he expresses the utmost gratitude and just always says how much he misses the fans and the city,” said Drake. “That’s my guy, honestly. He’s really grateful for his time here. We definitely miss him, for sure.”

Kawhi told Drake how grateful he was for Toronto pic.twitter.com/JOciYTYExb

The Raptors remained an elite team in 2019-20, after losing Kawhi to the Los Angeles Clippers. Things didn’t go so well last season though, with the Raptors missing the playoffs entirely.

With Kawhi on their side, the LA Clippers have been one of the NBA’s best teams, but lost in the second round of the playoffs in 2020, and were eliminated in the Western Conference Finals last season.