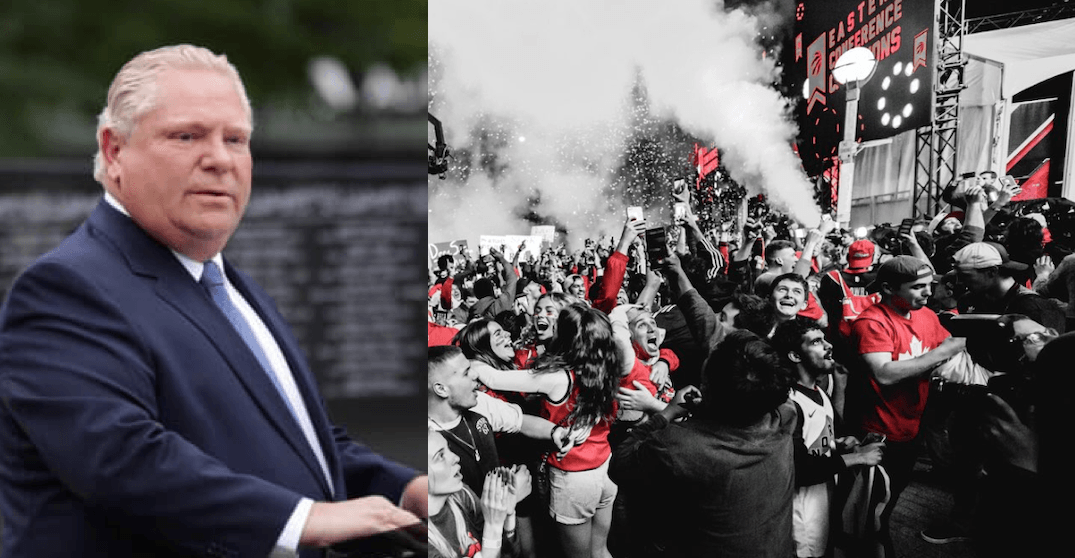 In case you missed it, but clearly no one has, the Toronto Raptors are going into the NBA Finals for the first time in franchise history.

On Saturday night, the Raptors came back from being down as many as 15 points in the third quarter to beat the Milwaukee Bucks 100-94 in Game 6 and win the series.

The big game had everyone, from other athletes to politicians, tweeting their excitement for Toronto, and love for the Canadian basketball team.

History made! @Raptors, it’s time to bring that championship to Canada! #WeTheNorth

The @Raptors made history tonight! So proud of our team, the fans and this great city. Bring on the @Warriors in the #NBAFinals #WeTheNorth #NBAPlayoffs https://t.co/Tc5yu4OpHo

Even Kiefer Sutherland was excited about the win.

From a boy who grew up in Toronto, congratulations @Raptors! Good luck in the finals. https://t.co/R1hgeiHDad

So naturally, Ontario Premier Doug Ford got in on all the Twitter action… But it didn’t seem to go as planned.

“Started from the bottom, now we’re here! Congrats to the Toronto Raptors on their win tonight to advance to the NBA Finals for the first time in franchise history,” said Ford. “A great day for basketball fans across Canada.”

Congrats to the Toronto @Raptors on their win tonight to advance to the NBA Finals for the first time in franchise history!

A great day for basketball fans across Canada! #WeTheNorth https://t.co/bjIIf9ZPSF

Whether or not the message was sincere, the over 800 replies to his Saturday night tweet showed Torontonians did not want his support.

“You mean Congrats to the city where you’re continually cutting funding and services? Where some kids can’t play basketball anymore cuz of cuts to education & as a result cuts to sports & extra curriculars? That city?” tweeted Patty Sullivan.

Another tweet reply read, “BREAKING: Ford Nation announces cuts to how much we celebrate the Raptors win as the Eastern Conference Champ.”

Ford recently cut an estimated $177.65 million from Toronto’s 2019 alone. Though it appears, as of today, he’s about to reverse at least some of those.

According to the City of Toronto, the originally cancelled planned provincial gas tax funding would have amounted to $24 million, while the cuts to children’s services $84.8 million.

Additionally, Toronto paramedic services were facing $3.85 million in cuts, while the shortfall from Toronto Public Health would have been $65 million.

Besides chopping the city’s budget, Twitter was also quick to point out that Doug and his late brother Rob were two councillors who voted against a Raptors Practice Facility, which is now the OVO Athletic Centre.

For the next time Doug Ford tries to hop on the Raptors bandwagon… he (and brother Rob) were the only 2 people at city hall to vote against a NO COST TO THE CITY Raptors Practice facility (now the OVO Athletic Centre). https://t.co/vgfdZlCg2m

A new poll issued last week showed that Ford’s support continues to decline and based on the numbers, and his rating has now fallen even lower than Kathleen Wynne’s before the last election.

So while he may try to get on the bandwagon, it appears the city is shutting down the idea.

Check out what Toronto was feeling after Ford’s alleged Raps support.

You inherited everything you own and then leveraged that wealth to takeaway from everyone else less fortunate. That would be the opposite of the bottom.

nah get the fuck outta here

Oh PLEASE, stop ruining our day. You have no love for anything #Toronto, so just STOP! 😠 #GoAwayDougFraud

You don’t get to celebrate the same things as me and Toronto after you slash funding to everything this city needs to stay afloat so how about pic.twitter.com/0OwZSQ8mTA