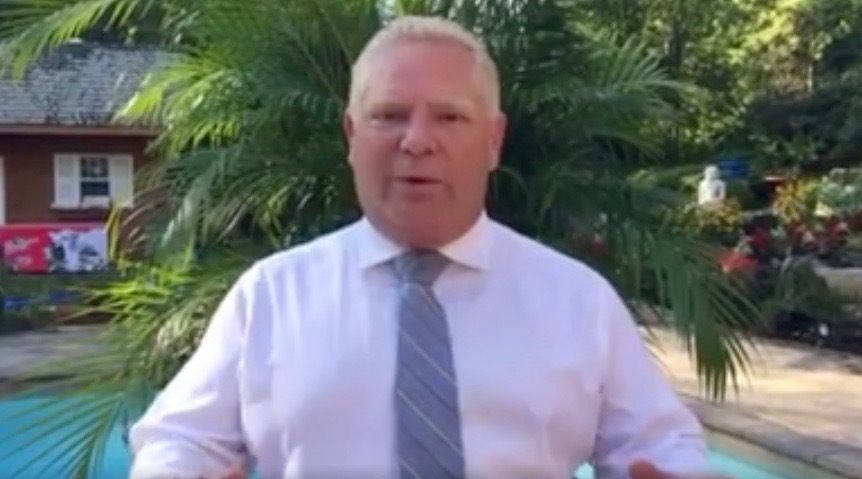 That isn’t intended to be a political statement.

This isn’t about whether you lean left or right when you pick up a ballot, it’s about whether or not you slant toward a**hole in everyday life.

Yesterday, Doug Ford kicked up a fuss to get the media out to his mother’s Etobicoke home.

And by fuss, we mean a release that was filled with mystery and excitement:

Doug Ford sent out a press release about a “special announcement” on Tuesday at the Ford family home #TOpoli pic.twitter.com/rGc9QWO6eY

Would it be that Ford was going to announce his re-entry into politics? Would he be coming after Mayor Tory, Premier Wynne, or even Prime Minister Justin Trudeau?

What else could Doug Ford possibly have to offer to the people if not himself? Who can stop the gravy train if not a Ford? How can this city, province, or country survive without Doug Ford?

Keep in mind these last three questions were not public inquiries, rather simply questions floating around Doug Ford’s head as he continues to create his own legend.

And he’s pretty good at doing just that. So much so that a ‘special announcement’ was enough to lure dozens of media to Etobicoke this morning to hear what Rob’s older brother had to say.

This man feels he deserves a press conference to announce that he is releasing a co-authored book with his late brother entitled: Ford Nation: Two Brothers, One Vision—The True Story of the People’s Mayor.

Of course, Ford also spent some time saying Trudeau was unfit for office, Wynne is essentially a thief, and that this will be “the most exciting book this country’s ever seen when it comes to politics.” As opposed to the “four or five other people who have written books. The ‘untrue stories’ as I call them. It’s going to be fact, factual.”

Good talk. Just which there was more hyperbole here.

Oh, and he also went on to threaten the media, not just media in general but also specifcally all the media covering the announcment, as well as every politican in Canada:

“And I can tell each and every one of you, every media outlet here, nothing, it’s as I say, it’s no holds barred with the media, you’re going to be named in here, there’s no politician safe in this country when this comes out.”

The book will be released on November 22 by Harper Collins and Ford will partake in a national media tour surrounding its release (can you say gearing up for federal politics?).

And then, presumably based on how the book and tour are received, Ford will make another announcement that may or may not actually offer something tangible about his political future.

Here’s to hoping no one shows up to find out.

Picture Doug Ford doing a reading inside an Indigo store. PICTURE IT

Doug Ford is a deeply unappealing man, good luck to him

The only thing shocking about Doug Ford throwing a big press conference just to announce a book is the fact that Ford can read or write.

Reporters who dragged all their gear to the Doug Ford announcement must be a little annoyed.

Just a reminder that you don’t have to buy Doug’s book, you could donate the money to any of Toronto’s worthy charities instead #Topoli