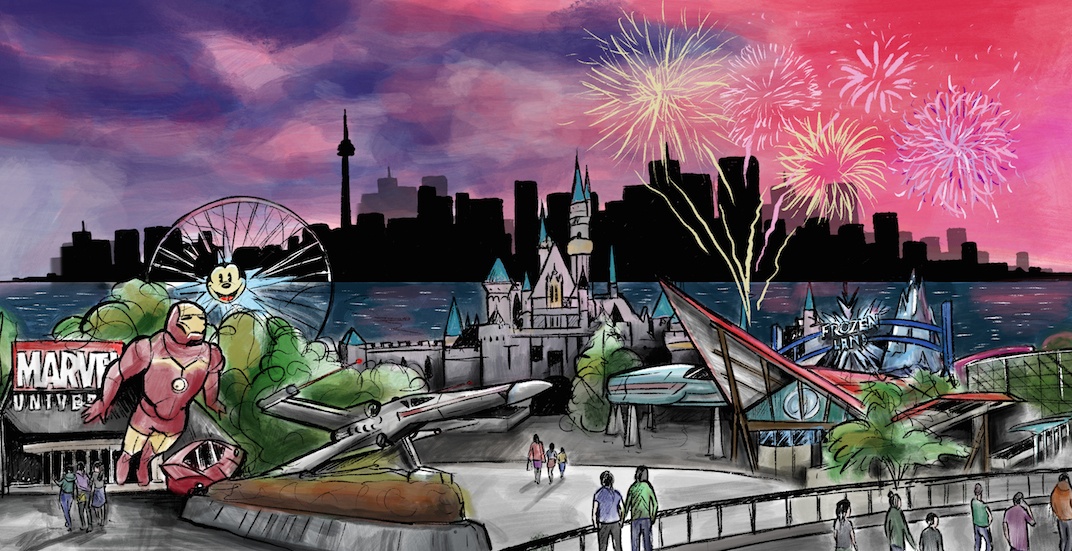 The Walt Disney Company is bringing its magic north of the border to call Toronto its newest theme park home.

A proposal to transform Toronto Islands into a global entertainment destination was announced this morning during a press conference held at Metro Toronto Convention Centre.

The $6.5-billion attraction, known as “Toronto Disney Resort,” centres on the construction of Canada’s very own Disneyland theme park – Toronto Disneyland – on the site of Billy Bishop Toronto City Airport.

Other public spaces on the islands beyond the airport site will be maintained as accessible park space and improved through a new parks lands management partnership with Disney.

There will also be hotels on the island, next to Disneyland, and improved transportation links between the island and downtown. 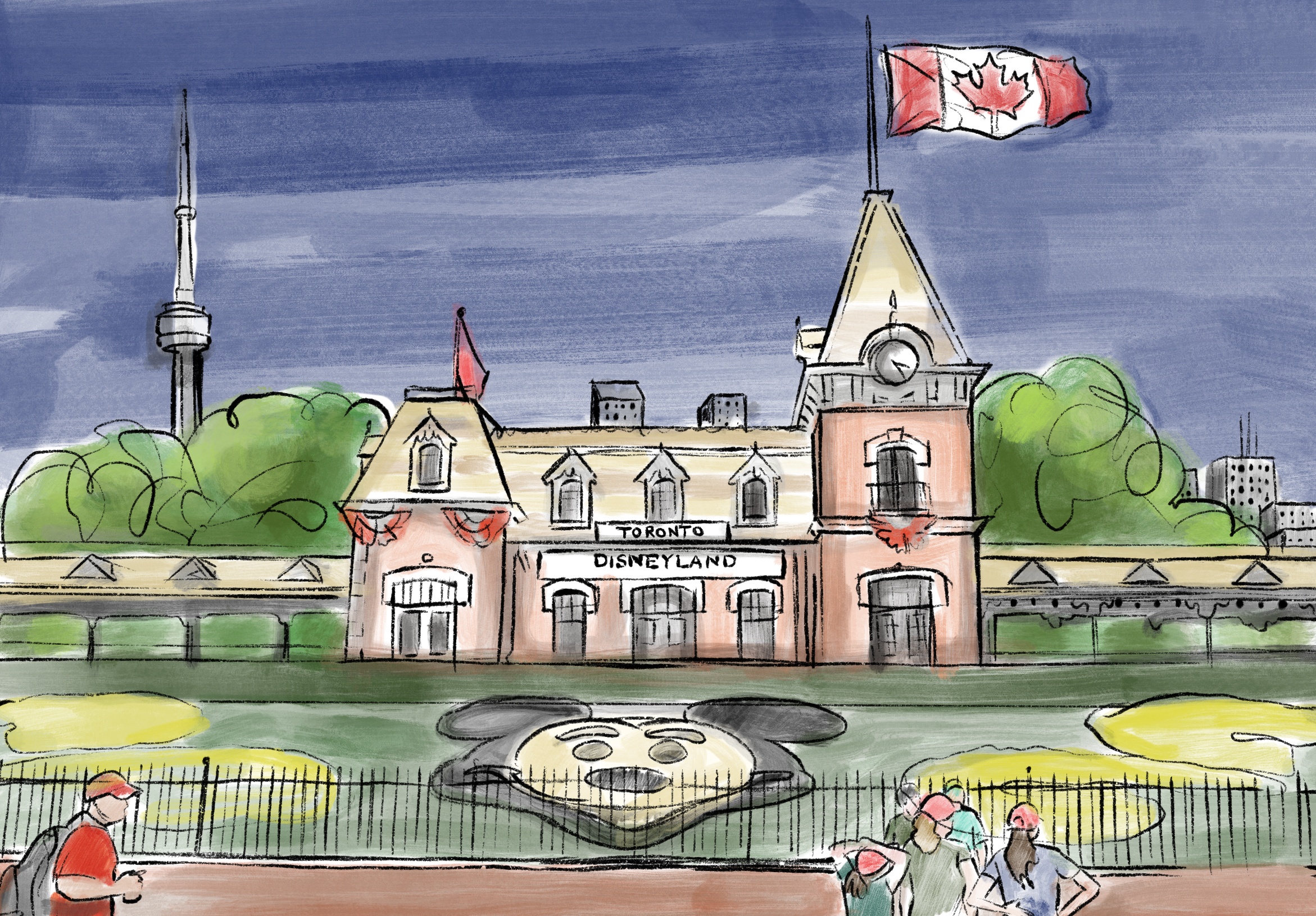 “Here in Toronto at this spectacular location, we are dreaming of something truly magical that not only showcases the best of Disney’s storytelling but also creates a one-of-a-kind destination that will delight and entertain people for generations to come,” said Bob Iger, chairman and CEO of the Walt Disney Corporation.

“Everything we have learned from our six decades of exceeding expectations, along with our relentless innovation and famous creativity, will create a new destination that signals a new era for Disney theme parks.”

Disney will have a minority stake of 48% while the remaining majority stake of 52% will be owned by the Hiawatha Development Corporation, a new public-private consortium that will lead the undertaking of the project. 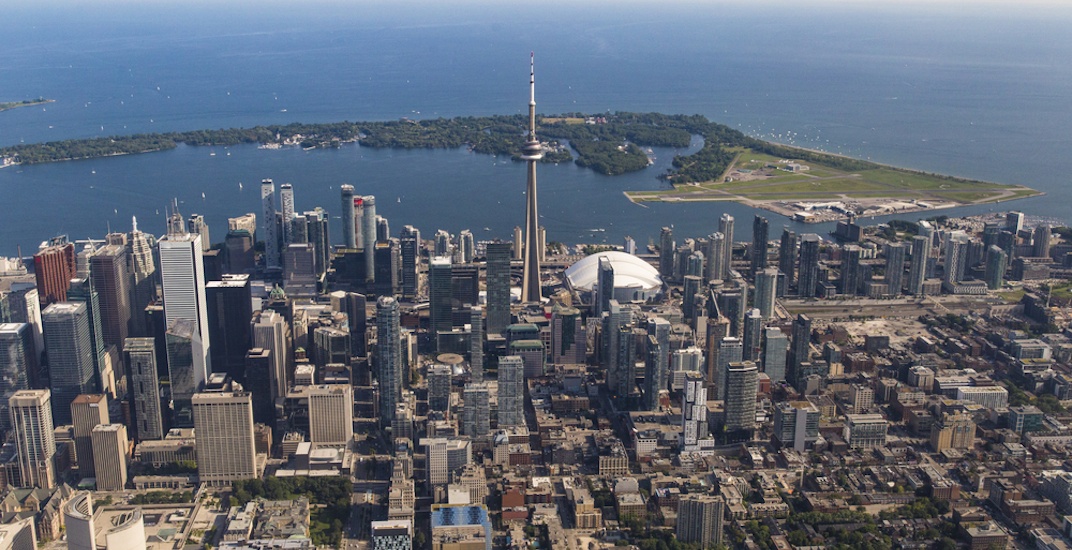 The Toronto Port Authority, the federal agency that currently owns and operates the airport, will be dissolved, and its portfolio over the airport’s lands and assets will become a purview of Canada Lands Company, which also owns and operates Downsview Park, the CN Tower, and the Old Port of Montreal.

“We are incredibly excited about today’s announcement,” said Michael Rensie, the president and CEO of Hiawatha. “Disney theme parks are known throughout the world for extraordinary rides, shows, and unique experiences that are enjoyed by the entire family. We are proud to be a part of the growing family of Disney parks and resorts worldwide.”

Hiawatha’s contribution is $250 million from the federal and municipal partners and $2.88 billion cash from Oxford Properties, Kilmer Van Norstrand, and Instar AGF. The remainder of its share in the investment comes from the provided land value.

Disney will provide $3.36 billion cash and have full creative control. 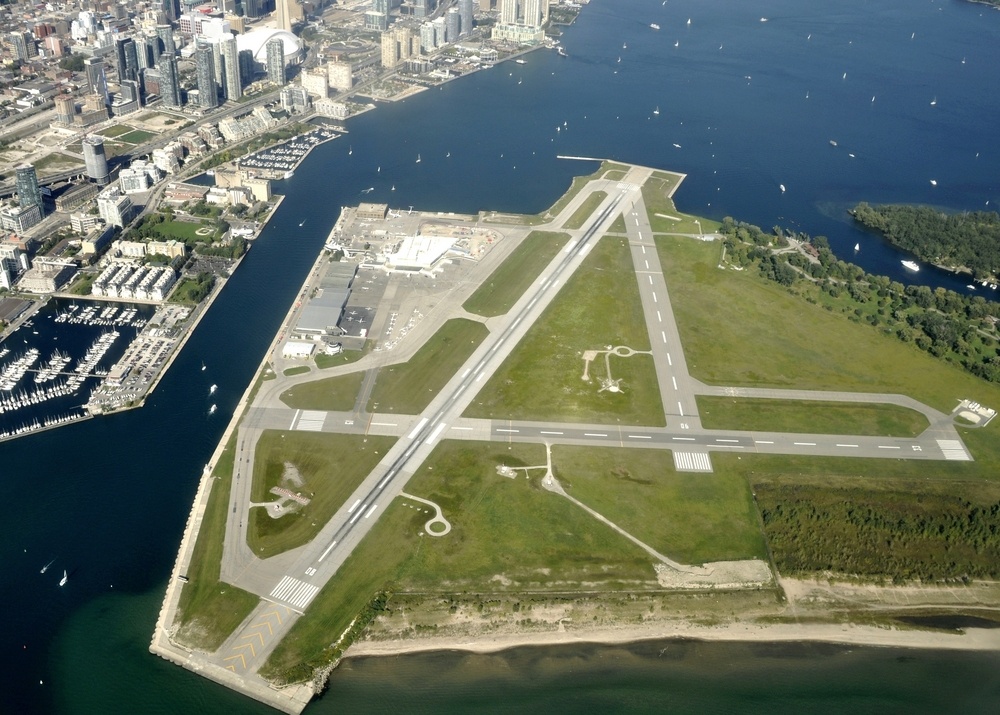 “This partnership is a celebration of creativity, collaboration, commitment, and innovation, and a testament to Toronto’s growing place in the world,” Toronto Mayor John Tory said. “Disney’s choice of Toronto for the location of its next international theme park is certainly a vote of confidence in our city and our future by the world’s most prestigious and renowned entertainment company.”

“Toronto Disney Resort will be an extraordinary destination that will provide Toronto with its largest year-round tourism engine and create self-funded improvements to Toronto Islands’ attractions and resilience to flooding,” continued Tory.

Upon opening, Toronto Disneyland will have a capacity for up to 45,000 guests – just over half of Magic Kingdom and Disneyland Anaheim. Theme park operations will employ about 8,000 people, and an additional 3,500 people will be employed in other areas such as hotel and transportation operations.

Following a four-year consultation and detailed design period, and subject to various final approvals, construction could begin in 2022 for an opening by summer 2028. 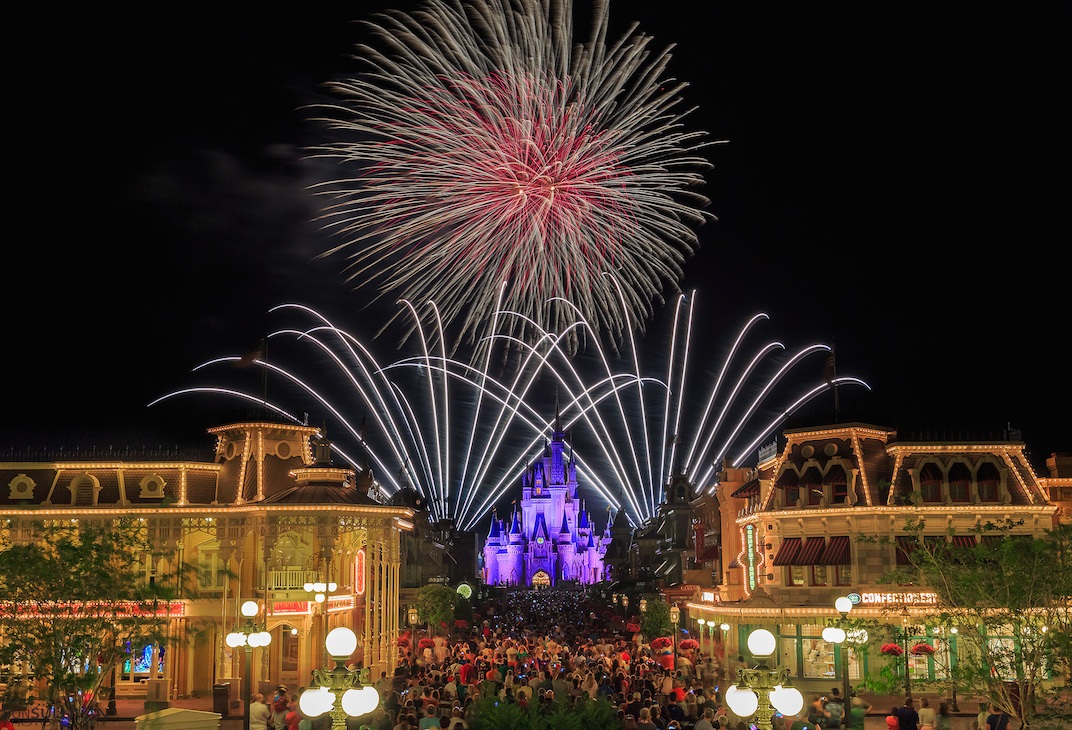 Toronto Disney Resort is expected to boost Toronto’s economy by $48.5 billion over the first 30 years, with 15,000 jobs created during the construction phase and generate a total of 40,000 direct and indirect jobs once open.

With airport operations at Billy Bishop ceasing to exist, there will be a greater focus on expanding Toronto Pearson International Airport as a mega regional hub.

Here are the preliminary plans for Toronto Disney Resort:

A media backgrounder on the scope of Toronto Disneyland, with preliminary conceptual renderings, show a new concept, all-season theme park that will be substantially different than the destinations in California and Florida.

The 350-acre theme park will occupy the 200-acre airport lands and require an additional 150 acres of infill to accommodate both the attractions, back-of-house facilities, hotels, public spaces, and other infrastructure.

The park will be designed with Toronto’s harsh winter climate in mind, while also taking advantage of it.

Like other Disney parks, there will be daily parades and a nightly fireworks show.

Some of the early concepts show an initial seven themed lands upon opening: 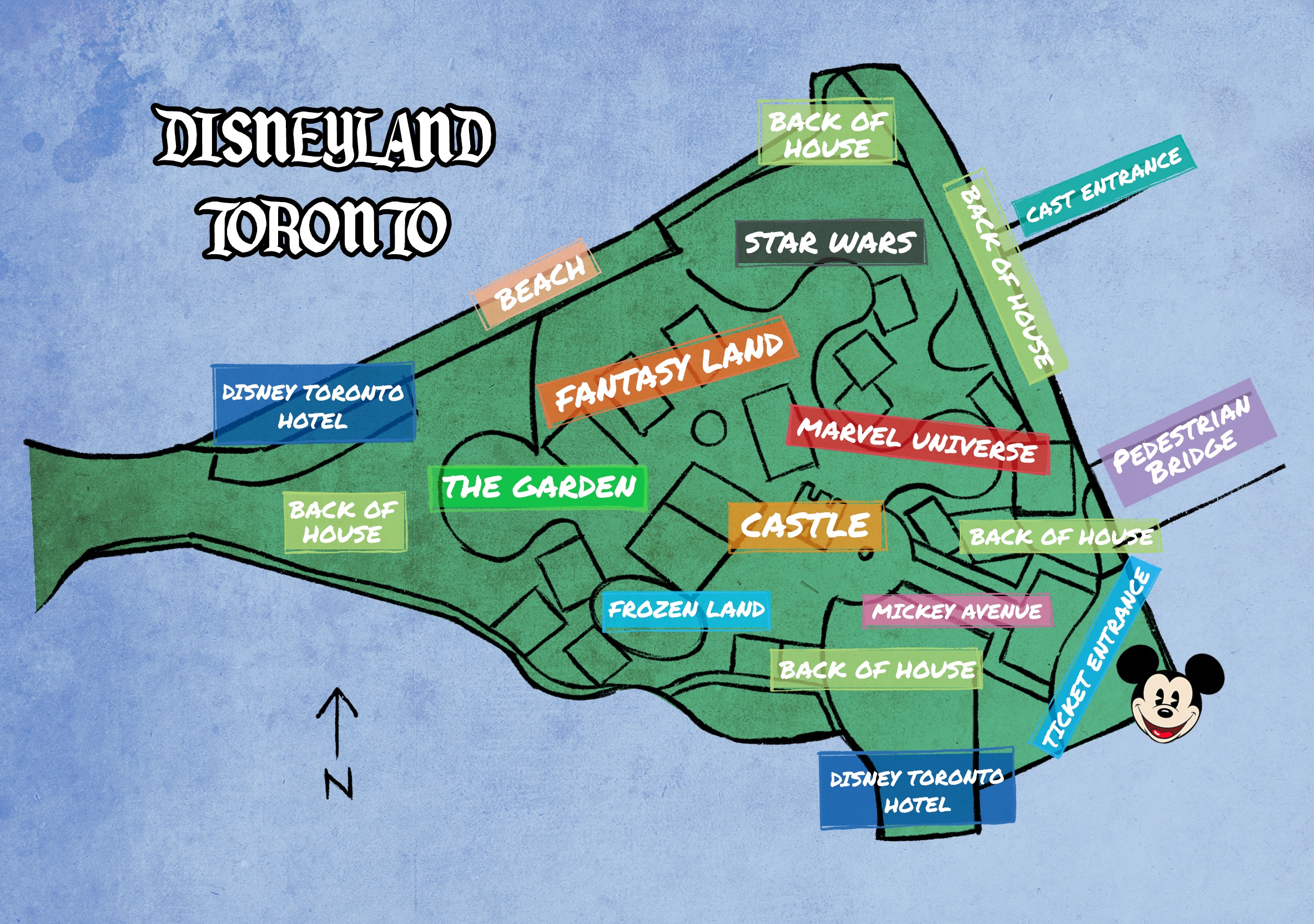 Similar to Main Street, USA, and borrowing the concept of Shanghai Disneyland’s Mickey Avenue, this welcoming avenue – inspired by the colourful personalities of Mickey Mouse and his friends – with shops and restaurants will provide the first main entry into the theme park.

A 16-storey castle with a unique design will be located at the heart of the park, within Fantasy Land. Expect familiar rides such as Peter Pan’s Flight over London, an indoor Seven Dwarfs Mine Train, Little Mermaid’s Ariel Undersea Adventure, and the Hundred Acre Wood with Winnie the Pooh.

One of the lands will be based on the world of Frozen, including the Arendelle castle, rides and live shows based on the hit film, and uniquely themed dining and shopping.

A ‘mountain range’ with three mountains reaching 13-storeys high will provide the setting for the ice planets in the Star Wars universe. Expect giant replicas of the attacking imperial forces’ AT-ATs outside, and a cavernous indoor environment inside the mountain for the rebel base, with the Millennium Falcon doubling as a restaurant and various indoor rides such as Star Tours and a ‘dark roller coaster’.

Explore the base of The Avengers and the hidden, super-modern nation of Wakanda from Black Panther, with unique indoor rides, dining, and shopping.

Similar to Epcot, a 10-acre land will be exhibition space to host special seasonal events and festivities throughout the year.

During the cold winter and early-spring months, it will feature one of the world’s largest ice and snow festivals. Imagine dozens of giant ice and snow sculptures of Star Wars characters, Mickey Mouse and his friends, and more, which all illuminate with colours at night.

As for the summer and early fall months, the gardens could be used for festivals celebrating flowers, food, and wine.

Approximately 60 acres, accomplished through lake infill, will be reserved for the future addition of two or three lands.

Under the agreement, Disney will improve, manage, and operate Toronto Islands’ existing green spaces and attractions – a takeover of the responsibilities currently under the City of Toronto’s Parks, Forestry and Recreation Division. 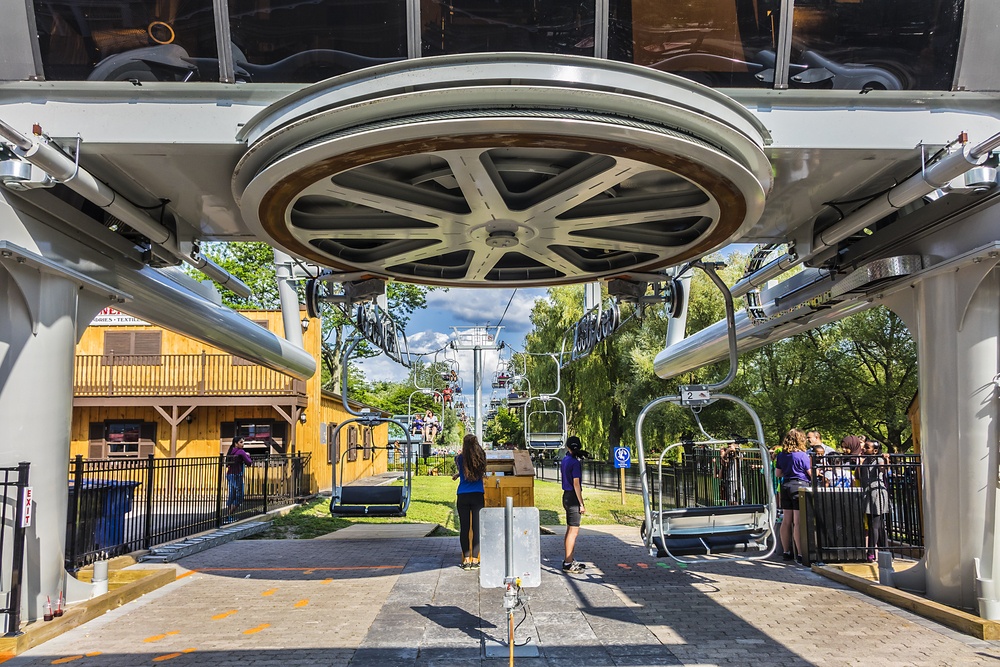 Disney is anticipated to invest $475 million towards improvements over a five-year timeline. This includes:

Overall, after further phases of expansion with additional attractions, Toronto Islands could resemble a resort attraction model similar to Sentosa, a popular island resort next to downtown Singapore, with Universal Studios Singapore as one of the island’s anchor attractions. 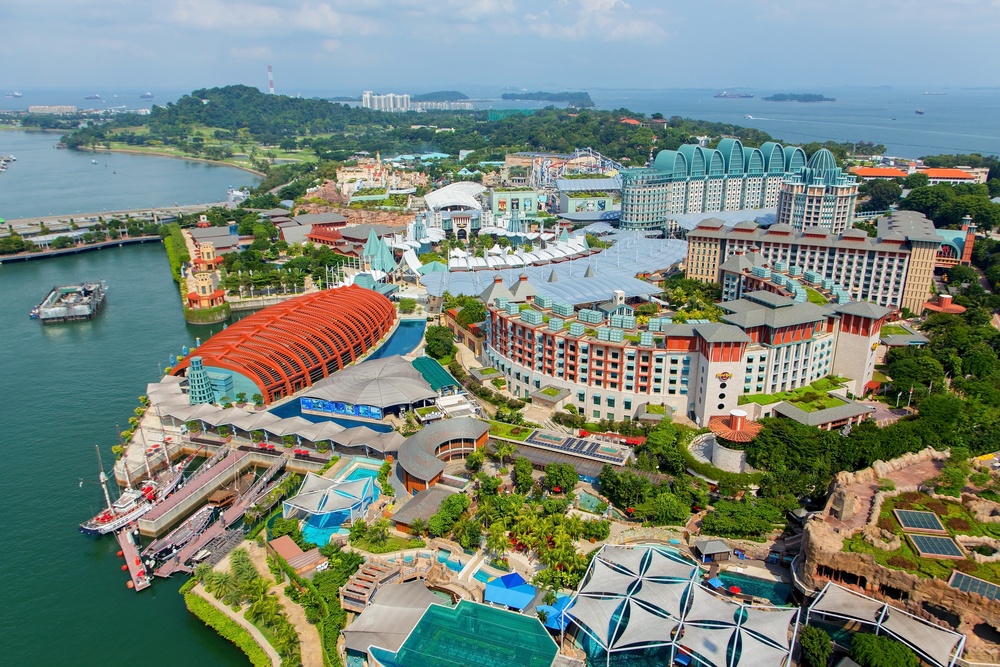 Aerial view of Sentosa, a popular island resort next to downtown Singapore. (Shutterstock)

Two hotels adjacent to the Disneyland park are proposed.

The upscale Toronto Disneyland Hotel on the eastern side of the airport property, next to the park’s exterior entrance and ticketing plaza, will have 350 rooms. The hotel will boast some of the best views of the downtown Toronto skyline.

On the western side of the theme park, immediately south of Hanlan’s Point Beach, will be Disney’s Port Toronto Hotel – a mid-scale, ship-themed hotel property with 700 rooms. The existing clothing optional beach area will be relocated to Ward’s Island Beach on the easternmost end of Toronto Islands.

Both hotels will have the Disney resort’s flagship restaurants.

To support the ingress and egress of large crowds and ‘cast members’ (the term Disney uses to describe its staff and employees) to Toronto Disneyland, the hotels, and other Toronto Disney Resort areas on Toronto Islands, there will be a multi-modal approach to improving transportation connections while maintaining a car-free environment on the islands.

Two bridges will be built over the Western Channel between the existing airport passenger pick-up and drop-off facility in downtown Toronto’s Bathurst neighbourhood and the islands, with one 50-metre wide bridge for pedestrians only and a second 15-metre wide bridge on the far western end for the movement of goods, supplies, and materials.

The pedestrian-only bridge will directly lead to the main entrance and ticketing plaza of Toronto Disneyland.

To support the crowds, this will also necessitate the closure of Eireann Quay Road south of Queens Quay West into a pedestrian-only road.

Disney Transport, the Disney Parks & Resorts division that operates the public transit system at Walt Disney World in Florida, will takeover the operation of the Toronto Island ferries from the City of Toronto’s Parks, Forestry, and Recreation division.

This includes the acquisition of additional large vessels, particularly for the main route to Toronto Disneyland’s entrance and ticketing plaza, and other improvements to existing ferry terminals elsewhere on the islands.

Additionally, Disney Transport will take over the construction and operations of the new Jack Layton Ferry Terminal. There will be some modifications to the chosen 2016 terminal redesign to adjust to the needs of Disney’s anticipated crowd volumes. 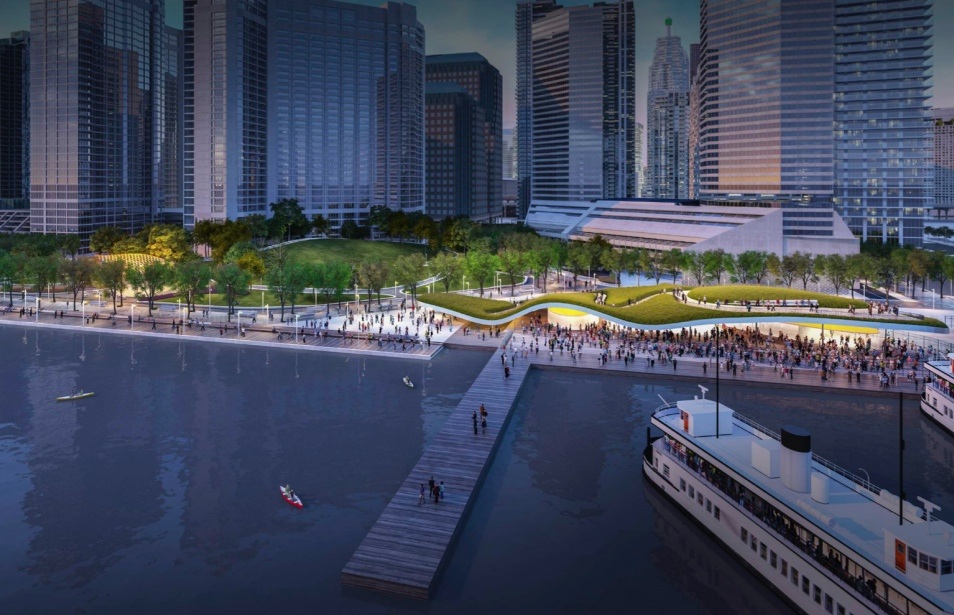 Artistic rendering of the new Jack Layton Ferry Terminal in downtown Toronto. The expansion design will be revised for Disney’s needs. (City of Toronto)

While there will be an emphasis on public transportation services, including the Disney Transport ferries, several new multi-storey parking facilities will be constructed for Toronto Disney Resort guests:

Billy Bishop Toronto City Airport’s existing airport pedestrian tunnel will be re-purposed into a tunnel for the entrance and exit passage for cast members to use. This will ensure cast members arrive to their workplace out of sight in secret in order to maintain the Disney magic for guests. 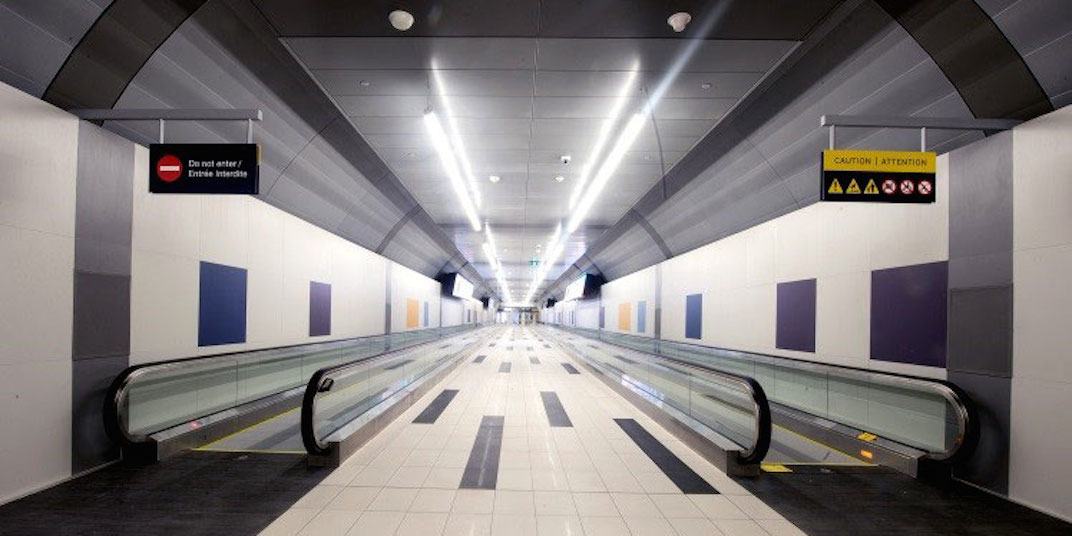 Future transportation connections include built-in provisions for a subway station near Toronto Disneyland’s main entrance and ticketing plaza, should a decision be made to extend the subway to Toronto Islands.

Other options potentially even include a people mover rail line between Union Station and the main entrance via Bathurst.

If the Disney resort plan proceeds, it will represent a “full circle” journey for Toronto Islands’ use as a theme park/amusement park destination for the region.

“There is no question Toronto Islands is returning to its roots as an amusement destination for our world-class city,” said Tory.

Hanlan’s Point, which is on the proposed footprint of Toronto Disneyland, was once the home of Hanlan’s Point Amusement Park. This amusement park operated from the 1880s to the 1920s with numerous rides and attractions such as a roller coaster, scenic railway, carousel, carnival games, a theatre, dance pavilion, and grandstand for larger live entertainment shows.

The Hanlan family also built a hotel on the western edge of the islands – right next to the amusement park at the approximate location of the existing nude beach, near the location of the proposed Disney’s Port Toronto Hotel.

Then in 1910, Hanlan’s Point Stadium was constructed next to the amusement park. The 18,000-seat stadium was the home of the Toronto Maple Leafs baseball club and is known as the home of Babe Ruth’s first professional home run.

An open house exhibition of the detailed preliminary plans, including additional renderings and models, for Toronto Disney Resort will be held at Metro Toronto Convention Centre between May 4 and 13 (10 am to 6 pm weekends; 2 pm to 8 pm weekdays). Visit www.torontodisneyland.com for more information.