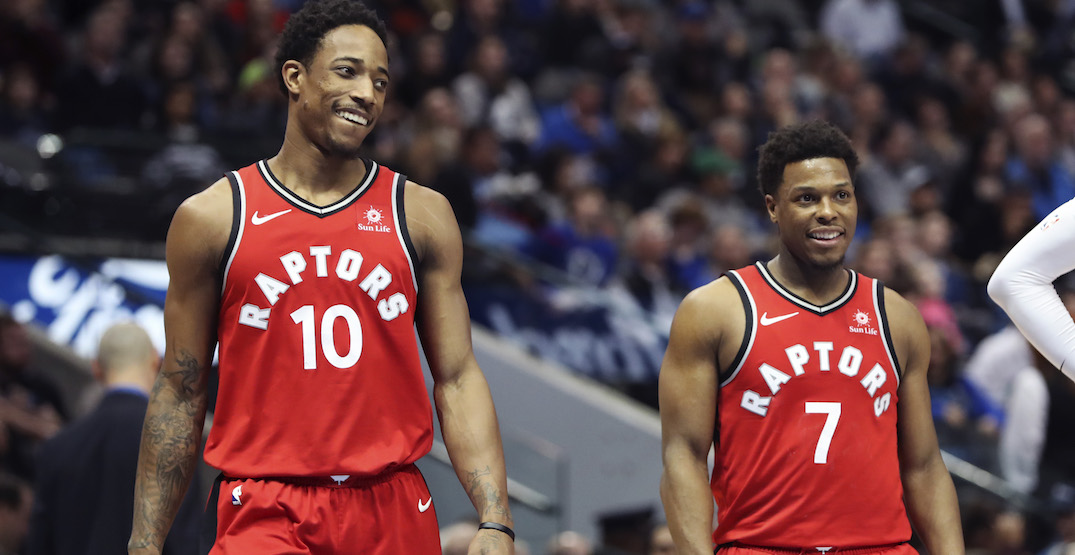 Former Toronto Raptor DeMar DeRozan has never been shy about his love for the city that he co-starred in for nearly a decade alongside Kyle Lowry.

DeRozan’s nine seasons with the Raptors came to a stunning halt in the summer of 2018, when he was shipped off to San Antonio as part of a trade package for Kawhi Leonard. The rest of the story is well-documented: Leonard stayed for just one year, but won the ultimate prize: an NBA championship.

DeRozan stuck around with the Spurs for the remainder of his contract, hitting free agency for the first time this past summer.

DeRozan opted for a three-year, $81.9 million deal with the Chicago Bulls. It’s paid off handsomely for both sides, as DeRozan has averaged 28.0 points, 5.4 rebounds and 5.1 assists in 61 games this season while tossing his name in MVP discussions.

On an appearance with former Raptors teammate Serge Ibaka on his How Hungry Are You? cooking show, DeRozan opened up about his free agency options.

Ibaka asked DeRozan if a Toronto reunion was ever in the cards this past summer.

“If the Raptors offered you a better contract or similar contracts, similar money to Chicago, would you consider going [back to Toronto?]”

DeRozan said only one person could convince him to come back to the Raptors — Lowry.

“If Kyle [Lowry] was there,” DeRozan replied. “That’s the only person I wanna keep it rolling with.”

Lowry eventually ended up with the Miami Heat as part of a sign-and-trade deal.

DeRozan conceded that the Raptors have gone in a different direction, shouting out Fred VanVleet and OG Anunoby’s emergence as two of the new leaders of the team.

“I love all those guys but I think I told one of those guys… that’s their team,” DeRozan said. “My history there is stamped and sealed. I wouldn’t feel like myself if I went back.”

It seems like the move was still more of a thought than anything, though, as DeRozan mused that had Lowry stayed, it would have been a tricky fit for the Raptors’ front office to work in new contracts for everyone, including himself.

DeRozan also said that he’s happy to support his ex-teammates, but is fine doing it from afar.

“They’ve earned everything they have there. They’ve earned to be starters, to be the face of that franchise. And I love rooting for them, from elsewhere.”

DeRozan touched on the possibility of joining the Los Angeles Clippers, where Leonard currently is and Ibaka was before being shipped off to the Milwaukee Bucks on trade deadline day.

“It really was a real possibility,” DeRozan said. “But you know, we got the deal done with Chicago.”

The Raptors have one game remaining against DeRozan this season, travelling to Chicago on March 21. The full episode with DeRozan is available via Sportsnet NOW in Canada, or via YouTube in other markets.