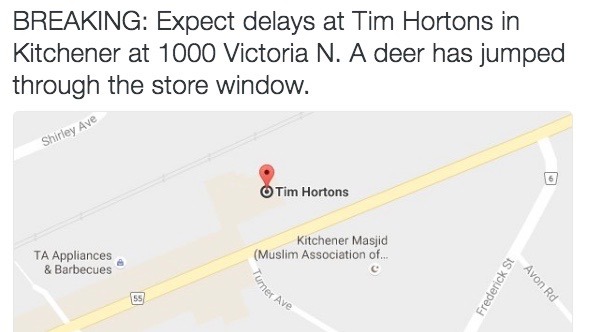 Expecting delays while driving is nothing new.

Sometimes it’s due to bad weather, heavy traffic, or a car accident. But seldom is your delay the result of a deer crashing through a Tim Hortons window.

Only in Canada, eh?

According to 570 News – Kitchener, around 12 pm today a doe leapt through the coffee shop’s window:

BREAKING: Expect delays at Tim Hortons in Kitchener at 1000 Victoria N. A deer has jumped through the store window. pic.twitter.com/HzOhjelrZg

But it’s not all fun and games, so leave your drive-thru window and doe-nut jokes behind, because this deer tragically died during the incident.

570 News – Kitchener spoke with Gary Bose of the KW Humane Society who had this to say:

“The female deer had been hit by a vehicle near the Tim Hortons on Victoria Street, and it ran into the parking lot and briefly collided with another vehicle. From there, it went right through the window of the Tim Hortons and right inside. When we arrived, the deer was severely injured by either the vehicles or the window. We had to humanely euthanize the animal on site.”

The store has been closed for the day. As has the right to tell a Bambi joke until further notice.