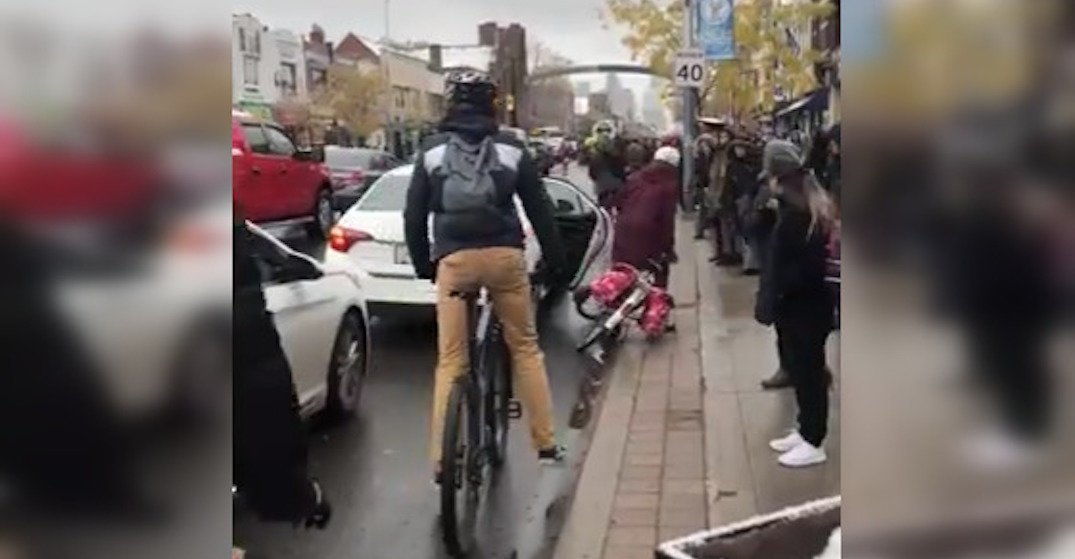 It’s no wonder why people are afraid to ride their bikes on city streets in Toronto.

A cyclist is lucky to not be seriously injured after being struck by a fast-opening car door on Toronto’s Danforth Avenue this week.

A short video clip of the instance was shared on Twitter on Thursday morning and it has sparked an online discussion about the dangers of riding bikes in the city.

The brief clip, which has already been seen nearly 14,000 times, shows a lineup of vehicles idling in traffic along a curb on Danforth Avenue.

In the clip, you can see a cyclist pass a white sedan on the right, as another cyclist trails closely behind.

As a second cyclist approaches the vehicle, the rear passenger’s door abruptly opens, knocking the cyclist to the curb.

As the cyclist is struck, you can hear her scream before shouting, “stay in the god damned car.”

This is what 15 years of #PoliticalWill looks like in #TorontoDanforth on Danforth Av. From Jones Av to Broadview Av I saw two doorings and probably dozen near misses of cyclists and pedestrians. Fix this! (Of note I did catch up with her. Banged up but ok) Cc: @PaulaFletcherTO pic.twitter.com/1CpCi4SG14

“This is what 15 years of political will looks like in #TorontoDanforth on Danforth Ave.,” wrote the owner of the video on Twitter.

“From Jones Ave. to Broadview Ave. I saw two doorings, and probably a dozen near misses of cyclists and pedestrians,” he continued, tagging Ward 14 councillor Paula Fletcher. “Fix this! (Of note I did catch up with her. Banged up but ok).”

“Row of cyclists riding together, ringing bells, hugging the curb, mid-morning, mid-block, and someone STILL gets doored. What more are cyclists supposed to do without ANY infrastructure supporting their safety?,” wrote one user on Twitter.

“This is why I’ve stopped biking in Toronto. A combination of carelessness, distracted driving, and a fresh wave of anti-cyclist hostility with drivers purposely swerving and menacing cyclists,” wrote another user.

The timing of the incident fell on the same day that Danforth-area residents met to discuss safety for both pedestrians and cyclists.

The meeting, which was held at Monarch Park Collegiate, discussed the Danforth “Complete Streets” study, which is being conducted until June 2021 and focuses on transportation services, economic development, and planning.

400 residents out at Monarch Park CI for the first meeting of the Danforth Study! Will post presentation on line tomorrow pic.twitter.com/bud28Ezzfz