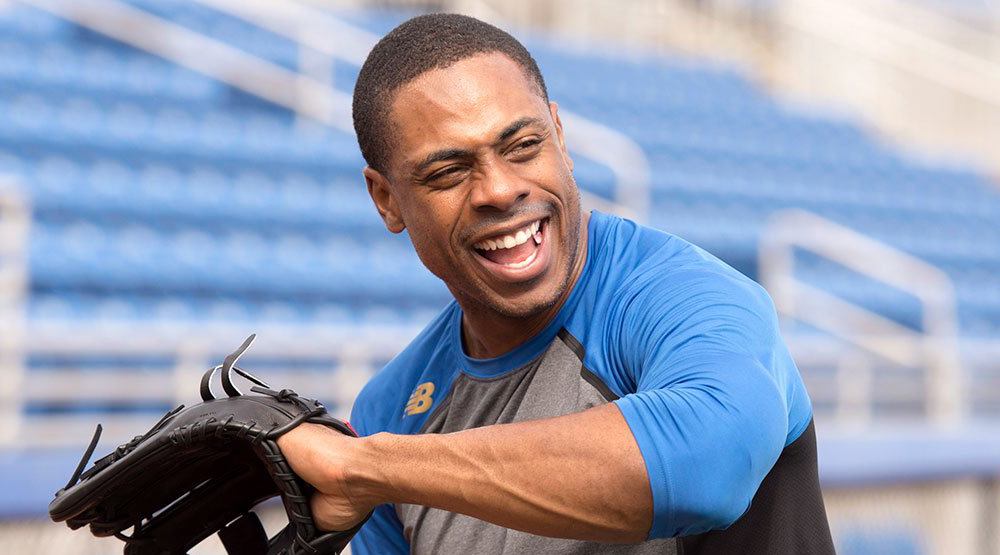 Every Toronto Blue Jays fan has their favourite player.

Maybe you’re a Donaldson devotee. Perhaps you’re a “Stro Show” supporter. Or, you could be a Martin maniac.

Even if you already have a player to call your own, it’s time to make room on your mantle for one more: Curtis Granderson.

The veteran outfielder signed a modest one-year, $5 million deal with the Jays in January. When all is said and done, his stay in Toronto will be brief, but Granderson has an uncanny way of making a positive impact no matter which city he plays in.

Granderson is charismatic, generous, and even at 36 years old, he still has some gas left in the tank. Just a few reasons why he should become your favourite new Blue Jays player.

Whether it was during his days in Detroit, wearing pinstripes for the Yankees, or hitting bombs for the Mets, Granderson is known for his uncanny ability to send baseballs into the stands.

Six games into Spring Training and Granderson already has a pair of home runs under his belt. In fact, he wasted no time at all, going yard in his very first game as a Blue Jay back on February 23rd.

Now that’s what you call a grand first impression! pic.twitter.com/yTT2wRHE8E

The Blue Jays outfielder has 20 or more home runs in 10 of his 14 years in the big leagues. If he gets a decent amount of playing time in left field this year, he should have no problem crossing the threshold of 11 seasons with 20-plus home runs.

Wrestling was at its peak during the 80s and 90s and wrestling moves were often unsafely recreated in living rooms and basements everywhere. Heck, who didn’t use their siblings as sparring partners to perform a top rope elbow drop?

Like many youngsters growing up in that era, Granderson caught the wrestling bug as a kid and is a self-professed wrestling nut. His affinity for sports entertainment is well-documented and the former All-Star loves a solid wrestling match just as much as the everyday Hulkamaniac.

3. The man has a heart of gold

Granderson’s been a big contributor for his teams on the field, but his greatest impact may actually be off the field. He’s a proponent of giving back with his charity “Grand Kids” which assists less fortunate children with nutrition, education and fitness programs.

He’s a two-time winner of MLB’s Marvin Miller award which honours the player who “most inspires those in the fraternity of baseball players through his contributions on the field and in the community”. It’s very apparent why Granderson is one of baseball’s true “good guys”.

The All-Star outfielder even wrote a children’s book: “All You Can Be”, grounded by inspirational messages for young kids.

The 🎁 that keeps on giving.

Oddly enough, Granderson crossed paths with one his current Blue Jays teammates, Gift Ngoepe. Back during his days with the Tigers, Granderson was in South Africa to promote the game of baseball as one of MLB’s International Ambassadors. Lo and behold, Ngoepe was one of the attendees and the two players crossed paths again some 12 years later.

The Blue Jays outfielder does a lot of charity work, but he’s also a vocal member of the MLB Player’s Union. Along with many other high profile players, he represents his brethren and fights for their rights at the bargaining table.