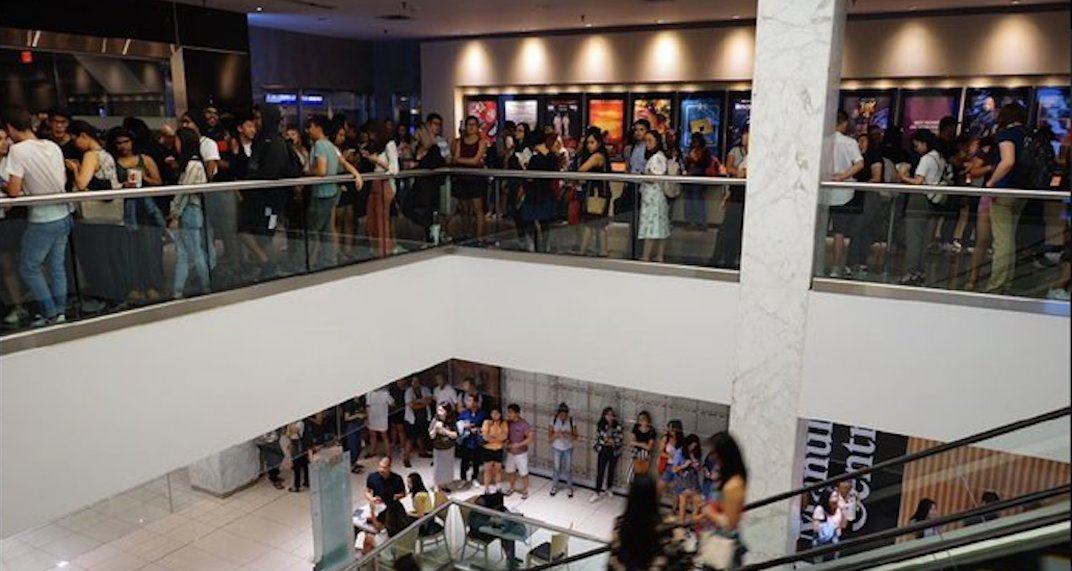 Canadian actor Simu Liu continues to be the talk of the town this week.

Liu first made headlines over the weekend for being named Marvel’s first-ever Chinese superhero and will star in Shang-Chi and the Legend of the Ten Rings, which is about Shang-Chi, the master of kung-fu.

Then on Monday, the Kim’s Convenience actor shared that he rented a number of theatres at the Varsity Cineplex in Toronto on July 23, so 500 fans could join him and watch a special screening of The Farewell, a new film starring his Shang-Chi and the Legend of the Ten Ring’s co-star, Awkwafina.

And it’s safe to say that fans were ecstatic about the opportunity to not only see Liu up close in person, but also enjoy the movie screening with him.

Fans lined up for hours, with massive crowds taking up over two-floors of the sprawling Manulife Centre for their chance to claim a ticket and see Liu.

The line has moved to the lower level!! pic.twitter.com/S3wC01kUdG

Here’s the lineup outside Varsity Cinemas in Toronto to see @thefarewell @ 9:30pm in the theatre bought out by @SimuLiu. What an awesome gesture to support future co-star @awkwafina & Asian-led cinema. #Toronto

Headed into the 7pm show and very excited. pic.twitter.com/wB9pw62JWw

Guys, I missed the Q&A for @thefarewell last week and was so saddened by it. Now I’m lining up for a ticket because @SimuLiu bought out the entire theatre! pic.twitter.com/MqBvn9ua4O

What a turnout! #SimuLiu, just cast as #Marvel Superhero #ShangChi, gets a hero’s welcome home! He bought-out the 9:30 screening of acclaimed #TheFarewell starring upcoming Co-Star #Awkwafina, treating fans to a free movie! Never seen a crowd like this ever at The Varsity! pic.twitter.com/ayxIXNJHaZ

Liu had the privilege of giving the film’s opening speech and told the audience that “Asians need to be represented better on screen.”

.@SimuLiu, aka the newly minted Shang-Chi was in the house to introduce the wonderful @thefarewell. He says Asians need to be represented better on screen. He also said we should channel “Big Asian Energy.” pic.twitter.com/GcRpIsJBSU

“I can’t describe to you how amazing this film is; the emotional truth of the story cut through to my very core, propelled by the amazing work of Awkwafina and Thumbelulu,” wrote Liu on Instagram.

“The reason that films like The Farewell (and yes, Shang Chi) are so important to me are because they speak to the differences between Eastern and Western raised Asians.”

Thank you to everyone who showed up for our #GoldOpen screening of @TheFarewell! I can’t describe to you how amazing this film is; the emotional truth of the story cut through to my very core, propelled by the amazing work of @awkwafina and @thumbelulu. The reason that films like The Farewell (and yes, Shang Chi) are so important to me are because they speak to the differences between Eastern and Western raised Asians. It recently occurred to me that I was very out of touch with what was happening in my home country of China, and it made me feel a bit sad. I consider myself proudly Chinese-Canadian, yet I cannot speak to the experiences of my brothers and sisters across the ocean. In turn, I feel that it’s probably true that many native Chinese have difficulty understanding the struggles of identity and belonging that defined my formative years in Canada. It is my genuine hope that these movies will bring us closer together by opening a dialogue through which we can share culture with each other, and with the whole world. #ShangChi will be an awesome badass movie that’s for EVERYONE; but of course it will have a special significance to both West and East-raised Asians. I cannot wait to delve deeper into my roots and learn more about my amazing heritage. #BigAsianEnergy!!! 📸 by @tonyesra