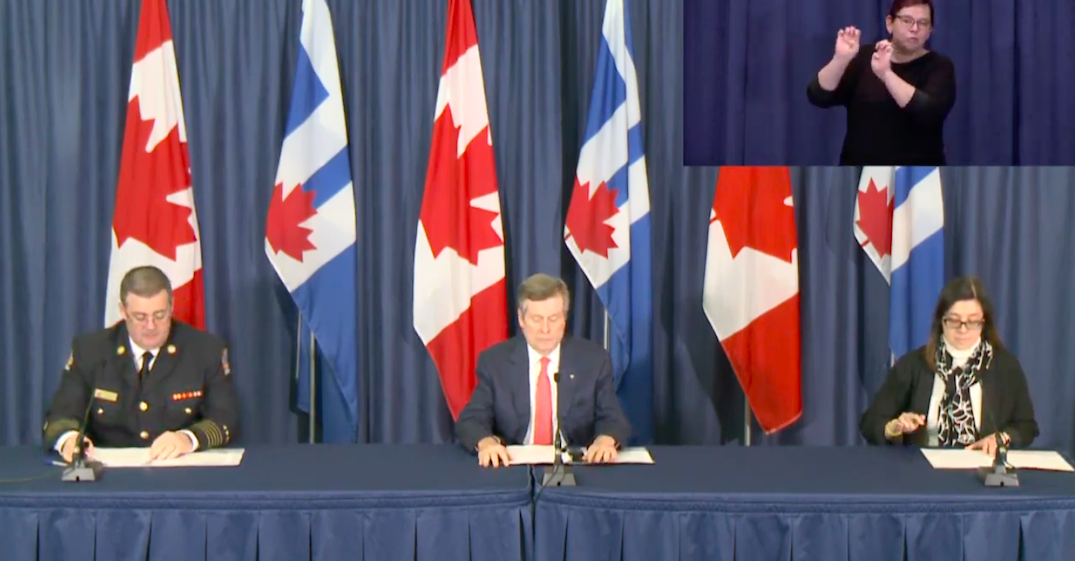 On Monday, the city confirmed an increase in cases, with 92 reported deaths. There are also 210 patients hospitalized and 80 in ICU.

Dr. Eileen de Villa also confirmed that around 20% of cases are contracted from community spread, making the need for physical distancing on sidewalks all the more apparent.

Tory said he is considering making some sidewalks in the city that experience heavy pedestrian traffic, one-way; meaning that one side of the street would head northbound, while the other side would go southbound.

“I would ask people to call 311 because we need that information in order to make a decision about something like one-way sidewalks,” he said.

Over the weekend, a Toronto resident created a “Social Distance machine” — a contraption that ensures he stays at least two metres from others — calling on the mayor to close down major streets, like Yonge Street, and make it a car-free zone to keep residents safe when walking.

Daniel Rotsztain, an artist, writer, and cartographer made a video showing him walking through Yonge Street and Kensington Market with the contraption. The video proved that he was unable to safely walk on the sidewalk with the recommended two metre distance.

Made a Social Distance machine to show why @cityoftoronto needs to close major streets like Yonge during COVID-19. Our sidewalks are too narrow to keep a safe distance.
Tell @JohnTory and your local councillors: #streets4peopleTO!https://t.co/uUmYOxOGZv pic.twitter.com/ZiCwuSECx9

The mayor said that while there has been a call to make some major streets car-free zones, he will not enact that measure.

“I will not close down major streets and make them car-free,” Tory said.

Compliance with physical distancing in parks and public squares

Tory also acknowledged that residents are starting to take physical distancing measures seriously in parks and public squares, with more following the laws over the long weekend.

“Compliance did improve this weekend, but there are some people who still haven’t gotten into these lifesaving measures,” Tory said.

The mayor provided updated numbers on the amount of tickets issued over the weekend at 107, for residents who did not follow physical distancing measures.

From April 2 to April 10, the city enforcement team has issued 2,576 warnings and 88 parking tickets.

Since Saturday, there have been 56 provincial tickets with and six parking tickets and 623 cautions given.

While Toronto residents continue to comply with physical distancing measures in public spaces, other parts of the city are experiencing increased hardship.

Toronto’s Chief Medical Officer said the impacts on the long-term care homes are having a “devastating impact on our loved ones.”

“We know the disease spreads faster in congregate settings, like long-term care homes. And residents are generally older and more vulnerable to contracting the virus.”

However, de Villa did mention that the stringent measures are starting to have a “positive effect” and the rate of new infections is slowing in long-term care homes where the rate was generally high.

“There is a tremendous amount of effort involved to keep these outbreak measures.”

As of April 13, Ontario confirmed 89 outbreaks in long-term care homes across the province.

De Villa also noted that there are 25 confirmed cases in the shelter system, another vulnerable demographic — a comprehensive update will be provided on April 14.