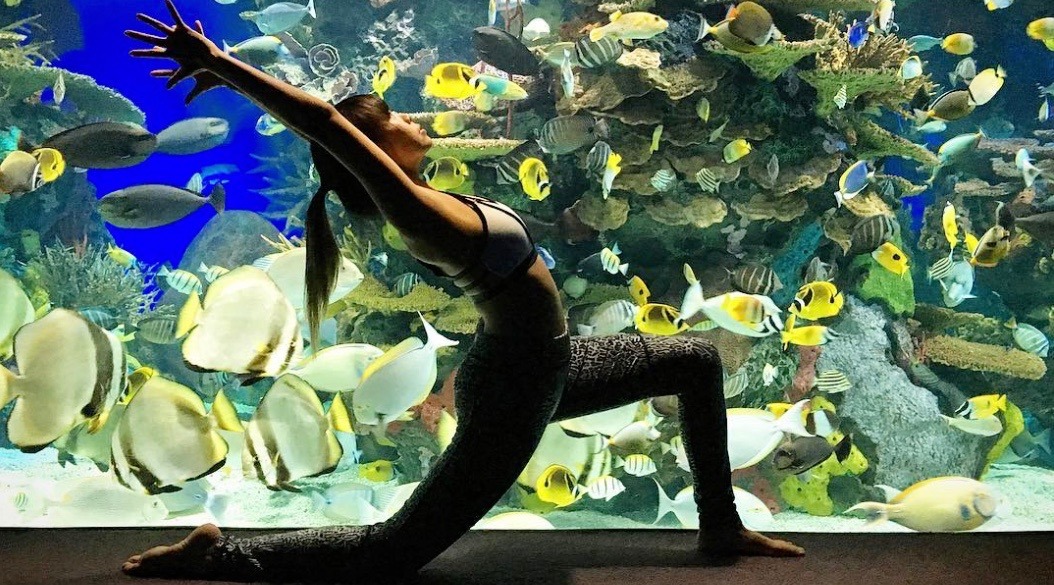 Yesterday, thousands of yogis came together to celebrate the ancient spiritual practice of yoga in the UN recognized International Yoga Day.

While many traditionally do yoga at a studio, the practice can take place anywhere you want. As long as you can create that balance between body and mind you can practice next to a roaring waterfall or in the middle of the street.

Summer introduces a number of cool and unusual environments where you can do your Sun Salutations. From a rooftop, restaurant, concert venue, brewery and in the middle of Lake Ontario, there are plenty of places to say Namaste in Toronto.

Harmony Yoga at The Royal Conservatory of Music

Taking place in the Temetry Theatre this class is accompanied with live classical music played on a piano. The music travels throughout the room at a tempo varying from largo to adagio with the volume at calm mezzo-piano. Not to mention the large windows allow for the rising sun to shine in.

Where: 273 Bloor Street West
When: Wednesdays and Fridays at 7:30 am | Tuesdays at 12 pm
Price: Single session $20 or an introductory one-month special $45

While uneven cobblestone is not the most ideal surface, it hasn’t stopped people from showing up to OmT.O. every weekend after the Summer Solstice. This full day event has multiple sessions hosted in the heart of the Distillery District among all its beautiful heritage buildings.

The Tipsy Teachers from School House Booze want you to get #bendyforbeer. Train to become a beer yogi with a one hour yoga class in a brewery followed by a one hour guided beer tasting. Their summer season starts at Indie Ale House, followed by classes at the new Rorschach Brewing in August and Henderson Brewing in September. Ticket information is coming soon.

If you have terrible balance skip to the next item on this list because Toronto Island Sup trades your yoga mat and the ground for a paddleboard and water. Taking place on Lake Ontario by the Toronto Islands, there is no better backdrop than the setting sun over the Toronto skyline.

Where: Toronto Islands (meet at Wards Island Ferry)
When: Every Sunday in July and August at 6:30 pm
Price: $45 per class

The Drake Underground never sleeps. Whether it’s hosting dance parties or performances by the next big musical act, the venue is guaranteed fun. It’s also a perfect place to bring clarity to the mind with unique sessions like their past Drake and Harry Potter themed yoga. Coming up next is Ma’ Babe Yoga where parents can move their body and bond with their little ones.

Yoga in the Garden at Toronto Botanical Garden 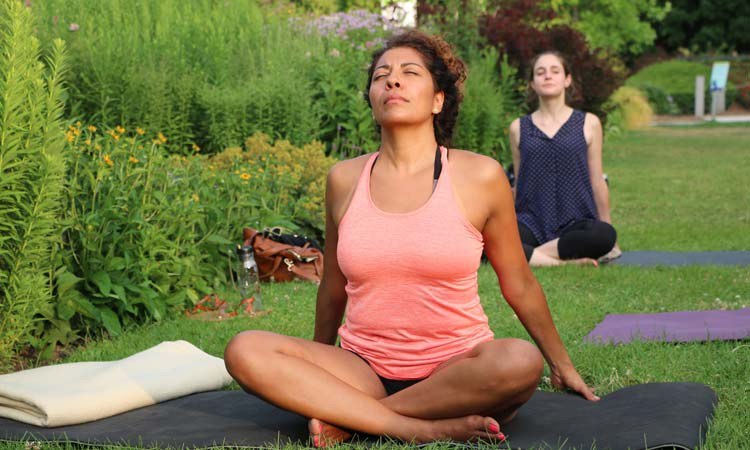 There’s no better way to connect your mind, body and soul to mother nature than being surrounded by the lush flowers at the Toronto Botanical Garden. Take a deep breath and inhale the sweet floral smells and stare up at the blue sky as you lie Shavasana.

While the Austin’s likely didn’t do yoga at their beautiful 1886 built three-storey home, yoga enthusiasts can with a Hatha yoga class guided by instructor Diane Grundy. Upcoming classes at Toronto’s Downton Abbey are all outside, but sometimes they’ll host a class in one of the historic rooms.

Celebrate the weekend and patio season with a Light Flow yoga practice followed by a delicious chef inspired lunch. Liberty Life Yoga and Christine Noonan Yoga join forces for an all level practice where you’ll connect with your inner self and a ton of new people over a bite to eat.

The library is already a peaceful place to study and read, so why not also do yoga? Join the Junction and High Park community as they work their way through a class designed for all levels. No registration required.

Yoga Unplugged at the Thompson Hotel with 889 Yoga and lululemon

Yoga on the Thompson Hotel rooftop is back for another year with teachers from 889 Yoga and lululemon. Each week yogis can flow to the beat of a new DJ and take in the sun.

Yoga at Ripley’s Aquarium of Canada

Feel like you’re swimming through your yoga poses with morning classes at Ripley’s Aquarium of Canada. The class provides a tropical under the sea setting in either the vibrant Rainbow Reef or Ray Bay.