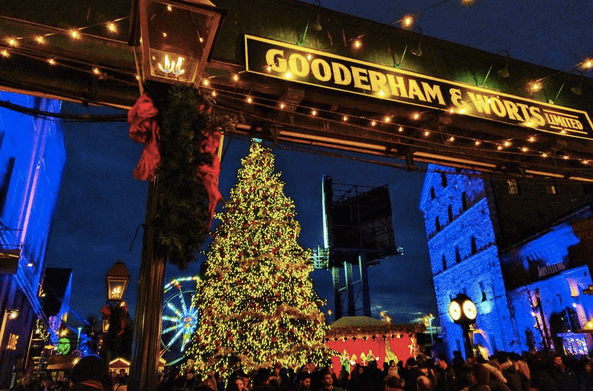 Tis the season for everything Christmas in Toronto.

From Santa, to carolers, and holiday markets, there is something for everyone. Naughty or nice, these events are for you!

Toronto’s Christmas Market brings the spirit of the season to life! One of Toronto’s favourite holiday events, guests are invited to rediscover the magic and romance of Christmas by taking in stunning light canopies, enjoying unique shopping experiences, traditional music and dance performances, and activities for the whole family to enjoy. If you haven’t checked it out yet, make sure to head down soon.

Soulpepper’s beloved production of A Christmas Carol has become a Toronto holiday tradition. Follow Ebenezer Scrooge as he is visited by three ghosts who help him understand the importance of charity in the holiday season.

Where: Young Centre for the Performing Arts, 55 Mill Street
When: December 2 at 4:30 pm

thisopenspace and Hermann & Audrey have teamed up for Wish List; a holiday gift pop-up shop opening this weekend! Wishlist features five different brands: Frank + Oak, KOTN, Bobbies, Mary Young, and Chance & Fate. This is a one-of-a-kind unmissable shopping destination for everyone on your list.

Where: Union Station, 65 Front Street West
When: December 5 to 16

The Elves are almost back in town! This year #TCM16 will have 23 Elves visiting all the way from the North Pole. All together, they’ll be making us laugh, smile and dance around for over 2000 hours.

The evening program by the renowned 30-member Canadian Staff Band will include carols and other works that capture the mood of the season — from the contemplative nature of Biebl’s Ave Maria, O Holy Night and Who is He in Yonder Stall to the joy expressed in The Sussex Carol and Ding Dong Merrily on High. Audience members will also be invited to join in the popular sing-along of favourite carols.

Where: Nathan Phillips Square, 100 Queen St West
When: December 8 to 23

This outdoor market will feature a collection of seasonal and artisan vendors, live music, food and drink, a warm-up lounge hosted by Jack Astor’s and a strolling Santa.

The Twelve Days of Christmas

Where: Roy Thomson Hall, 60 Simcoe Street
When: December 9 and 11

Over 60 vendors, entertainment, and Christmas cheer awaits you at Harbourfront Centre! Don’t forget to check out the DJ skating nights while you’re there.

Where: Harbourfront Centre, 235 Queens Quay West
When: December 9 and 18

A Victorian Christmas at Mackenzie House

This festive season take a step back in time to Victorian Toronto and experience the magic of a traditional Christmas in an 1859 row-house. Escape from the hustle and bustle while you enjoy a sample of mulled cider and a biscuit in the warmth of the historic kitchen. Discover the story of how families celebrated Christmas in 19th century Toronto as you tour the Mackenzie home dressed in greenery for the holidays.

Where: 60 Bond Street
When: Now until January 8

They made a list and checked it twice–of 12 local breweries, naughty and nice – to join the annual all-you-can-taste, beer-drinking extravaganza. Throw on your ugliest Christmas sweater and cross a beer (or 12) off your list. There will be live music, DJs, and enough suds to give Santa’s village a hangover.

It’s almost the time of the year again! Get ready for some holiday fun all month of December at Casa Loma. Happy to announce we will be open late every Wednesday evening from 5pm to 9pm in December for our Winterland Nights -showcasing our glamorous light display in the gardens! Details soon to follow on: www.casaloma.ca @libertygroup #casaloma #toronto #castle #holiday #festive #tistheseason #lightdisplay #wednesdaynight #december #openlate #winterland #tbt

This holiday season, join Santa for breakfast under the sea. Ripley’s Aquarium of Canada will be hosting a mouth-watering breakfast with Jolly Old Saint Nicholas. Tickets include: breakfast, complimentary coat check, a family photo with Santa, general admission to the aquarium, and a gift for your child to take home.

A magical evening of lamp-lit rooms, decadent desserts and carollers. Space is limited for this fundraising event – early bookings recommended.

Where: Four Seasons Centre for the Performing Arts, 145 Queen Street West
When: December 10 to 31

Delivered in partnership with Etsy Canada, the Makers Market is the place to find locally-crafted gifts, treats and other surprises! With new vendors every day, you’ll be sure to find something for everyone on your list.

Where: Evergreen Brick Works, 550 Bayview Avenue
When: December 10 to 23

Start crossing names off of your Christmas list at the Gladstone Christmas flea market. Here you’ll find artist goods, reclaimed vintage, craft, jewelry, clothing and so much more for everyone on your list.

Jann Arden & the Toronto Symphony Orchestra are uniting! With her warm voice, witty personality, and legendary charm, Jann Arden offers a memorable assortment of timeless numbers and audience favourites. The TSO is joined by the Etobicoke School of the Arts Chorus, under the baton of TSO Principal Pops Conductor Steven Reineke.

Where: Roy Thomson Hall, 60 Simcoe Street
When: December 13 at 8 pm

This 2-hour holiday cruise through the Toronto Harbour will include food stations, a costume contest (ugliest outfit wins!), and a complimentary Bad Santa photo booth.

Because what is the holiday season without a little Kevin McAllister? Clearly a fan fave, this is the third annual Hot Docs Home Alone Quote-Along. Get ready to get rowdy!

Where: Artscape Youngplace, 180 Shaw Street
When: December 16 to 18

Get those skates out, #Toronto! We’re happy to announce that the #NatrelRink is officially open!

Where: Roy Thomson Hall, 60 Simcoe Street
When: December 18 at 3 pm

Bunz Flea is back with a Holiday edition, which promises to be even bigger and better than the last one! We will be able to house even more vendors this time, and there promises to be something for everyone, as well as plenty of trading!

Celebrate the holiday season at the City of Toronto’s annual Christmas Concert. Beginning at 11:30 am in the Rotunda of City Hall, the concert will feature local choirs: All the King’s Voices, Toronto Beaches Children’s Chorus and Toronto Mass Choir. They will be joined by the Tower Brass and organist James Bourne, while popular Toronto media personality Adam Wylde will once again emcee. As always, Santa Claus will make a special guest appearance.

And of course, for those who want to pay the edgier and trendier Santa a visit, Yorkdale’s Fashion Santa will be back to take photos this holiday season. Yorkdale will be donating $1 to SickKids Foundation for every selfie shared using #FashionSanta2016.

Where: Yorkdale Mall, 3401 Dufferin Street
When: Various dates throughout December