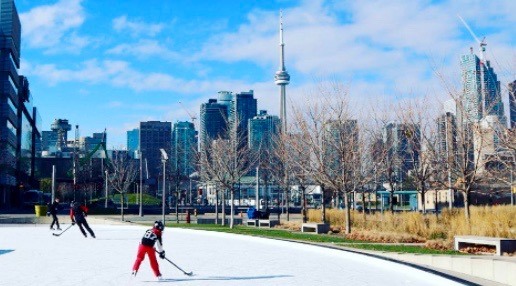 Well, it’s officially time to dust off your old skates and hit your nearest rink – skating season has arrived.

This winter, there will be 48 skating rinks open in the Greater Toronto Area, so regardless of where you live there there’s a rink or two near by.

Currently, there are as many as 30 outdoor skating rinks open across the city and many more are expected to open by December 3rd as temperatures begin to drop.

Holiday lights, fireworks, live performances and a tree-lighting ceremony. The 50th annual Cavalcade of Lights officially kicked off the holiday season this past weekend. What are your favourite things to do in #Toronto during the holidays? #SeeTorontoNow 📷 @jayeffex

This winter, Nathan Phillips Square will be transformed into a whimsical European Christmas market and getting to skate amidst the decorations is just an added bonus. The skating rink is open until 10 pm every night this winter.

This outdoor rink is surrounded by lush greenery and is truly an escape from the chaos of the city. When the sun goes down the twinkling lights come on, you’ll surely be in for a skate to remember. This skating trail is family friendly and open on weekends.

For those interested in playing a game of shinny, look no further than Greenwood Park. This large rink is actually the City’s first covered outdoor ice rink. There is also a ice skating trail located beside the ice rink for those who want to skate at their own pace.
Status: Now Open
Where: 150 Greenwood Park

First skate of the season

Toronto’s favourite hipster park is still a hotspot, even in the winter months. The park’s outdoor rink is great for a game of pick-up puck or for those looking to unwind with an evening skate. Just make sure to check the rink’s info page to see what days feature public skating or hockey.

This Bloorcourt comes equipped with two side-by-side skating rinks. This is great for those who want to play a game of puck followed by a leisure skate. Their rink schedule features something for everyone, with hockey available for beginners to adults.

These are the nearly 40 remaining Toronto rinks to check out this winter: