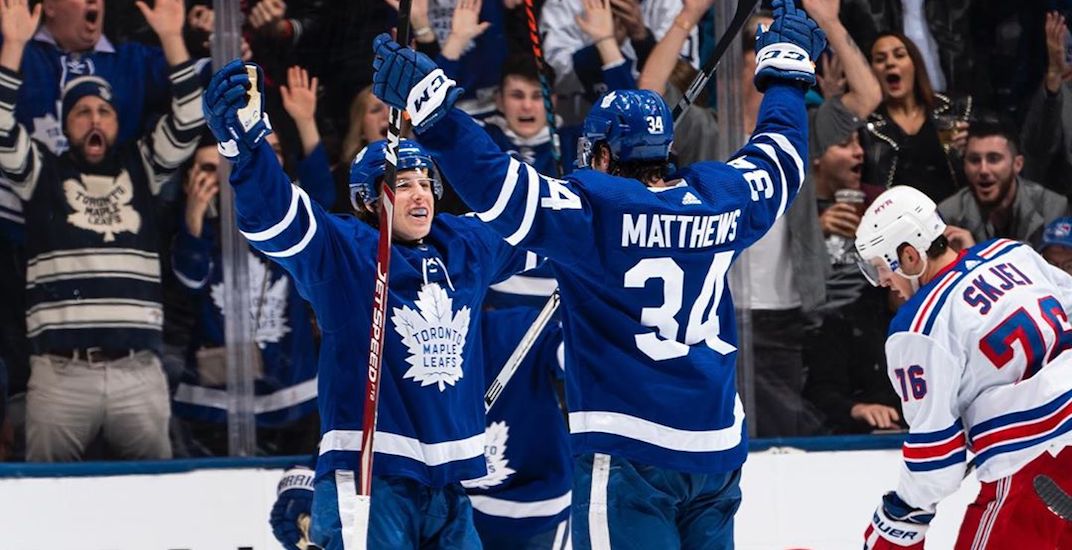 When all is said and done with this iteration of the Toronto Maple Leafs, it’s unlikely many managerial moves will be remembered more than the firing of Mike Babcock, and the subsequent promotion of Sheldon Keefe.

Since promoting Keefe from the AHL’s Toronto Marlies, the Leafs have gone 15-5-2 and are no longer in the critical situation they saw themselves in during late November: out of a playoff spot and on a six-game skid.

But the Atlantic Division has mostly normalized to preseason predictions, with Boston, Tampa Bay, and Toronto once again occupying the division’s top three spots.

For the better (and occasionally for the worse), here are six things that have changed under Keefe:

1. Matthews is playing more, and scoring more too

It might just be luck, but Auston Matthews has been on an absolute tear since Keefe’s promotion, with 17 goals and 27 points in 22 games. Currently behind just Boston’s David Pastrnak in the Rocket Richard race, Matthews’ 30-goal season so far has him on pace to break the Leafs’ single season goal record of 54.

Matthews’ ice time has jumped from 19:50 a night under Babcock to 20:42 under Keefe. While less than a minute may not seem like a lot, Matthews’ 11 lowest ice times under Keefe are all in wins — showing that #34 gets rested when the Leafs might have the game locked up, but is kept on the ice in the key moments when they may be fighting to stay in a close game.

This was most evident on Wednesday night, when Matthews played a season-high 25:41, scoring the tying goal in the final seconds of regulation.

Although no one would argue about Toronto’s quality of top-end forward talent, the pairings had grown a little stale to begin the season. Keefe hit the blender and paired William Nylander alongside John Tavares and Mitch Marner alongside Matthews, with a rotating cast filling the third spot on each line.

The results have been great for both wingers, as Marner’s 24 points in 16 games under Keefe and Nylander’s 21 in 22 have them both on pace for their highest point-per-game numbers of their career.

3. The power play has improved

Assistant coach Paul McFarland, who was brought in from the Florida Panthers this season and assigned the the power play duties, was getting plenty of flak to begin the year, as the Leafs ranked 18th in the league on the man advantage at the time of Babcock’s departure at a rate of 17.6.

While it’s not 100% clear if the changes are Keefe’s or McFarland’s, you won’t be hearing that same noise now as the Leafs’ power play has climbed to sixth in the league overall, and first in the league. In Keefe’s tenure specifically, the Leafs are firing at 33.3% clip, the best in the NHL over that span.

For many NHL teams, their backup goaltending model seems to be “survive and move on.” But, with losses in his first six starts, with just a single point picked up, the Leafs weren’t doing a whole lot of surviving when Michael Hutchinson was in net.

But Keefe flipped the script on Babcock’s mantra of only playing his backups in the second half of back-to-backs, trying out Hutchinson in both the first half as well as other matchups against weaker opponents.

Whatever the case, “Hutch” has at least stabilized the position somewhat, with three wins in his last three starts. It seems unlikely that he has a future with the team past this season, but if the Leafs can survive another few months with him, the rough start shouldn’t affect the overall makeup of this team too poorly.

While you’ll always get some complaints the Leafs being too offensive-minded, Keefe’s adjustments have made the Leafs look cleaner in all three zones.  Tyson Barrie has scaled back his pace of three goals in Keefe’s first three games, but has found his groove after a shaky start to the season.

Justin Holl, who infamously sat 70 games in the press box last season without being sent down to the Marlies, did enough earn himself a shiny-three year contract extension. And smooth-skating Travis Dermott, who started the season on injured reserve, has seen his ice time jump up from 13:18 a night under Babcock this year to 15:20 under Keefe.

While the Scotiabank Arena may not be the NHL’s loudest building on most nights, it’s no secret Leafs fans spread everywhere can make a big stink when the team isn’t performing well. And despite being a well-respected name in the hockey world prior to his hiring, Babcock had grown sour with Leafs fans young and old.

While Keefe’s main key to keeping the fanbase happy is to keep on winning, he’s done enough of that so far to mask any major issues the team might have.