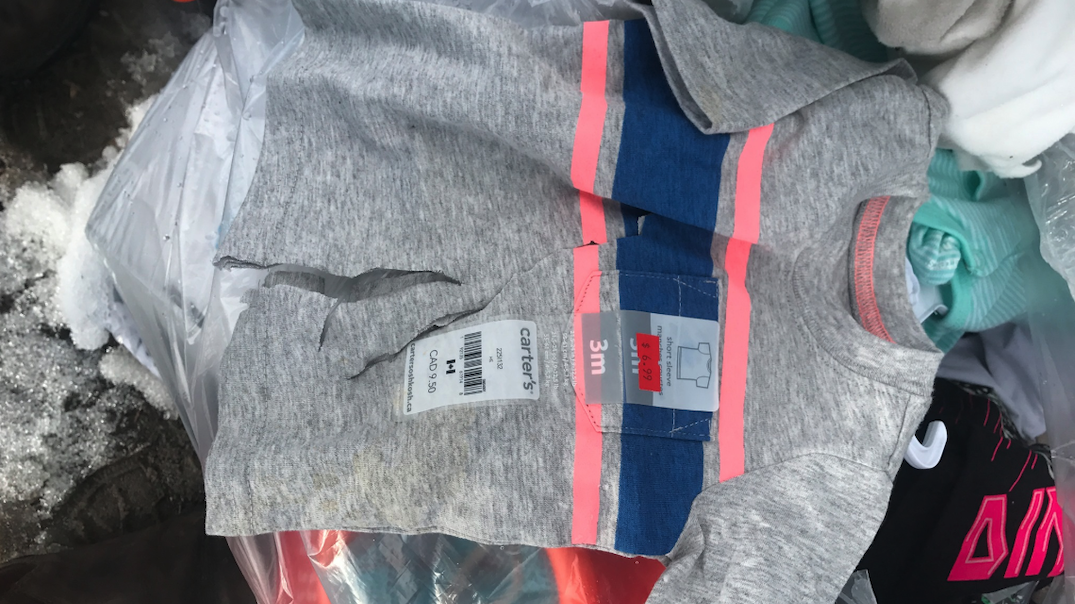 A social media post showing brand new baby and children’s clothes thrown into the garbage outside of Dufferin Mall has gone viral in Toronto.

Natasha McKenna made a Facebook post on Tuesday, sharing photos of ripped up clothes with tags on them, allegedly from Carter’s OshKosh B’gosh’s Dufferin Mall location.

“Was so disappointed to walk by garbage bags yesterday full of brand new baby and children’s clothes, toys, shoes, and other items from Carter’s OshKosh B’gosh Carter’s OshKosh B’gosh Canada.. but they weren’t just thrown out, they were destroyed so they couldn’t be used by anyone,” wrote McKenna, in the post that has been shared almost 10k times, gaining nearly 5k reactions.

“I’d heard of this practice in retail and fast fashion and it made me sick as I dug through the bags by the Dufferin Mall to find sliced shoes, smashed picture frames, cut up onesies and ripped up snowpants and gloves.”

McKenna continued to call this a waste of clothes, which could be donated to charities and families in need.

“It’s business practices like this that tells you this company cares more about profits than the children and families they market to,” she said. “They don’t care about kids and they don’t care about the environment kids will inherit by sending these clothes from the rack to the landfill.”

A Carter’s employee allegedly responded to McKenna, stating that they are instructed to “cut up items that are returned damaged or is somehow damaged on the floor.”

“I won’t be shopping at carter’s Oshkosh until the wasteful practice of destroying unsold clothing is stopped,” read one comment. “It’s too bad because I like their snowpants. But if I buy them and you have extra unsold why wouldn’t you give them to children who need them and can’t afford? Don’t cut them up and put them in a dumpster.”

Another one said, “Your reprehensible business practice of destroying unsold clothing and merchandise, rather than donating it to those in need, ensures that my grandchildren will never receive any of your products from me again. Where there is this level of gross wastefulness and moral callousness in a corporation, there will likely be more to be found.”

Daily Hive has reached out to Carter’s OshKosh B’gosh but they did not responded by time of publication.