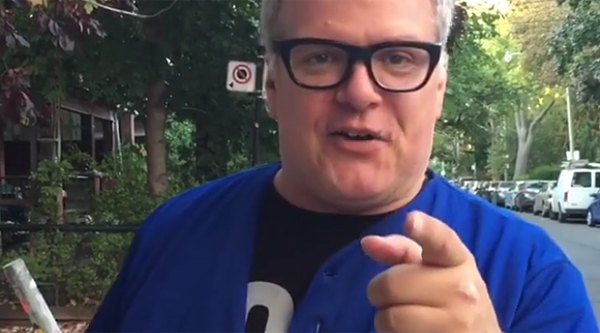 What is it about the post season that suddenly makes me want to bet off my (non-existent) first born?

Perhaps it’s the unbridled confidence in the home team? Perhaps it’s just the adrenaline rush of still playing baseball in October. Whatever it is, I know I’m not alone.

Toronto deli king Zane Caplansky is feeling it too.

When the Jays win the ALCS, the Iron Chef will be punished with a stack of smoked meat and have to spend a day in Toronto slinging deli. He’ll also have to sport Jays apparel in his restaurant back home.

If Cleveland wins (yeah right), Zane will have to wear Cleveland apparel in the deli for the day, work on the line at Chef Symon’s restaurant and eat whatever he wants to serve up.

“It’s not the worst bet I’ve ever made” says Caplansky when reached by phone, though he concedes that wearing apparel from the opposing team would be a “certain form of suffering.”

The friendly rivalry started earlier this year when the Raptors faced off with the Cavaliers in the Eastern Conference.

So what will Chef Symon serve up as punishment in the unlikely event that Cleveland wins?

“What does Cleveland have food wise? What’s their thing there?” asks Caplansky. Chef Symon is supposed to respond by video today, but whether it’s Polish Boys or Corned Beef, Caplansky isn’t worried. Not only is Symon a fantastic chef… we’re going to win anyway.