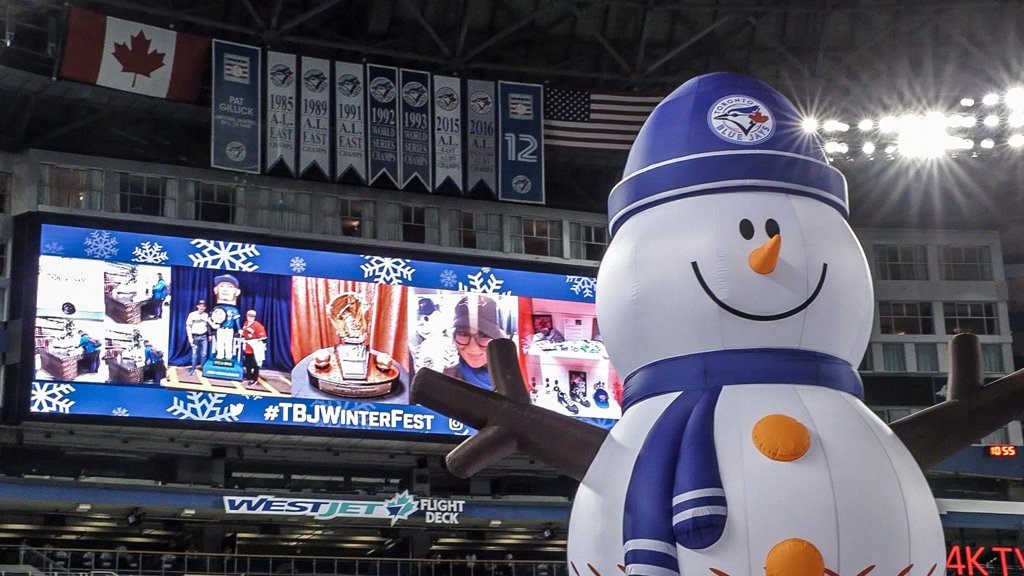 It figures… during a weekend which spotlights the boys of summer, Toronto is due to receive a wallop of winter weather. It will be cold and snowy outside Blue Jays Winter Fest, but inside the Rogers Centre, there will be a flurry of activity for fans who are eagerly anticipating the arrival of Opening Day.

Now in its second year, Winter Fest is an opportunity for fans to get up-close-and-personal with Blue Jays players, coaches, and alumni. The Rogers Centre field and concourse transforms into a winter wonderland. The club expects more than 20,000 Blue Jays fans for this two-day event, which runs from 10 am to 5 pm on Saturday and Sunday at the Rogers Centre.

By the way, tickets are still available for both days. Tickets are $20 for adults and $5 for kids and seniors. Kids under two years old get in free. For those looking to make their way down to the ballpark on either Saturday or Sunday, here’s what you can expect.

A quick heads up for people attending Winter Fest on Sunday; subway service on line 1 of the TTC will be closed from the Bloor-Yonge station to Osgoode until 12:00 pm. Best to plan alternate transportation (or leave yourself plenty of time) if you’re taking the subway on Sunday morning. 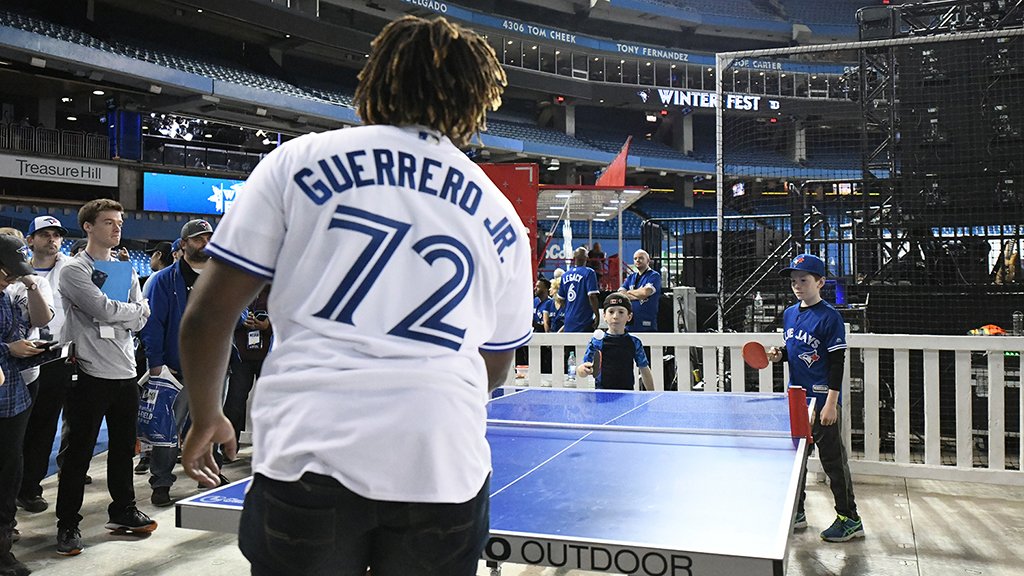 In total, more than 70 Blue Jays players, prospects, coaches, and alumni will be on hand for Winter Fest. Big leaguers like Aaron Sanchez, Randal Grichuk, and Justin Smoak have made the trek to Toronto, as have the next wave of Blue Jays superstars like Vladimir Guerrero Jr., Bo Bichette, and Nate Pearson.

Plus, there will be some beloved Blue Jays players from the past, with former World Series Champions Roberto Alomar, Joe Carter, and Devon White suiting up in Blue Jays colours. Fans can reunite with alumni like J.P. Arencibia and the recently retired Ricky Romero.

One notable omission from the festivities is Marcus Stroman, who is still rehabbing his shoulder down in Florida. However, fans will find 18 other big league Blue Jays around the Rogers Centre.

I won’t be at Winter Fest in Toronto. My program and shoulder routine is key right now and preparing down here in Florida is a necessity. I miss all of y’all. Can’t wait to feel your energy every 5th day in the Rogers Centre. Bring all the noise. I’ll be ready! @BlueJays 🇨🇦

Player autograph sessions are sold out, but fans can snap a selfie with select Blue Jays inside the “Home Run Alley” section, and kids can take a picture with players inside the Jr. Jays Park near Section 104.

Various Blue Jays players will also appear outside Section 127 at the Home Plate Zone throughout the day, both on Saturday and Sunday. No tickets are required for these photos.

In addition, players may pop by the Game Zone every so often to challenge unsuspecting fans to match of ping-pong. This young fan had the chance to go toe-to-toe with Bichette at last year’s Winter Fest.

Keep your eye on the stage

One of the most entertaining aspects about last year’s event was watching Blue Jays players come out of their shell on-stage. Instead of the typical pitcher versus batter competition, teammates faced off in various “Hollywood Game Night”-style games and the results were unexpected and hilarious.

Keep your eye on the TD stage both Saturday and Sunday for some fun events, where these Blue Jays players really get a chance to come out of their shell.

There will be some one-on-one interviews and Q and A sessions with various Blue Jays players, alumni, and coaches.

Plus, watch for Blue Jays teammates to square off in various games versus each other, including “Name That Tune” and a pop culture quiz. If it’s anything like this exchange below between Bo Bichette and Steve Pearce, fans are in for a treat.

Here’s a full schedule of the main stage events below.

There is no shortage of stations to check out at Winter Fest where you’ll find something to post to your Instagram feed. Aside from pictures with the players, fans can head for “Home Run Alley” to snap a photo with the Guinness World Record 25-foot high foam finger. Yes, that’s a thing.

From there, head to the Blue Jays dugout to get a closer look where the players spend most of their time during the regular season. Check out the 1992 and 1993 World Series trophies in person over at the Outfield Zone near Section 140 and then scoot over to the giant Rawlings baseball glove close to Section 108 to take another picture.

Everyone loves free giveaways at the ballpark and Winter Fest is sending attendees home with a few souvenirs. All fans get to take home this Blue Jays lumberjack toque.

In addition to the hat, Jays fans can score a free custom Blue Jays tote bag inside the “Home Run Alley” in centre field.