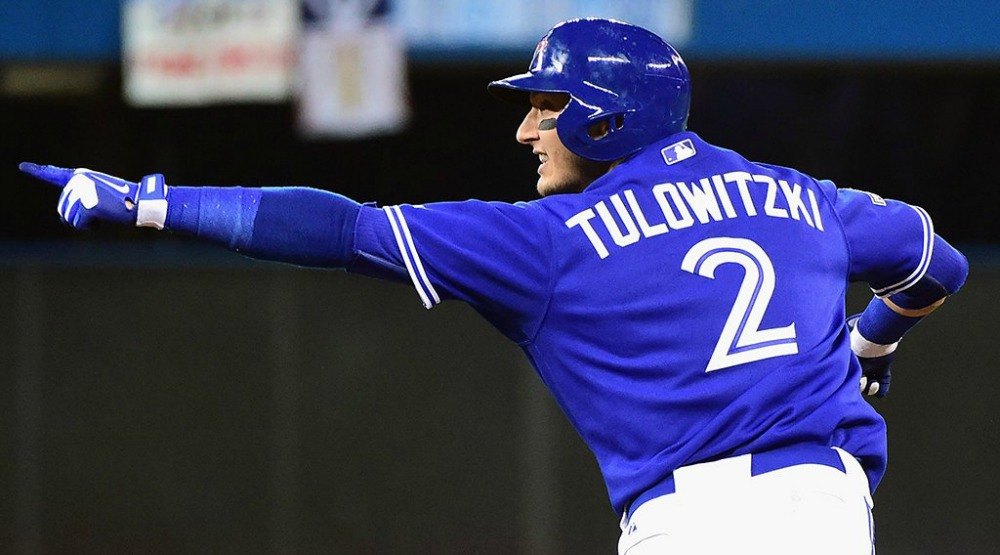 The Toronto Blue Jays’ biggest offseason acquisition thus far has been a subtraction; cutting ties with Troy Tulowitzki and the $38 million remaining on his contract.

One of the New York Yankees’ biggest offseason acquisitions? Signing that very same player to a league minimum $600,000 contract for the 2019 season. The 34-year-old shortstop officially passed a physical and will suit up in pinstripes this spring.

Photoshopped in all its glory, it’s a bizarre sight to see Tulowitzki in a Yankees uniform.

At the time of his release in mid-December, the news seemed abrupt and premature. After all, spring training wasn’t on the horizon for a few months. Although he was reinstated from the Blue Jays’ 60-day disabled list, Tulowitzki felt like a surefire 40-man roster candidate. His cost-prohibitive salary meant he was unlikely to move.

After some public posturing by both camps, the Blue Jays called Tulowitzki’s bluff and made him a free agent on December 11th. The team opted to eat $38 million in lieu of leaving Tulowitzki’s status lingering over the team. That’s a large cheque to cash just to get rid of somebody, but the Blue Jays almost had no choice.

If Tulowitzki’s health was the underlying issue, that didn’t seem to bother the reported 16 teams who showed interest after a Tulowitzki showcase took place shortly after his release from the Blue Jays. Teams like the Yankees, Giants, Athletics, Cubs, Pirates and Phillies were rumoured to be in attendance to witness the former All-Star in action.

Tulowitzki hasn’t played since July 28th 2017, nearly a season-and-a-half since he last saw Major League playing time. That’s a long time to be on the shelf, but by all indications, he was healthy enough to garner interest from half the teams in baseball and pass the Yankees’ physical.

If he looked relatively healthy, why then did the Blue Jays pay Tulowitzki to go away? It boils down to this; the Blue Jays viewed him as a part-time player, but Tulowitzki still saw himself as an everyday shortstop. Therein lied the conflict.

Tulowitzki drew a line in the sand back in August, telling reporters “if someone’s better than me, I’ll pack my bags and go home.” Just prior to Tulo’s release, Blue Jays general manager Ross Atkins more or less refuted that claim in a very candid statement, saying “I think it’s unlikely that he plays an above-average shortstop for 140 games.”

Judging by Tulowitzki’s statement, he’s steadfast in his belief that he’s a starting shortstop. From Atkins’ response, the club felt very differently. Rather than let things linger for months on end, the Blue Jays severed ties with the five-time All-Star.

If Tulo was that insistent and strong-willed about remaining an everyday player with the Blue Jays in 2019, this relationship was headed on a collision course no matter what. The Blue Jays front office merely got out in front of this situation before it became really messy.

At first glance, writing off $38 million for a player with All-Star credentials and two-plus years on his contract makes the Blue Jays look bad. Here’s a potentially bigger PR nightmare, though; a 34-year-old shortstop refusing to take a part-time role with the club and robbing playing time from the next shortstop in the pipeline. Not even Houdini himself could escape that ill-fated scenario.

Onlookers might take issue with this transaction because the Blue Jays received nothing in return for Tulowitzki and yet half of the league couldn’t wait to sign him to a deal. He couldn’t have been “damaged goods” if contenders like the Yankees wanted to bring aboard the 34-year-old veteran.

As it stands. Tulo projects to be the Yankees’ Opening Day shortstop in 2019. The Bronx Bombers haven’t been officially ruled out of the Manny Machado sweepstakes yet, but they seem genuine in their commitment to try Tulo at shortstop to begin 2019.

One more thing, the Yankees and Tulowitzki did not even discuss the possibility of a utility role, moving around positions, I’m told. Their pitch to him was fully centered around an opportunity to play short

The Yankees’ incumbent at shortstop – Didi Gregorius – will likely to miss the first half of the 2019 season as he recovers from Tommy John surgery. In the meantime, Tulowitzki will take the reins at short… unless another viable option presents itself for the Yankees.

The reality is Tulowitzki had no trade value in a Blue Jays uniform. And the only way for him to build value would be to play shortstop every day, which would come at the sacrifice of playing time for a younger player like Lourdes Gurriel Jr.

Even if Tulo was 100% healthy to start the 2019 season, there was 0% chance of him sticking around beyond 2020. There’s a very good chance that Gurriel (under team control for six more seasons) remains a Blue Jay in 2020.

$38 million is an exorbitant amount of money to pay for a player to go elsewhere, but with a relationship approaching an untenable level, it was apparently the correct decision for the Blue Jays organization moving forward.

The Blue Jays were at a crossroads with Tulowitzki; they could bet $38 million that a 34-year-old shortstop who hadn’t played in a season-and-a-half could bounce back and post respectable enough numbers to raise his trade value from nill to barely-better-than-nill.

Or, they could bet $38 million that he wouldn’t. It was the right call to make.