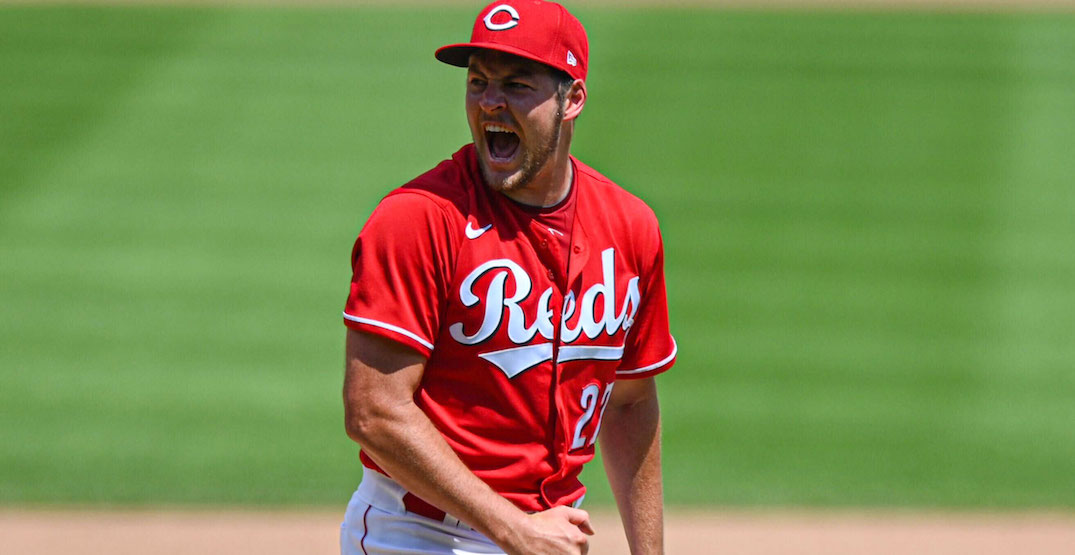 As of January 25, 2021, last year’s NL Cy Young winner (albeit in a shortened season with only 11 starts) Trevor Bauer remains a free agent.

The Toronto Blue Jays are one of the teams linked to Bauer. Pitching coach Pete Walker and high performance coach Gil Kim reportedly had a phone meeting with him earlier this month. The team has plenty of payroll space left and under normal circumstances, I would be one of the people hoping they signed arguably the best pitcher on the free agent market.

But I do not want Trevor Bauer on the Blue Jays. And I know that I am not alone in that.

Bauer has a dark social media past, causing him to issue statements about it on multiple occasions.

It’s been such an issue that it even came up in his arbitration hearing in 2019.

In Trevor Bauer's arbitration hearing, his use of social media was raised by those arguing the case for the Indians.

Among the things Bauer has done includes tweeting support for an anti-Semitic conspiracy theory, and belittling trans people.

Two years ago, after a Twitter battle with a female college student, Bauer had to issue a statement — though not an apology — promising to do better in the future.

“I often defend myself against internet trolling, bullying and slander,” he said. “My responses to fans are good-natured. I do not encourage any of my fans, followers, or friends to attack, insult or harass anyone on any social media platform, or in real life. There is no room for that in the world. I have been made aware that some of the interactions related to a specific Twitter exchange may have had a negative impact. That was not my intention. I will wield the responsibility of my public platform more responsibly in the future.”

But Bauer’s off-field conduct still has many people weary of signing him, despite his immense on-field talent.

Bauer issued another statement on Friday to The Athletic, where he denied accusations that he is a bully.

“I have always tried to be an open book and appreciate that social media gives me a platform to have an open dialogue with fans and the greater public.”

“I don’t shy away from confrontation and am often quick to defend myself, but I am by no means a bully and I take great offence to my character being called into question. I understand what comes with having a following on social media but I have never asked for nor do I condone anyone making threats or lewd comments on my behalf.”

One could ask the question — how many times does someone need to issue a statement defending their social media use if it’s used well and to do good?

What is a mystery is why so many national baseball writers have spent so much time absolving, minimizing or otherwise diminishing the impact of Bauer’s behaviour to position him as some kind of baseball anti-hero. A wunderkind on the mound deserving of unending attention.

I understand how media in the social media age works. I get the need for clicks. But at some point, the writers who have spent years pumping Bauer’s tires need to accept responsibility for both the narrative they’ve spun and the harm it has caused.

Bauer certainly has his defenders outside media as well. His agent is a woman. She is used as a cudgel by those who like to make the ludicrous claim that despite all evidence to the contrary — having a woman agent means he can’t possibly be a misogynist. She has also used her platform to defend him. This doesn’t make Bauer a forward thinking feminist. It makes them both wrong.

Others assert that Bauer is an equal opportunity bully. That he doesn’t necessarily target women, but anyone he believes is being ‘unfair’ to him. That this too proves that he isn’t a misogynist. Even Bauer has made this claim when he’s received pushback. Even if this were true — it’s not any better. Nobody should be subjected to abuse online.

The Jays are already in murky territory when it comes to their claims of building strong team culture. It was this front office that signed Bud Norris, reportedly a known clubhouse bully. They hired Dave Hudgens as their bench coach and staunchly defended him after his role in the Astros sign-stealing scandal was revealed. He remains with the team despite an arguably falsified resume as hitting coach aided by cheating.

Even the Jays’ biggest free agent signing in franchise history doesn’t come without controversy. While many celebrate the George Springer signing, there is a contingent of the fanbase troubled by having one of the Astros players —  who we’ve been told were baseball’s greatest villains — now heralded as the centrepiece of the team. It wasn’t that long ago that a former Jays pitcher, Mike Bolsinger had his career ruined by the Astros’ cheating — and who is still engaged in an active lawsuit against the team.

Why invite more trouble? Not signing Bauer isn’t ‘cancel culture’ run amok. It is not blacklisting him from baseball. Both those things imply an innocent man being punished unfairly.

No — it would merely be a man facing consequences for his actions. Words matter. Accountability matters. Hollow statements made repeatedly when the same behaviour continues matters.

In baseball, one player can’t move the needle that much. And while true that the Jays need  pitching upgrades to be more competitive — there are a plethora of ways to acquire that pitching. There are many paths to success and they don’t start or end with a single baseball player.

So, not only should the Jays not sign Bauer, they shouldn’t even extend him an offer. This would be a more unequivocal repudiation. It would be the Jays front office putting their money where their mouth is. It would be showing the more than half the fanbase who are women, or LBGTQAI+, or BIPOC or Jewish that they matter too.

And it’s also telling the media who cover the Jays that their safety matters.

Even by writing this piece, I know I am opening myself up to be a potential target of abuse from Bauer’s followers. It is a legitimate concern. And it’s not one that any person covering the Jays in any capacity should have to worry about in order to do their job well and without fear of constant online harassment.

There are those who believe in ‘winning at all costs’. But that means that someone has to pay the price. Don’t ask Jays fans to incur that cost.