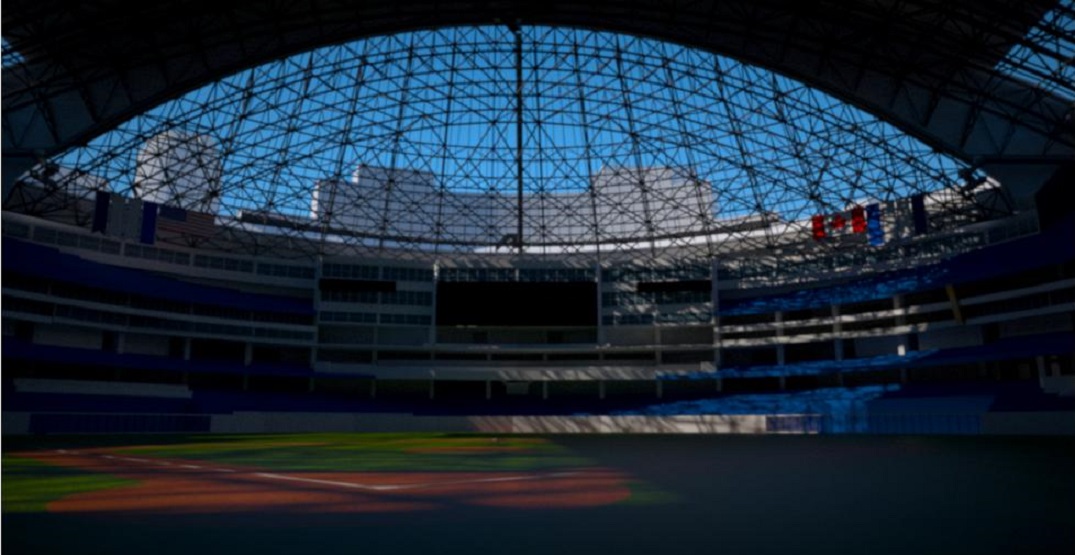 Editor’s note: The Toronto Blue Jays wrote in an email to Daily Hive that team president Mark Shapiro articulated  in his last media availability “that there would be no exterior changes, including the roof, in the Rogers Centre renovation.” A previous version of the story has been corrected that hinted at this possibility.

The newest set of proposed renovations for Rogers Centre used a VR technology by an engineering firm to explore the possibility over varying roof types on the stadium.

First constructed in 1989 as one of the world’s first retractable roofs on a major sports stadium, the stadium formerly known as the SkyDome is now the seventh-oldest ballpark in Major League Baseball.

Reports came out this past winter that the Blue Jays are looking to put between $200 million and $250 million into upgrades to the stadium, but with few details available to this point about exactly what the renovation entailed.

Flagged on Twitter by user @BlueMetropolis, engineering firm Walter P.Moore underwent a VR study encompassing the light overlay across the stadium, which in images posted on its website, appeared to be a translucent roof.

“A renovation project for the roofing on Rogers Centre provides an opportunity to leverage VR to effectively communicate to the client the impact of distinct design options involving ETFE roofing material,” Walter P Moore’s study reads. “Using the date, time of day, and GPS coordinates, we created a dynamic lighting tool that accurately positioned the sun relative to the structure and time of day. This feature enabled the client, owner, and design team to assess the lighting and shadow characteristics of different roofing panel design configurations.”

In other words, the firm created a program testing how the light would shine onto the field and throughout the stadium during the game with Ethylene tetrafluoroethylene (ETFE) roof.

ETFE roofs are in place in many notable stadiums across the world, including Vancouver’s BC Place, Munich’s Allianz Arena, Minneapolis’ US Bank Stadium, Inglewood’s SoFi Stadium, Las Vegas’ Allegiant Stadium, and Miami’s Hard Rock Stadium, to name a few.

The Rogers Centre currently uses a PVC membrane on its exterior.

Walter P. Moore had previously worked on the Rogers Centre projects, including improvements to the roof mechanization systems of the retractable roof that cut the time to open it in half, from 40-45 minutes to just 20 minutes.

Renovations complete or not, the Blue Jays season kicks off this Friday, April 8, when they host the Texas Rangers at the Rogers Centre.