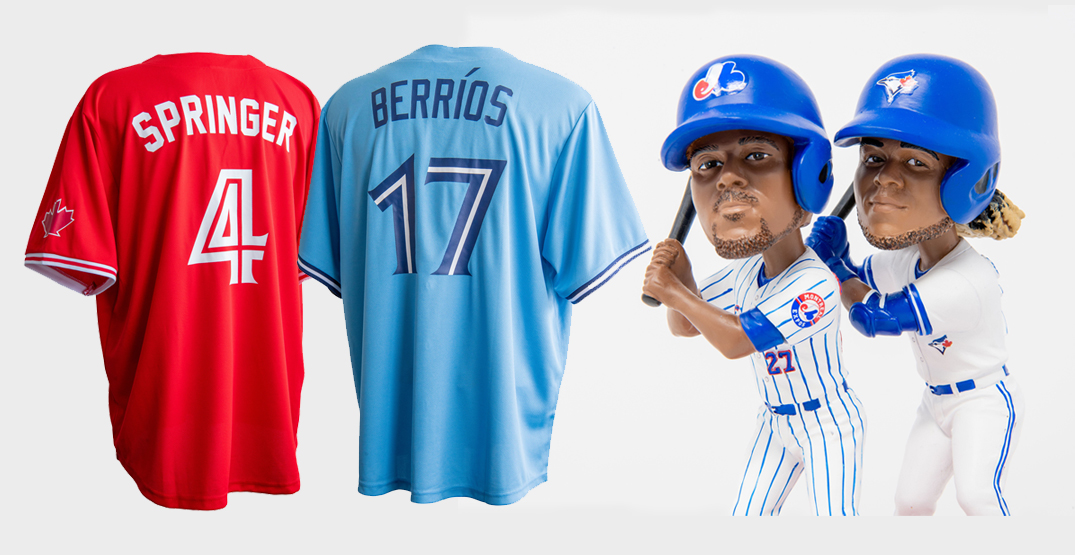 For the first time since 2019, the Toronto Blue Jays will play all their home games this season within the friendly confines of the Rogers Centre.

After bouncing between three stadiums last year in Dunedin, Buffalo, and Toronto, this year will look a lot more like a pre-pandemic season. The start of the 2022 campaign will also come with a few firsts at the ballpark not seen since 2019; no more capacity limits at Rogers Centre and a full slate of giveaways at the ballpark.

Fans who’ve been waiting to snag that precious bobblehead for their collection can pick up some fresh additions this year, plus a bunch of player paraphernalia and some interesting one-off Blue Jays giveaways.

Jessica Wood is the senior manager of promotions with the Toronto Blue Jays, and her team typically starts working on the promotional schedule the summer prior. Last July, the fan experience team started brainstorming and crowdsourcing ideas for the 2022 giveaways.

Then the three-plus month MLB lockout threw a wrench into things, as a few 11th-hour free agent signings and contract extensions for Jose Berrios and Kevin Gausman suddenly changed the landscape for the 2022 roster.

You'll want ALL of these 🔥

The Blue Jays announced the Gausman signing on December 1, and Wood and her team leapt into action to work on a Gausman bobblehead before the lockout began.

“That was definitely one I’m glad we were able to decide before the lockout happened, and then also to be able to confirm with him that he would be keeping his hair long. So that would be accurately depicted in his bobblehead.”

We’ve all seen bobbleheads that look almost nothing like the actual player, but the Blue Jays consult the players to ask a few questions before sending the drafts to the designers. Things like uniform preference, and in the case of Gausman, even hair styles were considered.

Player bobbleheads take about six to seven months from concept to creation, and the Gausman giveaway, long locks and all, happens July 13. The “Victory Vlad” bobblehead features Vladimir Guerrero Jr. in his post-victory dress down attire, with a backwards cap and untucked jersey.

In order to avoid a situation like that, Wood works closely with Blue Jays GM Ross Atkins and the baseball operations size to oversee the giveaway schedule to ensure potential trade chips are gone from the roster before their giveaway comes to fruition.

With the Blue Jays celebrating the 30th anniversary of the 1992 World Series championship, there are a few throwback items on the list; a vintage short sleeve sweatshirt giveaway on June 17, and a retro Blue Jays bomber jacket on August 27.

A jacket fit for a CHAMPION 🏆

Day Six of our Promo & Events Schedule reveal: The 30th Anniversary of our '92 World Series win!

Besides all these new giveaways, the Blue Jays are bringing back mainstays like Jr. Jays Sundays every Sunday home game, and Loonie Dogs Night every Tuesday home game with $1 hot dogs.