The City of Toronto released its highly anticipated Bloor Street West Bike Lane Pilot Project Evaluation, about the project which was first installed in August 2016. The lanes, which are on Bloor Street West between Shaw Street and Avenue Road, were designed to improve commuter safety on a heavily used travel corridor.

“I have reviewed the Bloor St. Bike Lane Pilot report. After much consideration, I will be supporting the main staff recommendation to keep the bike lanes,” said Mayor John Tory after the report was released.

According to the City, this stretch of Bloor street sees about 24,000 vehicles per day, and 3,300 cyclists. The pilot project allowed the city to collect data to evaluate the impact and benefits on cyclists, motorists, curbside demands and parking, and the effect of the lanes on local businesses.

And through data, the City has found that since installing the bike lanes, cycling increased along Bloor street by 49% as of June 2017, 25% of which are new riders, compared to last year’s baseline. That doesn’t count the pilot area specifically, which saw an increase amount to 56% with an average of 5,220 weekday cyclists, making Bloor Street the second highest biking area by volume in the city.

“Even without cycling facilities in place, Bloor Street was one of the most heavily used cycling corridors in the city due to its location and east-west connectivity,” reads the City report. 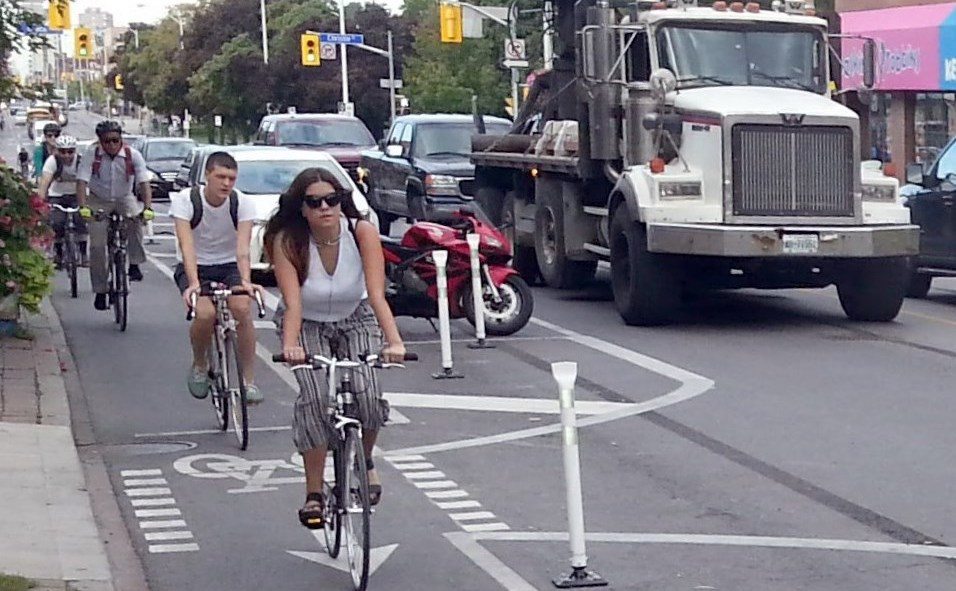 But the bike lanes show preliminary indications that accident rates have reduced. The City said that based on public opinion surveys, the introduction of bike lanes have significantly increased levels of comfort and safety for both motorists and cyclists. Key findings in the report shows that the number of bike/motorized vehicle conflicts decreased by 61%. And while the first Bloor Street evaluation report indicated that driving times increased after the initial instillation, Transportation Services made operational adjustments along the corridor, and this has resulted in that increased time being cut in half.

While studying the cycling installations, the City also partnered with the Bloor Annex Business Improvement Area (BIA) and the Korea Town BIA on the local economic impact of bike lanes on Bloor Street. During the pilot, the City reportedly heard from businesses concerned about impact to their business as a result of the pilot. But according to the report, merchants on Bloor Street reported growth in the number of customers. In fact, the final report said that 90% of visitors arrived on Bloor Street without using a car and among those shopping, car use was lower at 9%. Meanwhile, the percentage of visitors cycling to Bloor Street more than doubled from 7% to 18%.

To conclude the report, the City said that feedback from over 14,000 responses generally showed support for the pilot project. Of 10,200 responses from cyclists who use Bloor Street (including 6,600 who also drive), 92% agree with the project. But of 2,700 respondents who drive and do not bike, 57% disagree, mostly raising frustration with traffic delays and reduced parking convenience.

It’s also noted that should City Council not approve the recommendation to maintain the cycle tracks on Bloor Street West, the estimated cost to remove the project and reinstate the previous roadway configuration would be about $425,000.

This report will be presented at the Public Works and Infrastructure Committee on October 18, then will be considered by City Council on November 7.