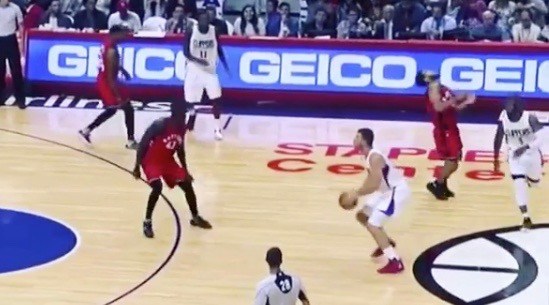 Last night the Toronto Raptors played the LA Clippers at the Staples Center.

And while they lost, 104-98, that is definitely not the story we’re focusing on this morning. ‘Cause when one of your players gets hit in the face with a show during the game, that’s the footprint everyone’s going to want to hear about.

Let’s be clear though, shoes fall off of NBA players’ feet more often than you think. And, as is common protocol, any player who can get their hands on said shoe will toss is off the court as quickly as possible to avoid another player tripping over it.

The problem this time around is that Blake Griffin has been improving his game after a disastrous 2015 campaign that saw him miss more than half the season due to injuries and a suspension for beating up a member (and friend of his) of the Clippers staff.

So ya, Griffin is definitely looking to put last year in the past.

But last night, after Clippers player Jamal Crawford lost his shoe in the 2nd quarter, Griffin decided to be the hero – clearly a role he was not exactly born into.

Picking up the shoe, Griffin has to quickly get rid of it in order to catch a pass from the now shoeless Crawford, and he does so…right into Cory Joseph’s face.

While no foul was called on the play, Joseph was heard to mumble afterwards, ‘That really hurt. I’m going to have a lump there you idiot. Who throws a show? Honestly?’

Obviously he was 1-1 from shoe land.