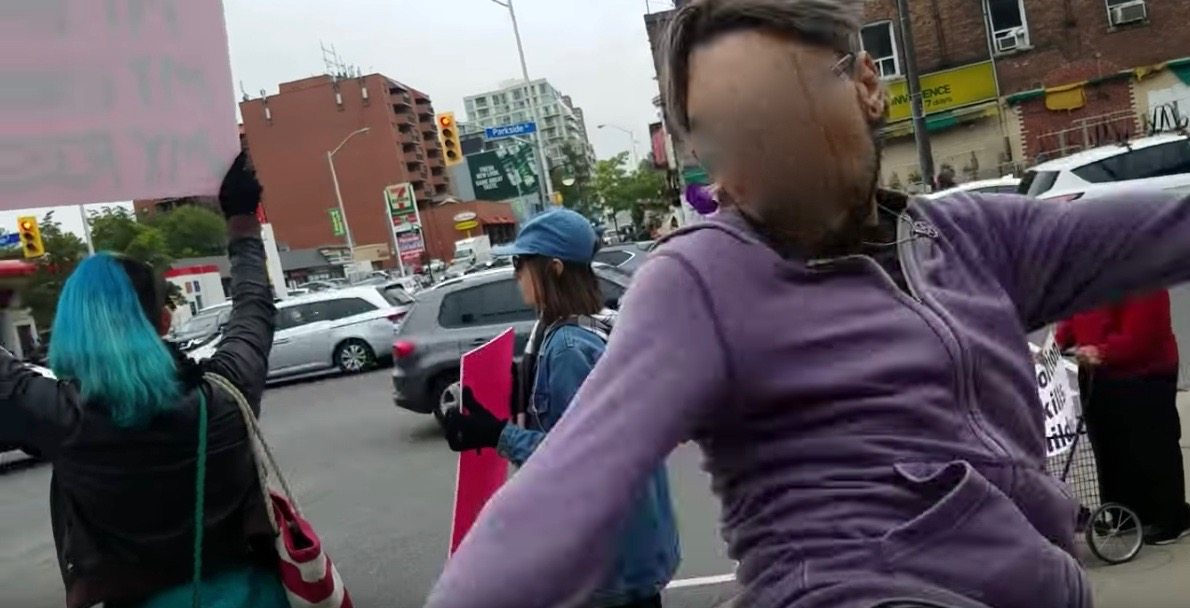 Last year, the Ontario Government passed a bill to protect a woman’s right to choose and access abortion services without fear or harassment.

Under this legislation, abortion clinics in Ontario will have safe access zones of 50 metres, which can be decreased or increased up to 150 metres by regulation.

But the law doesn’t stop pro-life supporters from gathering and making their opinions heard, away from clinics’ safe zones.

And on Sunday, September 30, at the corner of Bloor and Keele, a group of pro-lifers did just that.

According to Life Site’s Marie-Claire Bissonnette, Life Chain is “an annual event which consists of thousands of pro-life women, men and children standing on over 200 street corners across Canada holding signs.”

It’s a “peaceful and silent protest,” and no abortion victim photography is allowed.

Bissonnette says she was assaulted by a man that afternoon.

She alleges that a man took out markers and defaced two of the group’s signs.

“After these acts of vandalism, he approached the pro-abortion demonstrator, evidently in order to seek her approval, which she appeared to deny him by discouraging his tactics,” she said. “At this point I took out my cell phone and began to record him, telling him that what he did was destruction of private property and it was against the law.”

The moments after that were captured on video by Bissonnette, and the 46-second clip has now gone viral.

“He asked me whether a sixteen-year-old girl who gets pregnant after being raped should keep her baby,” she said. “I attempted to explain that her baby should be treated no differently than a three-year-old child who may have been conceived by rape.”

In the video, the man is seen “roundhouse-kicking” Bissonnette, and her phone drops to the ground as she asks for someone to call the police.

According to Bissonnette, police did show up, but did not exit their vehicle.

There have been no reports of the incident through the Toronto Police website, or social media accounts (which generally monitor police calls.)

The legislation protecting clinics prohibits harassing conduct anywhere in Ontario, directed at clinic staff and regulated health professionals who provide abortion services. Further, anyone engaging in prohibited activities within safe access zones would face fines of up to $5,000 and/or imprisonment of up to six months upon their first offence. For second and subsequent offences, fines could range between $1,000 and $10,000 and/or imprisonment of up to 12 months.