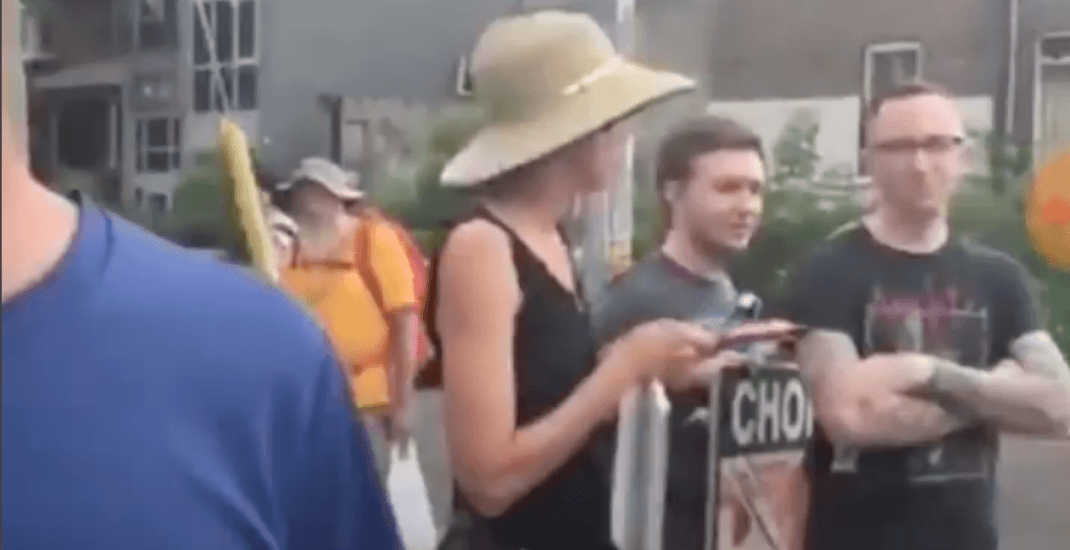 A Toronto restaurateur is being hailed as a hero after confronting anti-abortion demonstrators outside her Bloor West pizzeria earlier this month.

The incident, live streamed to Instagram by Apiecalypse Now! owner Jen Bundock, took place earlier in July but only began to gain traction last week. It has since been viewed more than 800,000 and provoked an outpouring of support from near and far.

After telling the group to move along, Bundock can be heard asking for free condoms, “oh no? You don’t want people to get pregnant but you’re not handing out condoms? Are you funding daycares?” she continues as she directs her camera to a young man in the group.

“How many children have you adopted? Are you supporting women of colour in poor neighbourhoods who can’t afford to raise any children? Are you doing that? School breakfast programs? How much of that have you funded? Do you preach anything but abstinence? Do you support the existing sexual health curriculum at school? No, you don’t… Shame on you. Get the fuck away from my restaurant with this shit.”

“I feel a unique duty to speak up anytime I see something unjust or misguided or see other people do things that could potentially hurt other people,” says Bundock when reached by Daily Hive.

While she acknowledges the right to free speech, Bundock goes on to say that that doesn’t mean others aren’t equally entitled to contest it.

“If they’re going to stand in my space, I’m going to exercise my right.”

While her tirade against the anti-choice group wasn’t scripted, Bundock shares that she’s developed a list of counterpoints in a decade of counter-protesting and activism and she knows exactly where the boundaries are.

“People are litigious,” explains Bundock before expanding on her tactics which include not making personal insults, not touching anyone or their materials, or approaching more than a couple feet.

That’s also her reasoning for live-streaming the encounter. They were also filming with two cameras and she was concerned that if “they knocked [the camera] out of my hand, the only evidence would be the video they produced.”

In the days since the video has gone viral, Bundock has received more than 600 messages and people have come into the vegan pizzeria across from Christie Pits to present her with flowers or caught up with her on the sidewalk to share their gratitude.

When asked if she’d received any negative backlash, she shares that some felt she had valid points but poor manners. To the tone police, Bundock notes that her actions show that you don’t “require that elegant of a response” when dealing with groups like these.

“You don’t need to organize or petition… people can just call them out and they’ll go away.”