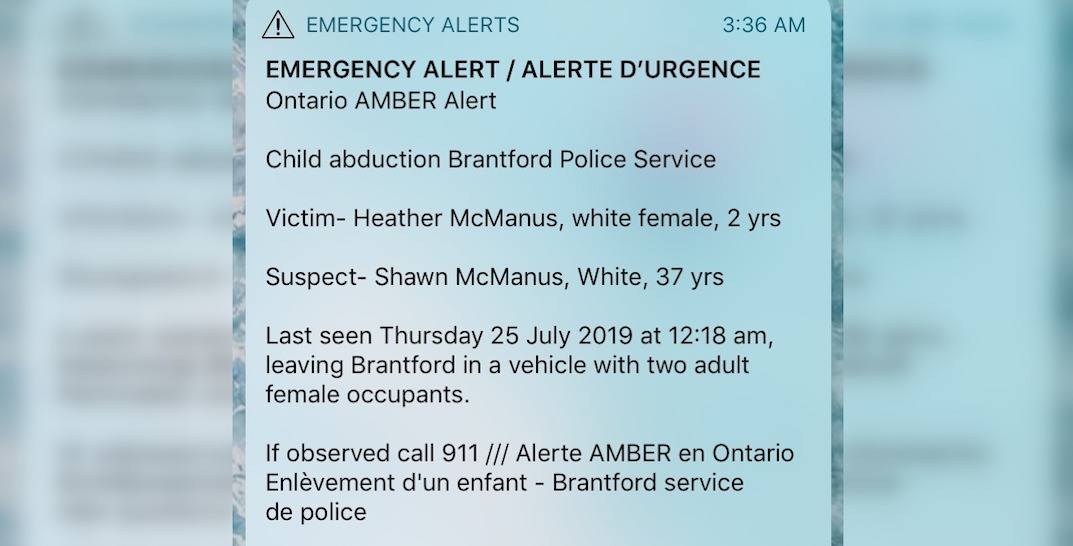 According to Brantford Police Service, the alert was issued just after 3 am in search of two-year-old Heather McManus, who police believed was abducted by her 37-year-old father, Sean McManus.

The initial Alert stated that the victim was with a 37-year-old man, and both were last seen on Thursday, July 25 at 12:18 am leaving Brantford in a vehicle with 2 adult female occupants.

Luckily, police said that the child was located safe just before 4:30 am.

LOCATED – Missing child located. An amber alert was issued earlier this morning regarding a missing 2 year old child. The child has been safely located. The investigation is continuing. pic.twitter.com/ObvsLh1VmB

However, despite the importance of the alerts, people continue to complain about receiving the brief – yet crucially important – disruption.

During the early hours of Thursday morning, numerous Ontario residents took to social media to complain about the alert, which is often the main reason a child is located during an abduction.

“Surviving on only a few hours of sleep thanks to heart attack-inducing 3 a.m. Amber Alert wake up call. Is there a way to disable them?” wrote one user on Twitter.

Surviving on only a few hours sleep thanks to heart attack inducing 3AM amber alert wake up call. Is there a way to disable them?

Another user criticized the entire Amber Alert system and called it “ineffective”, while others simply complained about being disrupted by the loud alert.

The #AmberAlert system in Canada is ineffective. It needs a serious, thoughtful overhaul. There are a lot of flaws in its implementation, and no one should be content with a flawed system being used to track down missing children.

#AmberAlert is it really necessary to break through the Do Not Disturb setting at 3:30am?

This follows the launch of an online petition that’s calling on the Ontario government to fine those who call 911 to complain about receiving the alerts.

The consequence of calling 911 amidst an Amber Alert is life-threatening as legitimate callers with real emergencies are unable to get through.

Started by Dalia Monacelli, the petition has already received 78,000 signatures at the time of publication.

“After the latest Amber Alert I read the umpteenth reminder from the Toronto police operations to ‘not use the 911 line for anything other than emergencies.’ That was when I said enough is enough,” said Monacelli in a statement.

“People have to understand that when they dial 911, they are taking time and personnel away from actual emergencies and that these actions could cost lives.”

Monacelli said that her two-year-old son was the inspiration for her starting the petition, which calls for Premier Doug Ford and Ontario Attorney General Doug Downey to take action.

“I imagined what it would be like if my two-year-old son went missing and we lost an opportunity to get him back because someone was complaining about the alert. I knew I needed to try to put an end to this selfish and dangerous behaviour.”

You can take action and sign the petition here.