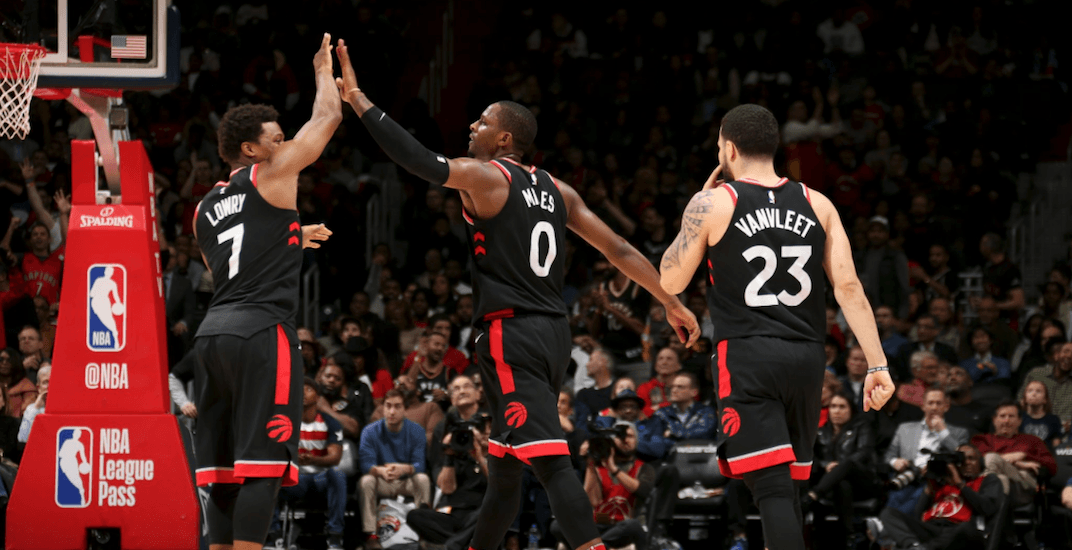 What a time to be a Raptors fan.

After Wednesday night’s overtime victory over the Detroit Pistons, the Toronto Raptors became the first team in the league this season to clinch a spot in the playoffs.

Sitting first in the East with a record of 47-17, the Raptors are in position to make a deep playoff run. It’s imperative they finish first in the Eastern Conference, with the likelihood that both Boston and Cleveland will finish second and third, respectively.

Avoiding a second-round matchup with either Boston or Cleveland will go a long way to helping Toronto reach its first-ever NBA Finals.

In their current spot, according to a forecast on fivethirtyeight.com, the Raptors have the second best chance at making the NBA Finals.

Finishing first in the East means home court advantage throughout the first three rounds, something that is of huge importance for the league’s best home team (27-5).

Outside of the Celtics, who are 2.5 games back of the Raptors for the first seed, the playoff spots from 3-8 are only separated by 4.5 games.

Here are the three most likely first round opponents for the Raptors, if they hold onto first in the East:

The Bucks have 17 games remaining on their schedule, seven of them against playoff teams, and only six at home.

With a tougher schedule down the stretch, a young, inexperienced roster, and coaching/roster turnover that occurred during the season, a rematch of last year’s first-round is a strong possibility.

The Raptors won the season series, 2-1, including a game in which DeMar DeRozan dropped a franchise-high 52 points on New Year’s Day.

Of the three possible first-round matchups, the Bucks are the least threatening, despite having an MVP candidate in Giannis Antetokounmpo.

The Bucks are young, lack depth, and are average on both ends of the floor. They are 12th in offensive rating, and 15th in the league defensively.

The 76ers are the biggest unknown of the three possible first-round matchups for the Raptors.

The 76ers, when fully healthy, are one of the best stories in the league.

Led by their two young stars, Joel Embiid and Ben Simmons, and a deep roster of young talent and veterans, the 76ers could be the biggest scare of this year’s playoffs.

While the top talent hasn’t been proven in the playoffs, the 76ers are well-coached, and play a scrappy-style of basketball—a pace that the Raptors always struggle against.

After falling from third to seventh, the Miami Heat have become a possible first round match-up.

The Heat are currently tied with the Bucks for the seventh spot, but hold the tie-breaker.

They would be a scary matchup.

Despite having one of the best big men in the league in Hassan Whiteside, and first-time All-Star, Goran Dragic, the Heat aren’t best known for their talent.

It’s their style of play—as one of the scrappiest teams in the league, the Heat have been able to win games even in the ugliest of fashion. They are 22nd in the league offensively, but are eighh in defensive efficiency.

Miami can go small, they can play big, and are 9-10 deep. They have a solid balance of young talent and proven experience, especially after bringing Dwyane Wade back to South Florida during the buyout period.

They have a plethora of athletic defenders that will be able to keep up with the Raptors’ All-Star backcourt, and a number of bigs that can protect the interior, and slide out to the perimeter.

For the Raptors to have success in this potential playoff matchup, solid defence and ball movement for 48 minutes is an absolute must. If the Raptors succumb to playing at slow, low-assist pace, this will be a very challenging series.

The season series is tied 1-1, with one more game between the two teams still to come.