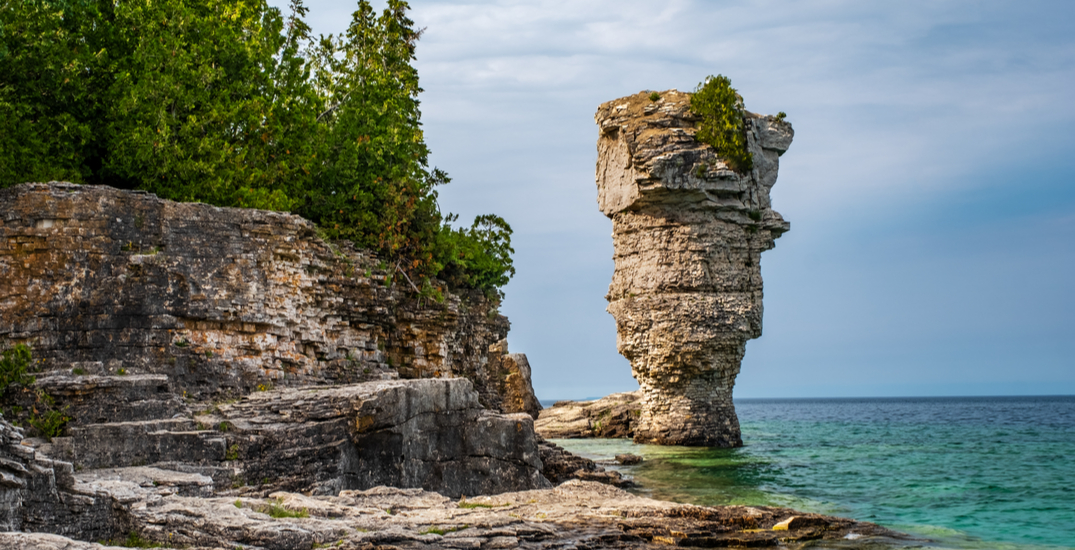 With the new staycation tax credit in effect, what better time to explore Ontario? The province is really yours to discover.

From north to south there are tons to see in Ontario! Home to 340 provincial parks and all five Great Lakes, there’s a lot of Canadian wilderness to explore.

We’ve compiled a list of some of our favourite natural wonders in Ontario so you can start planning your summer road trips and take advantage of that tax credit!

Spoiler alert: We did not include Niagara Falls on this list, she gets enough attention as it is.

The Sleeping Giant is a popular natural wonder in Ontario’s Thunder Bay area. The rock formation can be seen from all over the city and it looks like a giant person lying on their back with their arms folded across their chest.

The giant itself is a provincial park and you can walk all over it via the Top of the Giant Trail. Once you reach the top you’ll have great views of Lake Superior. The park’s boreal forest is called home by a ton of local wildlife including deer, lynx, wolves, and hundreds of bird species!

Flowerpot Island is a few hours from Toronto, just hop on the ferry at Tobermory and you’re well on your way!

Most people hike to the flower pots and then visit the historic light station. There aren’t any sand beaches on the island, though. It’s a bit rocky, and the water is cold, but if you’re up for a swim, jump in!

You don’t want to miss out on the gorgeous sand dunes at Sandbanks Provincial Park! According to Ontario Parks, Sandbanks is the largest baymouth barrier dune foundation in the world.

Sandy beaches, galore! Sandbanks is home to three beautiful beaches, but be careful, Dune Beach has a sudden drop-off in the lake. Be aware of the where the buoys are and don’t stray too far!

In our very own backyard, the Scarborough Bluffs are a stunning natural feature. Stretching 15 km along the Lake Ontario shore, they really are something to behold. From mineral deposits over 12,000 years ago, carved out by wind and water erosion, it’s a gorgeous piece of Toronto’s landscape.

Be careful and avoid climbing on them as erosion makes them dangerous! As Torontonians know, a number of people have to be rescued from the face of the bluffs every year.

A post shared by Zenning with Zay Photography (@zenningwithzay)

This natural cave system is now maintained and operated by a family in Eganville. Tours of the caves will reopen over the May long weekend, so start planning!

Make sure you bring a sweater, even on hot summer days these caves remain cool! The caves are not accessible, so if you’re using mobility aids or a stroller, you might want to skip this adventure.

This spot is well protected from light pollution, so grab your telescope and camera and hit the Canadian Shield bedrock to get a gorgeous view of the cosmos.

Ouimet Canyon is only open from May long weekend to mid-October, so book your trip accordingly, but you won’t want to miss these views. Snap incredibly Instagrammable pictures from either of the two lookouts.

These caves are privately owned and begin operating in May. Located in the Bruce Peninsula, take a self-guided tour of the caves, but make sure you bring proper footwear.

These caves aren’t for the faint of heart. The website warns that those with bad hearts, lungs, knees, or backs should avoid this adventure. There are steep slopes and slippery rocks, but the views are sure to be worth it!

Located just over an hour outside of Toronto, this natural wonder is just waiting for you! You can’t walk on the badlands, but you can take in the stunning views!

The badlands were formed on an ancient seabed some 450 million years ago. Make sure to take a walk along the boardwalk to get the best views.