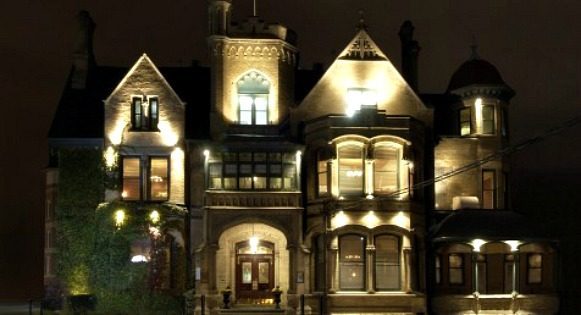 Whether you believe in ghosts or not, Toronto has some old buildings with decidedly creepy vibes not for the faint of heart.

If you want to get in the mood for Halloween, and maybe interact with some spirits along the way, here are some of Toronto’s spookiest and (allegedly) haunted buildings. Grab that ouija board and whatever ghost hunting tools you’ve got on hand to make the most of Toronto’s spooky season.

This may be one of the more obvious, or well-known, haunted buildings in Toronto. Originally built in 1867 for the McMaster family, and was later purchased by the Massey family.

The house is said to be haunted by a young boy who can be seen playing on the stairs where he allegedly died. The ghost of a woman has also been reportedly sighted at the Keg Mansion, she is said to be the ghost of a maid in the house who died by suicide after Lillian Massey’s death. It is believed that she haunts the second floor women’s washroom and rumours have it that a cook came into the restaurant early to see the image of a woman hanging from where she had allegedly hung herself in 1915.

Fairmont appears to have a thing for reportedly haunted properties, Château Laurier in Ottawa, the Empress in Victoria and Toronto’s Royal York are all apparently properties with paranormal activity.

There are lots of ghostly sightings coming out of this hotel, including the sounds of children running up and down hallways only they are no where to be found when guests open their doors. The eighth floor is said to be haunted by a man who may or may not wear a purple jacket, people have even reported hearing music and laughter coming from closed ballrooms in the hotel.

And if ghosts aren’t your thing, stay the night and take a trip to the 13th floor. While all buildings technically have a 13th floor, most of them have skipped the number entirely, but not Royal York. Last time I visited the 13th floor in this building, the elevator got stuck. A sign from spooky spirits?

Many ghost stories come about as a result of an unsolved mystery, and the haunting of Gibralter Point Lighthouse is no exception. There are two stories about the ghost that may or may not be haunting the lighthouse, and both surround the disappearance of lighthouse keeper John Paul Radelmüller in 1815.

Legend has it that Radelmüller’s ghost haunts the lighthouse, but how he died remains up in the air, according to the Toronto Public Library. One belief is that he simply disappeared. Another is that his friends came to visit him, got drunk and beat Radelmüller to death when he refused them more alcohol. Allegedy, a different lighthouse keeper found skeletal remains buried near the lighthouse in 1893, but that’s never been confirmed.

There are even theories about why the ghost of Radelmüller might be haunting the lighthouse. Maybe he’s searching for his missing bones, or perhaps he’s just a dedicated lighthouse keeper, keeping the light for more than 200 years.

The jail, which closed in 2013, is said to be haunted by the spirits of the many people who were put to death in the facility. Having opening in the 1860s, it was uncommon for people to be hanged for their crimes.

According to TorontoGhosts.org, one of the ghosts liked to take a swing at the communal punching bag that once hung. Prisoners complained repeatedly about someone hitting the bag and keeping them up at night. Guards claim to have seen the bag swinging after checking all the cells were locked and prisoners were accounted for.

Located right below TTC’s Bay Station is an abandoned subway platform that was shutdown after just six months of use. Public transit enthusiasts love to scratch their heads over Lower Bay Station, and so do ghost hunters. There was at one point even a twitter account for the Lower Bay Station ghost.

Abandoned places typically make for a good place for ghost stories to crop up because they’re already boasting pretty creepy vibes. According to TorontoGhosts.org there’s a ghost in the tunnels of this abandoned subway station. The spirit is apparently a woman and has reportedly been seen by TTC workers and film crews who use the station.

Not only does Casa Loma turn into a haunted house for Halloween, it allegedly is straight up haunted. The house was built in the early 1900s, and as the story goes, the tunnels leading from the house to the stables are home to a ghost.

One commenter on TorontoGhosts.org said that they heard hooves and horse-related equipment when they were in the tunnel, despite the tunnel being otherwise empty. Some paranormal investigators and innocent folks just touring the castle, describe getting a “creepy” feeling in the tunnels. You know that they say: if the vibes are bad, it’s probably a ghost!

According to avid Toronto ghost hunters, a woman in an old-fashioned dress sometimes appears near the vault. The woman’s name is allegedly Dorothea and rumour has it that she took her own life after a love affair gone wrong.

Hunters also say there may be some poltergeist activity in the building, like lights turning off and on and doors opening and closing. Some reports suggest there are cold spots throughout the building that are chalked up to being ghosts.

OK, this one is more legend than anything, but as the old legend goes, a horseman has been known to ride out of Grenadier Pond and around the west end neighbourhood. According to a 1903 article published in the Toronto Daily Star, the phantom rider arose from the mists that sit atop the pond and took off at a gallop, running down pedestrians. This ghost apparently even ran down some police officers.

Maybe that’s a bit hokey, and no phantom riders have been seen in present day, but people do believe Grenadier Pond is indeed haunted, but the story is still a bit of a build-your-own-adventure as details vary widely depending on who you hear it from.

Ultimately, it is believed that some people drowned in the pond hundreds of years ago, and the ghosts of the drowning victims haunt the pond from beneath the surface. Water ghosts, no where is safe!

Of all the places to haunt, a museum seems the most obvious. They’re full of old stuff and some of it can be a bit creepy-looking. Allegedly, a ghost or two have taken up residence in the ROM among the artefacts.

One of the alleged ghosts that has reportedly been seen at the museum is that of Charles Trick Currelly, the first director of the ROM. He apparently appears in a nightshirt in the East Asiatic collections.

There was once reports of a little girl named Celeste who haunted the planetarium, but it has since closed and her apparition hasn’t been seen since. One former student who worked at the ROM claims a ghost touched their shoulder one day. Either way, visiting the ROM is never a bad time, maybe you won’t contact any spirits but you can look at some dinosaur skeletons.

Along with the old-timey vibes of the Distillery District comes a lot of history, and allegedly some ghosts. One ghost is apparently that of James Worts Sr. who threw himself down a well after his wife died giving birth. He has reportedly appeared strolling around the grounds of Gooderham & Worts before disappearing through a wall.

There have also been reports of lights turning off and on, doors opening and closing and even unexplained banging. This place is apparently haunted enough that there are haunted walks and ghost tours through the district.

Other workers in the Distillery District have reported odd things like chandeliers shaking for no apparent reason, a novelty wine bottle falling off of a shelf, and the sounds of chairs being dragged across the floor when no one is around to be dragging chairs.