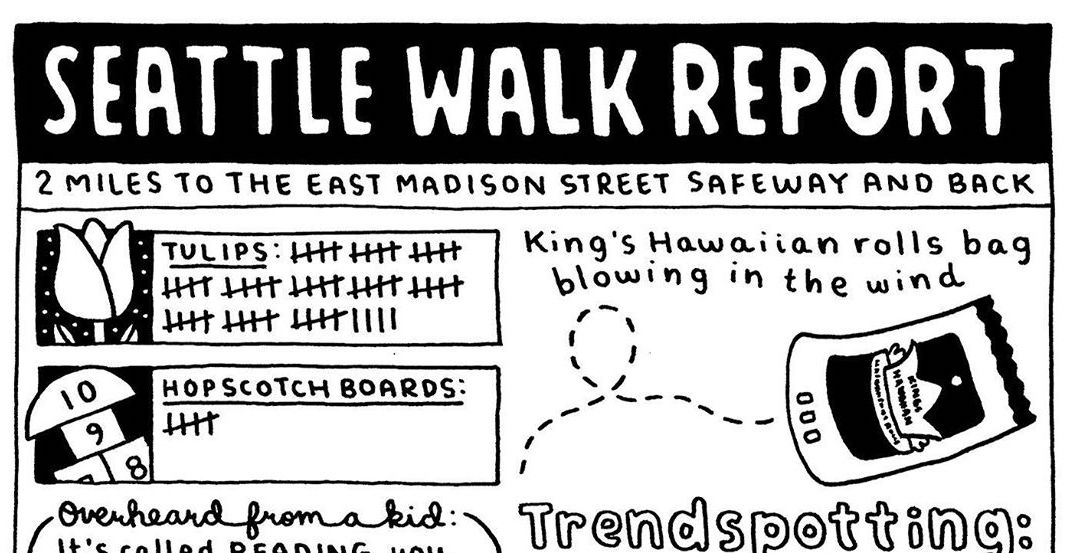 Since July of 2017, Seattleite Susanna Ryan has been sharing what she sees on her city walks through cartoon “walk reports” on her Instagram page, Seattle Walk Report.

Although the latest global pandemic may be limiting her social interactions, she’s still finding time to enjoy the outdoors and step out for physically distanced walks.

Ryan typically posts her walk reports twice a month and garners nearly 2,000 likes for each illustration.

Ryan also noted some trash that was littered, including a King’s Hawaiian rolls bag, multiple squished takeout containers, and face masks on the sidewalk.

One animation posted earlier this month displayed a report of a captivating scene of a squirrel eating an entire corncob outside of Ryan’s window.

When scrolling her Instagram page, you’ll also see silly sinkhole reports, other Seattle news, and things that brought her joy in the week.

Susanna Ryan is no stranger to penning Seattle streets to paper — she’s even written the book Seattle Walk Report: An Illustrated Walking Tour through 23 Seattle Neighborhoods, which displays 23 of Seattle’s neighborhoods through a comical lens.

In the introduction to her book, she writes, “On a whim, I left my apartment in the early morning and started walking without a destination in mind. Almost like magic, Seattle began revealing itself to me in ways I had never taken the time to see before.”

It’s through these walks that she’s able to see the city in a different way: the way that she portrays it in her comics.

Ryan’s illustrations can be found online at instagram.com/seattlewalkreport.

Daily Hive has reached out to Susanna Ryan for comment and will update the article accordingly.