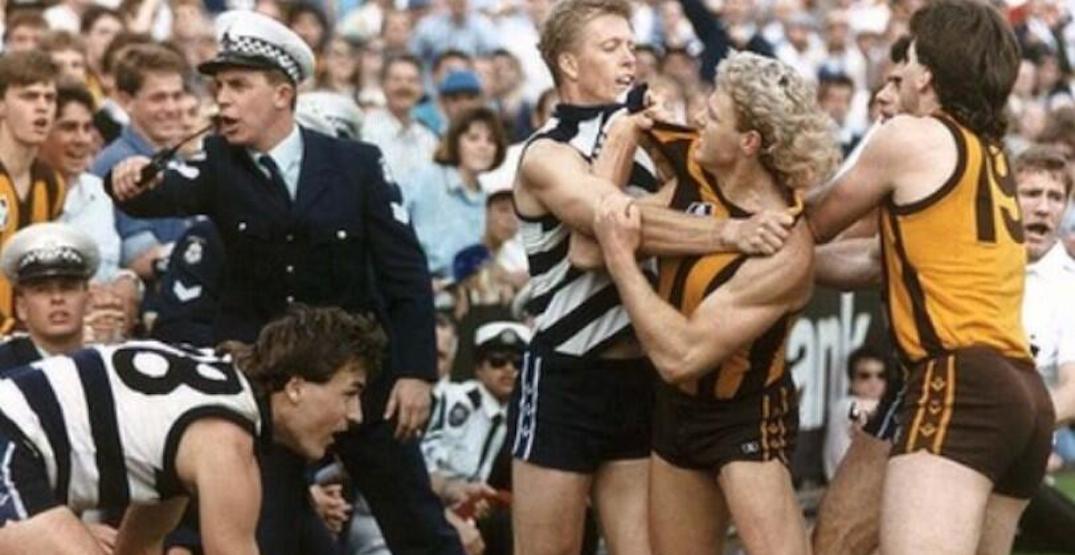 Craving the pleasure that comes from watching live sports? Us too. More than we’d care to admit in polite company.

It turns out that it’s not about missing the teams we root for. It’s not even about the satisfaction of seeing masters of their craft perform what should theoretically be aesthetically pleasing athletic feats.

It’s about the enjoyment of the unexpected.

There are countless great TV shows and movies waiting for us at the press of a button. But even the most thrilling dramas can’t deliver the will they/won’t they buzz that a great game provides. For the sports junkies among us, it’s the fix that even beautiful documentaries can’t satisfy.

How can we curb our cravings? What are we looking for as we scan the internet jonesing for a sports fix? These are our criteria.

1. In the majority of cases, the viewer, either through his or her encyclopedic knowledge of sport or because the doofus posting the video has titled it “Last Minute Comeback” or “Historic Upset,” already knows the result. This does not scratch the itch. We need the end result to be in question. That’s the whole reason we’re watching the game to begin with.

2. We need some kind of drama. It needn’t be a last moment miracle (see Point 1) but watching a blowout is tedious at the best of times. Even under lockdown conditions, there must be a better way to spend our lives than watching players from the past pad their stats.

3. It has to be a significant moment. Regular season Blue Jays games from the recent past do not need revisiting. To win our attention an event has to be a major occasion in the participants’ lives. We want to see competitors giving the proverbial 110%. We want screaming fans. We want to see the winners breaking down in tears. We need the emotion.

Now we’ve pinpointed what we’re searching for, brace yourself as you begin a new phase in your sporting exploration. Click to full screen the moment the video begins and, if you want to be sure to avoid spoilers, never read the comments.

The NFL gets plenty of deserved criticism for the way it continues to conduct its lucrative business, but credit where it’s due. They’ve posted plenty of classic games, modern and vintage, from the league’s rich history on their YouTube channel and although they’ve given the game (and the result) away with few foolishly chosen captions, you’d have to be a devout NFL worshiper to remember how all of these games finished.

They’ve done us a solid by editing out the hours of commercials too. Well played, Goodell.

There’ll be no Olympics this summer, but you can revisit plenty of past glories on the Games’ YouTube channel, where they’re sportingly uploaded a bunch of finals from Rio and beyond.

Even if you spent the summer of 2016 glued to your TV you didn’t have enough eyes to watch all the events, which means you’re bound to experience someone’s golden moment for the first time.

What makes darts unique among the pubic arts (you know, pastimes that would traditionally be enjoyed in the pub) is that, when you think about it, you don’t actually need to be in the same room as your opponent.

Kudos to the folks at the Professional Darts Corporation (PDC), who hastily arranged the Unibet Home Tour, allowing the world’s best tungsten tossers to continue competing under lockdown via wifi, while simultaneously feeding Britain’s insatiable passion for gambling. You can register to follow the action from for free here.

Alternately, if you prefer your darts to be accompanied by the roar of boozed-up Brits, you can revisit the entire 2013 Adrian Lewis v Phil Taylor classic, the Thrilla in Manila of darts matches, here:

There’s only one word for that: magic darts!

Pure sports aficionados love the intrigue and intricacies of the three-week soap opera that is the Tour de France, but on the whole, the nature of this annual race of attrition and the intrinsic conservatism of top contenders’ tactics means that stage replays make poor choices for digital revisiting for anyone but insomniacs and pro cycling fanboys.

But the Tour de France isn’t the only bike race out there. Pro cycling’s famous One Day Classics feature all the stars of Le Tour, without all the dull days and ultra-cautious strategies that accompany a multi-stage race. With no tomorrows to worry about, they’re winner take all, with plenty of thrills and spills en route.

You can find plenty of these races online, including the brutal Paris-Roubaix over the cobbled roads of northern France and the lengthy but always fiercely contested UCI World Championship Road Races.

Only those with plenty of time on their hands should even attempt to watch any bike race from beginning to end. The last hour is when things get interesting anyway.

Massive respect to World Rugby, who are filling their YouTube channel with full matches from both Men’s and Women’s World Cups from years past. They’re all fiercely contested matches at the sport’s highest level, but if you’ve not seen France and New Zealand knocking the crap out of each other back in 2007, there’s no better place to start.

With ESPN seemingly committed to making a feature length documentary about every NBA and NCAA team to ever lace up sneakers, you have to look further afield to find high quality hoops that aren’t already part of sports iconography.

Praise the Sports Gods for FIBA. Although are plenty of familiar faces of future NBA stars among the American team facing the Soviet Union in the 1986 FIBA World Championship Final, it’s the battle between the young and huge David Robinson and the young and even huger Arvydas Sabonis that really catches the eye.

The commentary is in Spanish, but what’s really weird is not having the score and game clock permanently on screen. How could people live like this?

I’ll be first to admit to knowing close to nothing about Australian Rules Football. What I do know is that the Aussies love it, the crowds are enormous and anyone can figure out the basic rules in about three minutes. This is the 1989 Grand Final, Australia’s Super Bowl, featuring streakers, some fantastic mullets, and some of the most frantic commentary you’ll hear anywhere in the English-speaking world.

It seems inconceivable today that professional athletes once risked both injury and public humiliation by competing in sports other than their own. But this was the concept behind Superstars, a long-running TV show that repeatedly saw some of the world’s most celebrated sportspeople prove their lack of versatility against less famous opposition. Hokey in the extreme but still fascinating, it beggars belief that NFL teams would let their prize assets sprint it out while racing shoulder to shoulder on wobbly bikes.

There’s an entire universe of Superstars to revisit online but there’s no highlight more inspiring than the immortal Smokin’ Joe Frazier thrashing his way across an Olympic pool, having neglected to tell anyone in the production team that he couldn’t actually swim.

So there you have it. Hopefully, this list will be a starting point to help you replenish your sportless soul. And if that’s still not enough for you, we’ll leave you with this magical nugget of sporting miscellanea; Barcelona and Tottenham legend Gary Lineker revisiting the night he pooped his pants in front of a global audience during a crucial match at the 1990 World Cup.