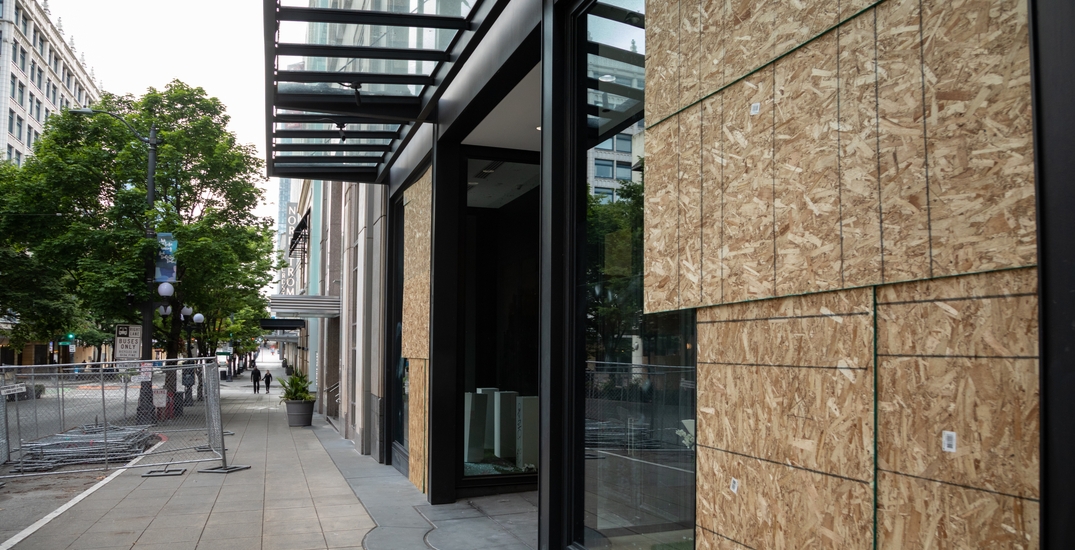 Downtown Seattle is looking like it did a few months ago as several businesses and residences are currently boarding up in anticipation of unrest following tonight’s presidential election.

Work crews have been spotted in several neighborhoods over the past two days, securing windows with plywood and riot glass shields.

Twitter user bonnevivante shared a note from her Downtown Seattle apartment building, which stated that the boards they’d placed on their lower level are in direct relation to any possible post-election disruptions.

Here’s what our boarded-up city is currently looking like:

Downtown Seattle all boarded up pic.twitter.com/fgCCQYmS0J

Everyone has anxiety about the uncertainty of this week’s election. I saw several businesses boarding back up today in downtown Seattle. SPD limited time off and has been doing tabletop exercises with the State and Feds in anticipation of large protests this week. pic.twitter.com/YuVQKRqkj8

My sister just shared these pictures of downtown Seattle. The night before the election. Scary times we are living in. This is the result of a failed presidency. Four years of misery and hatred. pic.twitter.com/UaVNGi7PTk

While most storefronts in downtown #Seattle have been boarded over throughout the summer, a few additional storefronts are being covered in anticipation of election night. In general, many people appear to be having a normal night, eating out/shopping etc #2020Election pic.twitter.com/diTLhseQrm

Hey tourists sure the Market is open but Downtown Seattle continues to board up. pic.twitter.com/WKOdc1sv6G