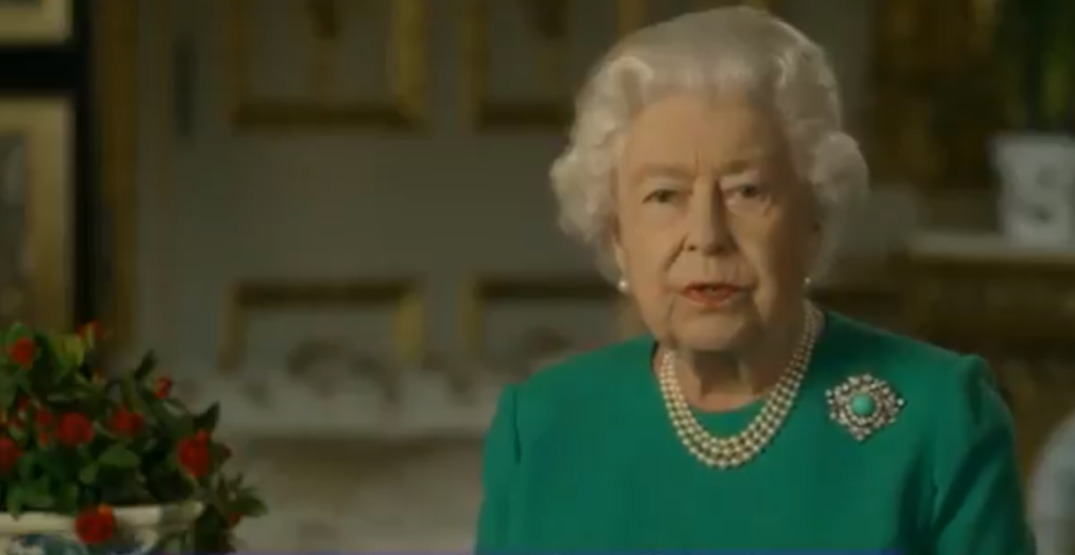 Still taken from the Queen's address (The Royal Family/Twitter)

Queen Elizabeth II publicly addressed the United Kingdom and the Commonwealth nations for just the fourth time in her 66-year reign.

The pre-recorded televised broadcast from Windsor Castle showed the Queen discussing the enormous impact the COVID-19 pandemic has had not only in the UK but across the world.

She describes it as a “time of disruption that has brought grief to some, financial difficulties to many, and enormous changes to the daily lives of us all.”

However, her message was not one of despair but rather unity, and praise for the strength and perseverance of the British people.

“I hope in years to come, everyone will be able to take pride in how they responded to this challenge,” the Queen stated.

“And those who come after us will say that the Britons of this generation were as strong as any. That the attributes of self-discipline, of quiet good-humored resolve and of fellow-feeling still characterize this country.”

Her Majesty The Queen addresses the UK and the Commonwealth in a special broadcast recorded at Windsor Castle. pic.twitter.com/HjO1uiV1Tm

The Queen also expressed her sincerest gratitude to those working in the National Health Service (NHS) on the frontline as well as care-workers and others selflessly performing essential services in support of the country.

She also expressed appreciation for those practicing social and physical distancing by staying home as well as those coming together to help their communities by delivering food and parcels, checking in on neighbors, and participating in joint applause for healthcare professionals.

“I also want to thank those of you that are staying at home, thereby helping to protect the vulnerable and sparing families the pain already felt by those who have lost loved ones,” she explained.

The Queen continued that this time of self-isolation provides an opportunity to slow down and reflect in moments of prayer or meditation.

She also drew a comparison between today’s address and one she made decades ago in 1940.

In that address, Queen Elizabeth II — who was only 14 at the time — and her sister, Margaret, explained to children why they were being evacuated from their homes and separated from loved ones.

The Queen describes how she understands the painful sense of being separated from those you love, stating, “we know deep down that it is the right thing to do.”

The Royal Family has personally felt the impact of the coronavirus pandemic through Prince Charles testing positive in March.

The Queen’s address concludes with her describing how now more than ever is a time that all nations around the world are coming together for one “common endeavor.”

“We will succeed, and that success will belong to all of us,” she stated.