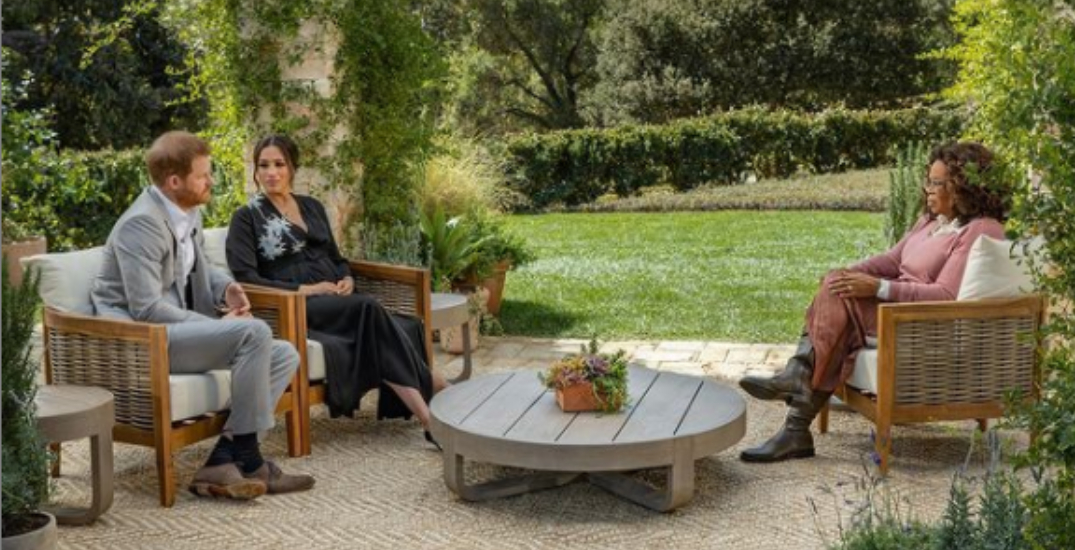 Oprah Winfrey has shared some never-before-seen clips from her sensational interview with Prince Harry and Meghan Markle.

Oprah joined CBS This Morning on Monday, revealing new details that were brought to light in the trio’s three-hour conversation, but didn’t make it into the 85-minute special.

One of the biggest bombshells dropped in last night’s interview was that there had been “concerns and conversations” over how dark the skin of their son, Archie, would be.

While Harry would not say which member of the Royal Family had made the remarks to him, Oprah said he disclosed to her off-camera that it had not been either of his grandparents – The Queen and Prince Philip.

In an unaired clip, Harry says that racism was “a large part” of why the pair left the UK.

“The UK press is bigoted, specifically the tabloids,” he says. “If the source of info is inherently corrupt, or racist, or biased, then that filters out to the rest of society.”

Harry says that the control the British press holds over the Royal Family, and the fear they bestow in them created a “toxic environment.”

While Harry says his father, Prince Charles, has “made peace” with it, he and Markle were unable to do the same because of the added factors that race and social media played.

“Kate was called Waity Katie, waiting to marry William. While I imagine that was really hard, and I do, I can’t picture what that felt like.” Markle says.

“This is not the same. And if a member of his family will comfortably say ‘we’ve all had to deal with things that are rude,’ rude and racist are not the same.”

“Kate was called Waity Katie, waiting to marry William, while I imagine that was really hard & I do… this is not the same & if a member of his family will comfortably say we’ve all had to deal with things that are rude. Rude & racist are not the same.” —Meghan #OprahMeghanHarry pic.twitter.com/2QWtDh24ef

Another factor in the couple’s departure from the UK was a perceived lack of support from the Royal Family.

Harry reveals to Oprah in one clip that while his family is aware of their reasons for moving to North America, none of them have apologized.

“The feeling is that this was our decision,” he said. “And therefore, the consequences are on us.”

Around the time they announced their departure from senior royal duties, The Queen invited him and Markle to have dinner with her, Harry tells Oprah.

However, once the day arrived, Her Majesty’s plans abruptly changed, and she was suddenly “busy all week.”

In a clip with Markle and Oprah solo, the former duchess sheds light on the relationship she has with members of her own family.

Markle reveals that when she asked her father if he had been working with the press to stage photos, he lied to her, and said that he wasn’t.

She told him that the institution could try to intervene on their behalf and have the story killed. Doing so, though, meant that one day she and Harry may not be able to protect their children.

Only then did he tell her the truth.

“‘I just need you to tell me. And if you tell me the truth, we can help.’ And he wasn’t able to do that.” — Meghan, Duchess of Sussex, on a conversation she had with her father regarding tabloids #OprahMeghanHarry pic.twitter.com/XhPwGM0Uvl

“I look at Archie, I think about this child, and I genuinely can’t imagine doing anything to intentionally cause pain to my child,” she says.

When asked about her older half-sister, Samantha, and the supposed tell-all book she’s written, Markle tells Oprah that she hasn’t seen the woman in nearly two decades.

She says Samantha changed her last name back to ‘Markle’ when she began dating Harry.

“I think it would be very hard to ‘tell all’ when you don’t know me,” Markle says. “I grew up as an only child.”