Available for pre-order on Wednesday, Microsoft’s Surface division has revealed the next generation of devices in their lineup.

With one of the most diverse and intriguing technological lineups of the modern age, Microsoft’s Surface team has been cooking up some extraordinary products since they began trying to take Apple at their own game almost a decade ago.

Originally launched in 2012, the Surface tablet has bred a slew of options from the Seattle-based tech company. Now, with desktops, laptops, two-in-one tablets, and more, there’s a Surface product for almost anyone.

In a brief update Wednesday morning, Microsoft unveiled the iterations on some of its Surface devices, including the highly anticipated Surface Earbuds.

The purse-sized version of the Surface tablet didn’t quite take off as much as other products in this lineup did, but a handful of minor tweaks in the second generation will boost its potential.

For the most part, the guts of the Surface Go 2 is the same as the first iteration. However, thanks to a better network card, and optional 8th Gen Intel M3 processor, the Go 2 is faster and lasts just a bit longer at full charge.

A major gripe with the Go 1 was the screen bezel. Microsoft has been making stunning displays for years, but the bezel on the edge of the Go 1 screen was notably obtrusive. Now, with the same physical dimensions as the first, Microsoft has shrunken the bezel and fit a 10.5″ display within that space.

Microsoft’s true transforming laptop-and-tablet combo was divisive at first but has since gained popularity as one of the best “lap-able” tablet computers on the market.

With its high-priority processing and a full keyboard while attached and one of the most powerful and gorgeous tablets while detached, the Surface Book serves as a middle ground.

In its third generation, the Surface Book packs even more punch, thanks to a possible ceiling of 32 GBs of RAM, 10th Generation Intel processors, and an option to include the cream of the crop NVidia GeForce GTX 1660 graphics cards.

The Surface Book 3 features the same stunning screen as the previous iteration, with the signature silver magnesium frame around the majority of the device.

Coming off of a strong outing with the first-ever Surface Headphones, the second generation of studio-quality over-ear headphones from the Surface team raises the bar in many ways. 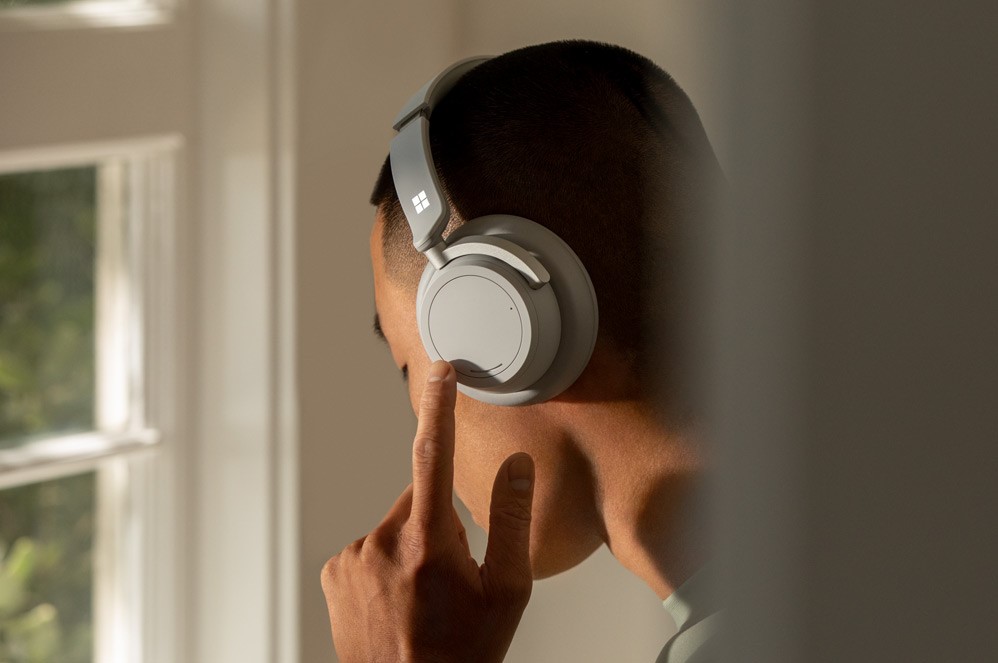 With full touch/gesture controls, the Surface Headphones 2 aims to please the everyday wearer and the audiophile. Easily one of the most comfortable headsets you can buy, the second-generation Surface Headphones bring 13 levels of noise cancellation and ambient seclusion to the table, alongside a massive 20-hour battery life.

Most notably, however, is that they finally come in a matte black option.

The price for the new Surface Headphones 2 is set at $249.

The time has finally come for Microsoft to take on what has inarguably been Apple’s greatest product in the past 10 years: the AirPods. The wild success and desire for AirPods shifted Microsoft’s headphone team to develop a Surface Earbuds product that performs, adapts, and brings the noise in stunning vibrancy.

A comfort fit mixed with Microsoft’s connectivity pedigree and the addition of a multi-functional touch/gesture/voice control system makes the Surface Earbuds a standout amongst a plethora of wireless in-ear headphone options.

With eight-hour battery life and up to 24 hours with charges from the carrying case, the Surface Earbuds will expand Microsoft’s audio game to the mobile market in ways none of their products have ever done.

Set to release on May 11, the price for the new Surface Earbuds is listed at $199.

Improving on one of the most useful laptop-to-desktop adaptors on the market is a hard task. However, with a future so clearly geared towards USB-C connectivity, the Surface Dock 2 bridges the gap from the past into the present and beyond.

Expand your workspace with up to two additional monitors, ports for drives and peripherals, and laptop/tablet charging, all the while maintaining a sleek and decluttered desk.

In addition to the updated Dock, Microsoft also revealed a new Travel Hub dock that is small and allows you to expand your connections while on the go.

Microsoft isn’t backing down from their expansive lineup of Surface devices. While the world patiently awaits the future, tech developments such as Microsoft’s will go far in maintaining their footing in the space.

Release dates vary per product, so be sure to check out the Surface store for individual dates and more information.