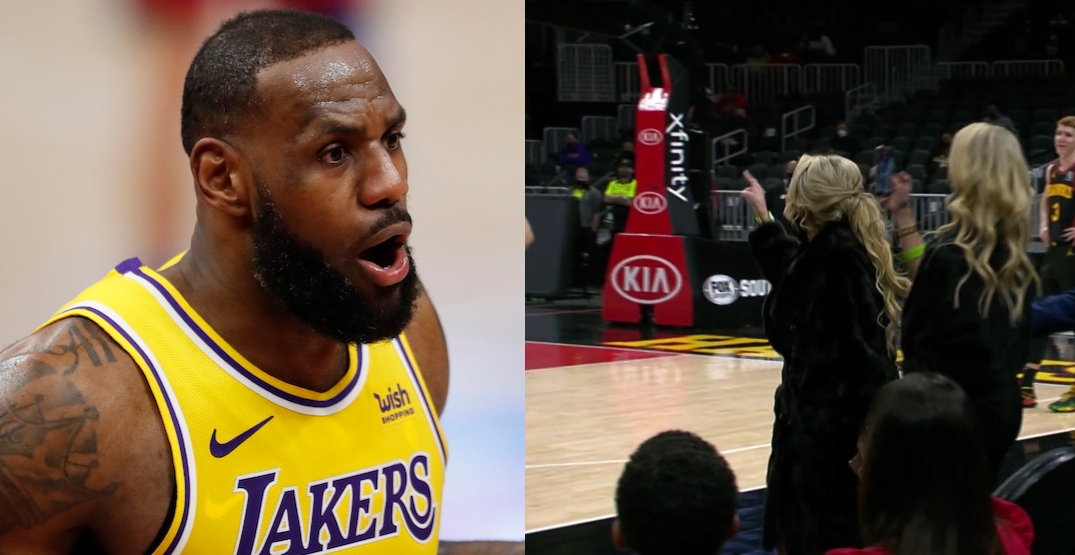 During the fourth quarter of the Los Angeles Lakers’ win over the Atlanta Hawks on Monday, it began to get heated between LeBron James and some fans, who were sitting courtside at State Farm Arena in Atlanta.

LeBron getting into it with the courtside fans in Atlanta 😂 pic.twitter.com/rOD7oZNozm

A husband and wife, later identified as Chris and Juliana Carlos by ESPN, along with two other fans, were ejected from the building. Juliana was caught by the TV cameras yelling and pointing at LeBron with her mask down.

LeBron later took to Twitter and dubbed the fan yelling at him “Courtside Karen.”

When she was leaving the arena, Juliana took to Instagram to share her side of the story in an expletive-filled video.

Woman says she got kicked out of game for telling LeBron James she was going to “fuck him up” after LeBron stared down her husband pic.twitter.com/rcna7q25Dc

After the game, LeBron said that he was happy to see fans back in the stands and enjoys his interaction with them.

LeBron on his interaction with spectators in Atlanta on Monday: pic.twitter.com/spWDITZqkl

“At the end of the day, I’m happy fans are back in the building. I miss that interaction,” LeBron told reporters. “There was a back-and-forth between two grown men … He said his piece, I said my piece. Then someone else jumped into it and said their piece.”

“I didn’t think they should have been kicked out. But they might have had a couple of drinks, maybe and they could have probably kept it going. It wouldn’t have been about the game anymore… The referees did what they had to do.”

“It certainly exposed something with regard to having fans in the pandemic,” Lakers coach Frank Vogel said. “You obviously can’t have fans taking their masks down and shouting at our players with the virus out there during these times.”

“With COVID going on, we obviously can’t have that,” Davis said. “We want to make sure we all can be safe.”