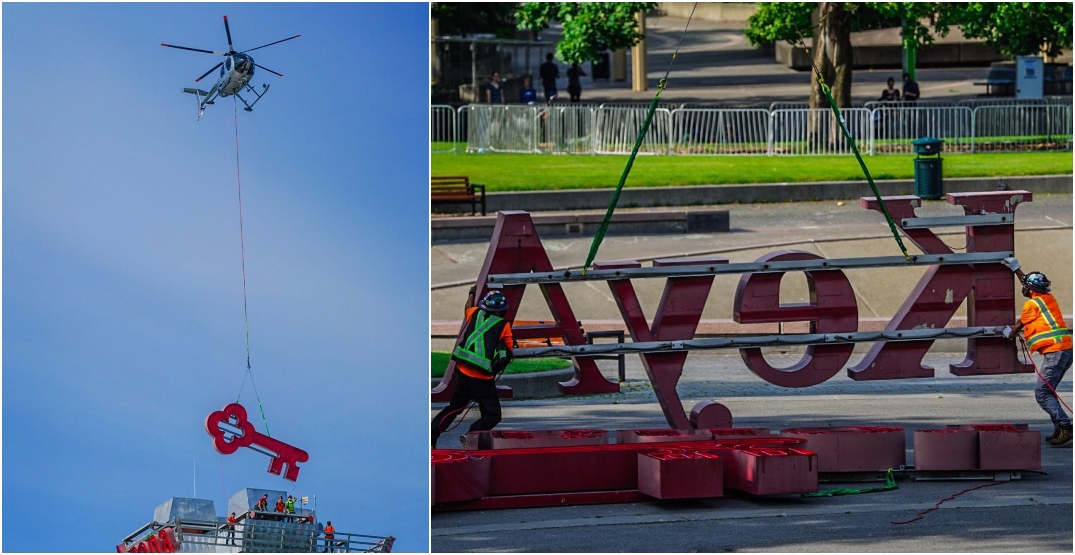 With Amazon purchasing and renaming Seattle’s NHL stadium to Climate Pledge Arena, it was only a matter of time before the 1995 KeyArena sign was removed from the crown of the building.

On July 8, a piece of Seattle history was lifted away, literally, as a helicopter took down the iconic signage atop the roof of the stadium. A new “crown ID” signage for Climate Pledge Arena will be installed in the coming months.

“[Removing the KeyArena sign] is the next step forward as we continue to move our project towards completion,” said Rosie Selle, vice president of marketing for Climate Pledge Arena, to NHL. “I know we, along with our partners at Amazon, could not be more excited to make way for our new name, Climate Pledge Arena, to rest at the top of this historic roof. The sign serves as a symbol to our commitment to The Climate Pledge and our goal to inspire global climate action.”

According to NHL, the letters signage weigh roughly 600 to 900 pounds and stand at five feet tall. The letters were staged on the fountain lawn before being forklifted onto trucks headed to a storage yard in Kent and will be moved to an undecided final destination at a later date.

Here’s a look at the KeyArena sign being airlifted away:

We hit another milestone moment in our construction of @ClimateArena yesterday as a helicopter flew in to removes the old “Crown ID” from on top of the roof.

Checking out an old sign from a new perspective 👀 pic.twitter.com/eAidbk2G4z

Can’t wait to see the new looks on top of the roof, @amazon 😍 pic.twitter.com/rFPWbfouOx