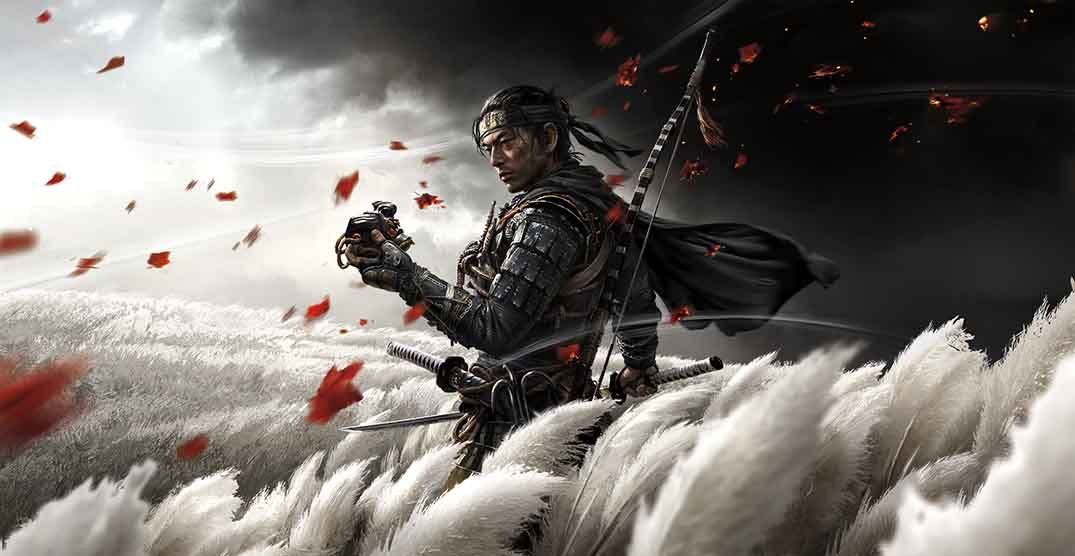 The world of video games has long been adapting and evolving the idea of open-world entertainment. An exploration of a detailed fictional or reality-inspired environment, with minimal restriction to a path, has developed into a genre gaming of its own.

One of the developers responsible for high-functioning additions to the modernized open-world game genre is Sucker Punch Productions out of Seattle, Washington. This team stirred major excitement when they announced that they would be working on Ghost of Tsushima in which players can explore a version of feudal Japan on the back of their open-world pedigree.

You play as Jin Sakai, a Samurai attempting to retake the islands of Tsushima from an invading Mongol army. Along the way, Jin will face inevitable change and challenge to his Samurai code of honor as he faces increasingly difficult battles. During this story, the Ghost is born.

Out of necessity, Jin establishes tricks and skills in covert operations and murder that poisons his Samurai upbringing and puts immense strain on his relationships.

There had been a lot of promise and a slew of hope placed on Ghost of Tsushima prior to the game’s Summer 2020 release. For the most part, Sucker Punch pulled through. However, Ghost shines in areas that weren’t among the most-hyped up aspects of the game.

First and foremost, Ghost of Tsushima contains an absolutely astounding environment to adventure within. This slightly unrealistic and stylized version of an island off the coast of Japan provides some of the most stunning and jaw-dropping visuals seen to date.

On many occasions, fast-traveling to a location meant being met with drool-worthy vistas, colors, and movement. It is easily the most beautiful game (art-wise) ever released on the console. 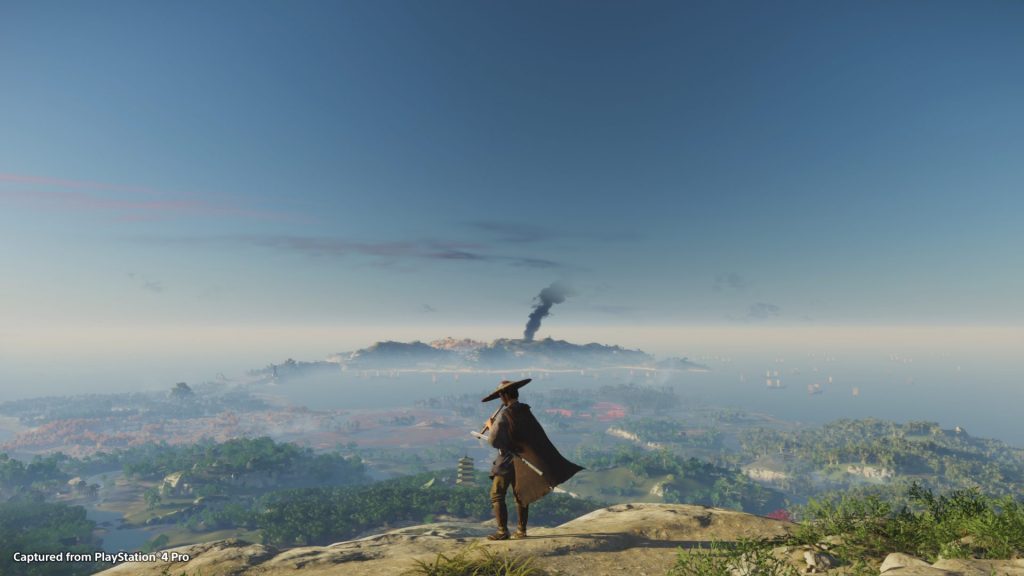 A minimal heads-up-display (or HUD) gives the player a vast window into this eye-catching environment, and with that design came the necessity for reinvention. Removing things like navigation from the player’s screen forced Sucker Punch to install what is undoubtedly the greatest exploration tool in video games today: the living world of Tsushima.

Instead of having a compass or mini-map, Ghost allows players to travel to navigation pins with assistance from the world itself. Anything marked on your map (in the menu) can be found by following the direction of the wind. You can swipe up on the controller’s touchpad to conjure a gust that will show you the right way to go.

Additionally, instead of notifications popping up when you’re near interesting world locations or waypoints on the HUD, singing yellow birds will appear and guide you to these locations. Songbirds may take you to shrines, hot springs, quest givers, and so much more. In addition to the songbirds, foxes will arrive at dens and take you to a nearby shrine if followed.

Other in-game navigation tools include smoke-stacks coming from camps, black smoke billowing from locations in need of liberation, and birds circling notable collectibles. 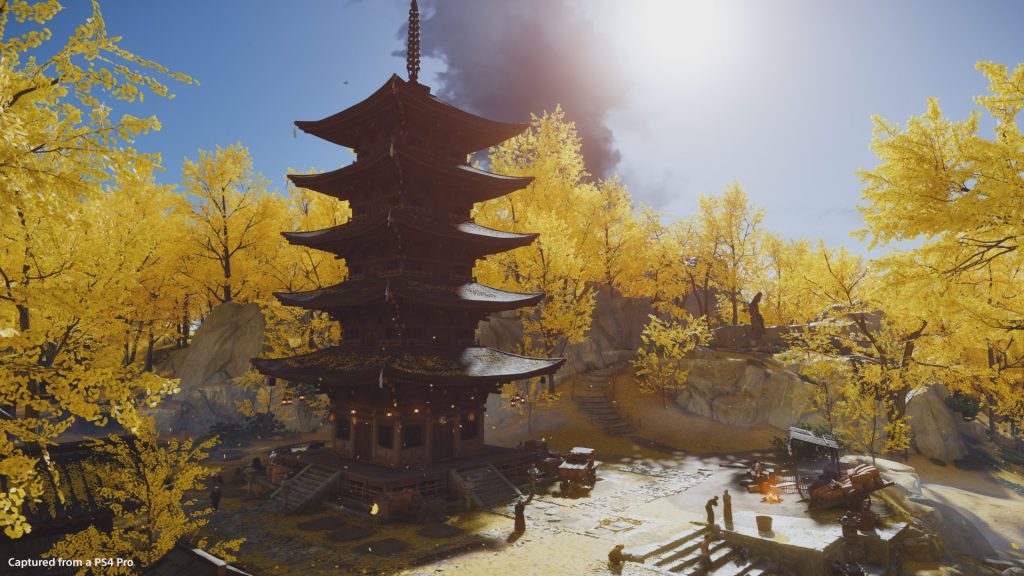 It is being within this world, the HUD design, and stunningly inventive navigation that makes Ghost such a magical experience. This made the review journey slightly frustrating because all of the unforgettable moments were merely background bullet-points during the lead-up to the game’s release.

By a very large margin, Ghost of Tsushima brings the most innovation and evolution to the information displayed and navigation tools provided to gamers. However, nearly every aspect of the actual gameplay provided little in terms of revolution.

While Ghost of Tsushima brings the best user interface possibly ever made, it lacks in-depth role-playing elements found in many modern open-world games. These shallow bowls of goodies are unfortunately the portion of the game that many advertisements and demos paid focus to. 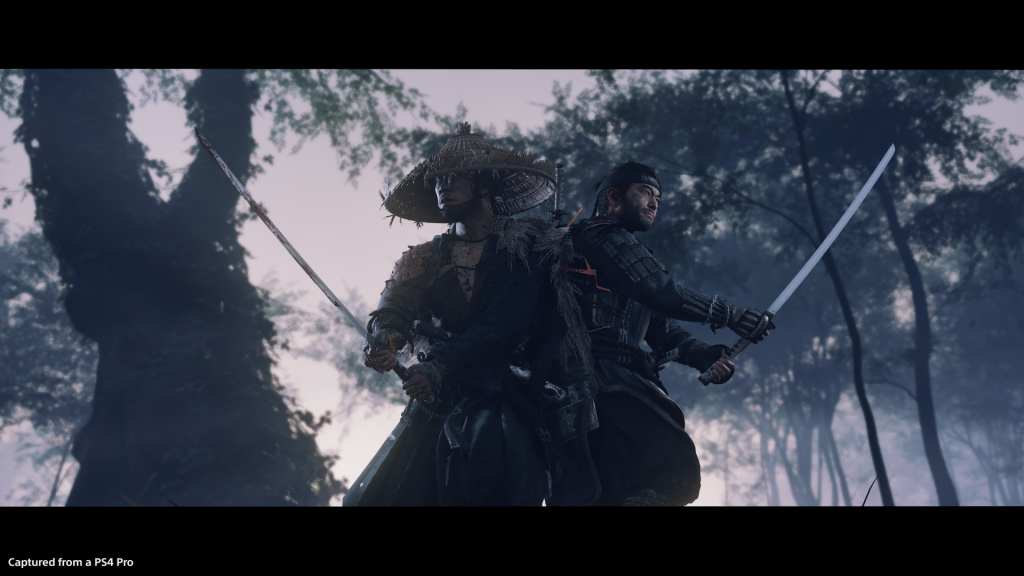 The story is good and holds a small amount of tension, but it falls well short of memorable and provides zero opportunity for choice. Alongside the linear story (which is relatively uncommon in the open-world genre), the promise of choice between playing Jin as a Samurai or as “the Ghost” was disappointingly absent.

Players can (and should) choose between approaching situations as either a Samurai or the Ghost. However, there is no change in the game depending on your choice, and there is no way to choose one or the other in the growth of Jin over the course of the game. It would have been potent if upgrades to skills or equipment force you to choose between stealth or honor, but there is no branching skill-tree. Everything in the skill menu is relevant, and this makes it all feel not special. 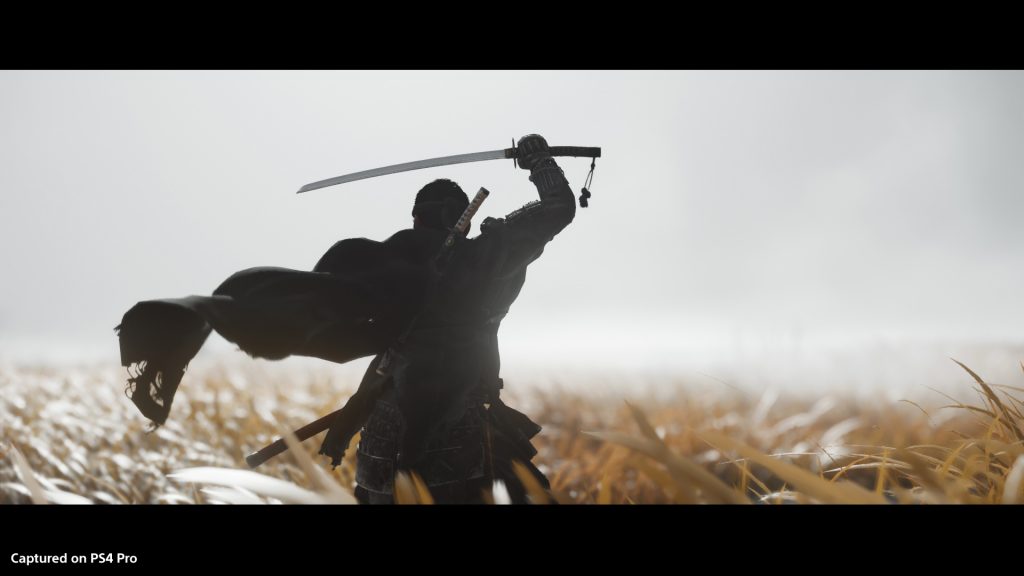 For the amount of time that Sucker Punch spent focusing on the difference between Samurai and Ghost, players do not receive the option to pick or lean towards one or the other. Even the addition of a simple honor meter would have made your decision to play one way or the other more important.

Luckily, fighting as either version of Jin feels great, and the mechanics of all your tools truly induce the feeling of being a tale-worthy warrior. Additions of multiple stances for swordplay and semi-accurate historical ninja-light weaponry make for a constantly enjoyable combat system. 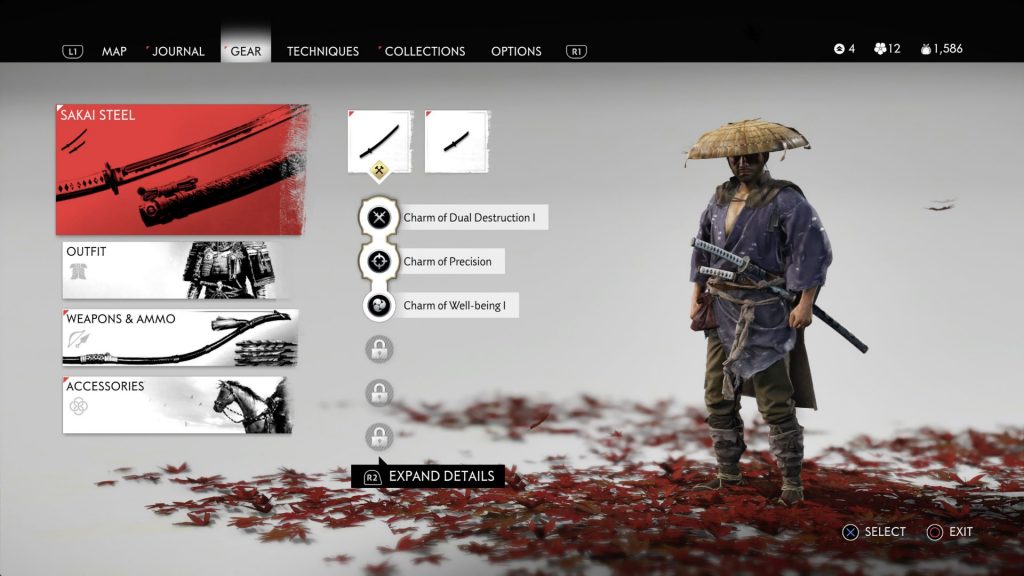 The team behind Ghost also leaned into their customization options and gear available to wear and use during the lead-up to launch. However, both of these aspects of your character are just as shallow as the RPG elements included in the game. A dozen or so armor options, a slew of visual-only customization for your swords, make for some interesting choices in appearance but not much else.

Regardless of choice (or lack thereof), Ghost of Tsushima is an adventure worth your time. The world is full of mystical movement and ethereal wonders. From outlooks that grant you (Jin) the opportunity to craft Haiku poems, collectible swords appearances, and tales that unlock legendary armor or abilities through unique short stories, the world is abundant. 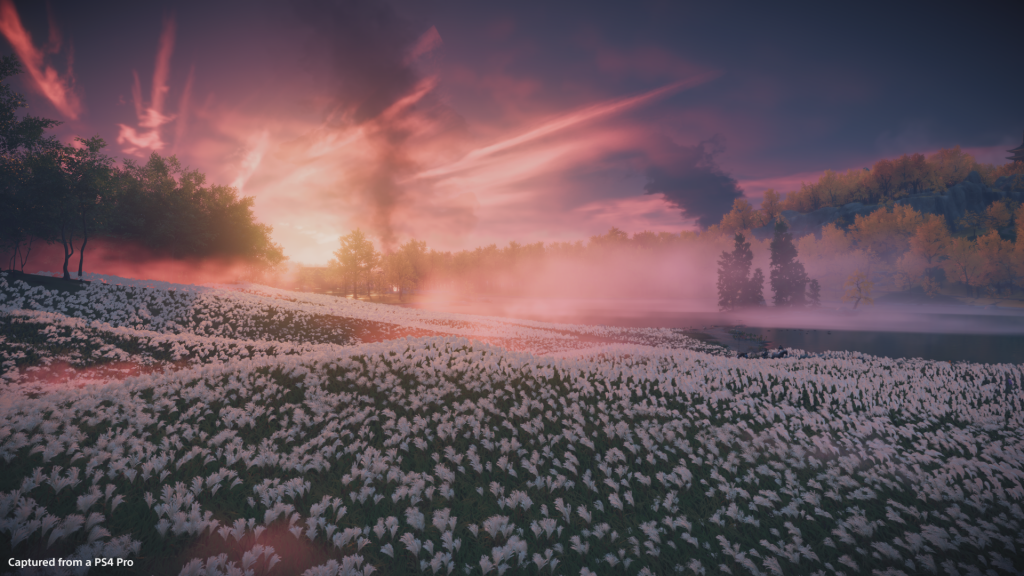 Small gameplay and interface options like a unique take on an in-game photo mode, a grainy black-and-white color mode inspired by legendary Samurai filmmaker Akira Kurosawa, and touchpad inputs that allow the player to fancifully sheath or unsheath their sword, all add touches of wonder to the experience.

I was also excited to play through the game with a Japanese voiceover featuring exceptional acting talent. However, the Samurai cinema lover within me was greatly disappointed to discover that all of the lip-sync animation and cut scenes remained synced to the English script, making the cinematic portions of my play-through nearly unbearable to watch. This, early on, forced me to return to the English voice track.

In the opposite fashion of the recently applauded PlayStation exclusive The Last of Us Part II, Ghost of Tsushima serves up some of the greatest visuals and exploration in gaming history. However, the meat and potatoes of the experience are missing that je ne sais quoi, that little bit of seasoning that makes it truly extraordinary. 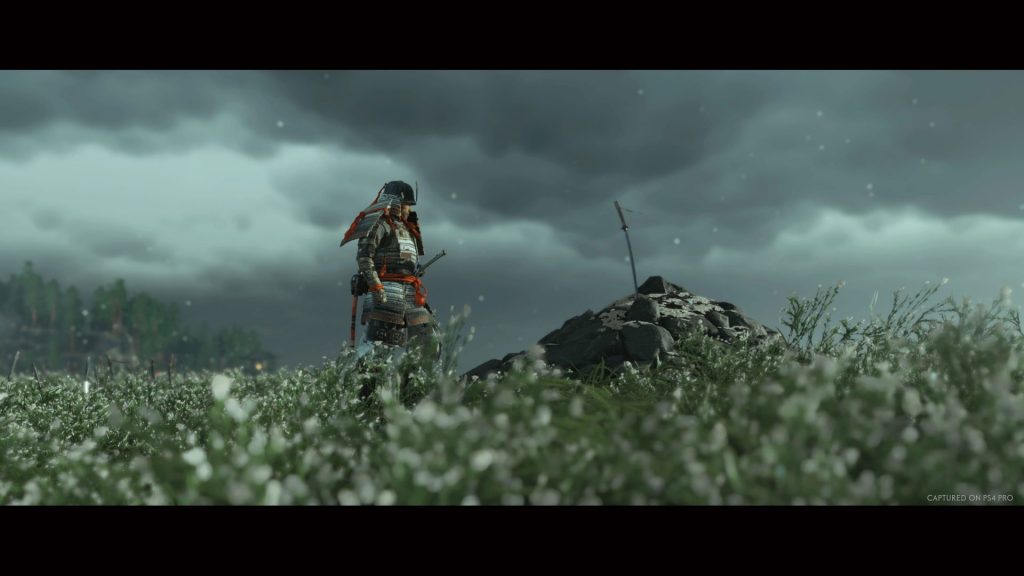 Keeping it from the annals of history, Ghost of Tsushima will be a remarkable example of revolution when it comes to presentation, and it will hopefully force future projects to reconsider how they provide information to their players.

Part of me can’t help but wonder how perfect this game could have been had the team at Sucker Punch dug a little deeper for their gameplay well.

Luckily, I will never forget how this game looks, how it sounds, and how it feels. The world is perfect, but the game you get to play within it needed more.

A download code for Ghost of Tsushima was provided by PlayStation for this review.