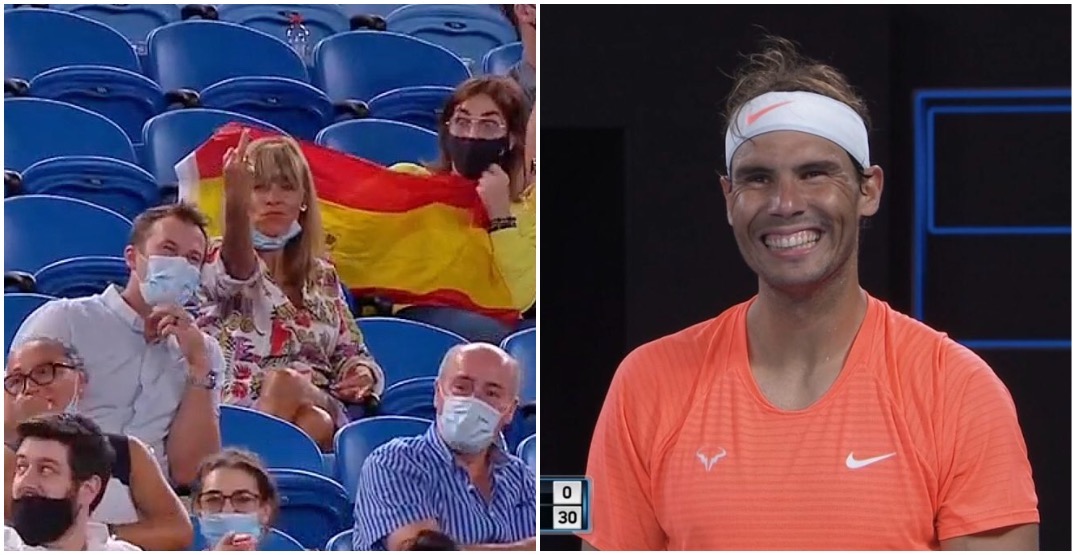 Not many things catch tennis superstar Rafael Nadal by surprise, but this certainly did.

Late in his second-round match at the Australian Open on February 11, with Nadal serving, he was interrupted by someone in the stands. A woman yelled at him, “Hurry up, you OCD f***!”

The chair umpire asked her to be quiet, and when Nadal looked towards the crowd, the fan stuck up her middle finger in his direction.

“We’ve missed fans, but maybe not that type of fan,” said the broadcaster calling the match on Channel 9 in Australia.

A fan has been BOOTED from the match for unsavoury language and flipping the bird to Rafael Nadal! 💥😂

The 34-year-old looked surprised, but he kept a smile on his face the whole time. The woman interrupted play again and was removed by security to a chorus of cheers.

Nadal laughing it off as the lady gets ejected. pic.twitter.com/qlRzRm14Vq

“Honestly, somebody doing the finger to me, I don’t know the reason, but I was surprised,” Nadal told reporters after the match. “But I said to myself: poor girl, she must be drunk.”

The Australian Open is allowing fans back because Melbourne, the host city, has virtually extinguished COVID-19 with a strict lockdown.

According to the World Health Organization, the daily case count in Australia as of February 11 was 11, with a seven-day average of six cases.

To enter, spectators must clear security checkpoints and complete a health declaration on the tournament’s app. Fans are also asked to bring masks, but they only have to wear them if stadium roofs are closed because of poor weather.

The tournament’s organizers have also divided the stadium complex into three zones to facilitate contact tracing in the event of a positive COVID-19 case.

As for Nadal, he will face Cameron Norrie in the third round on Saturday.