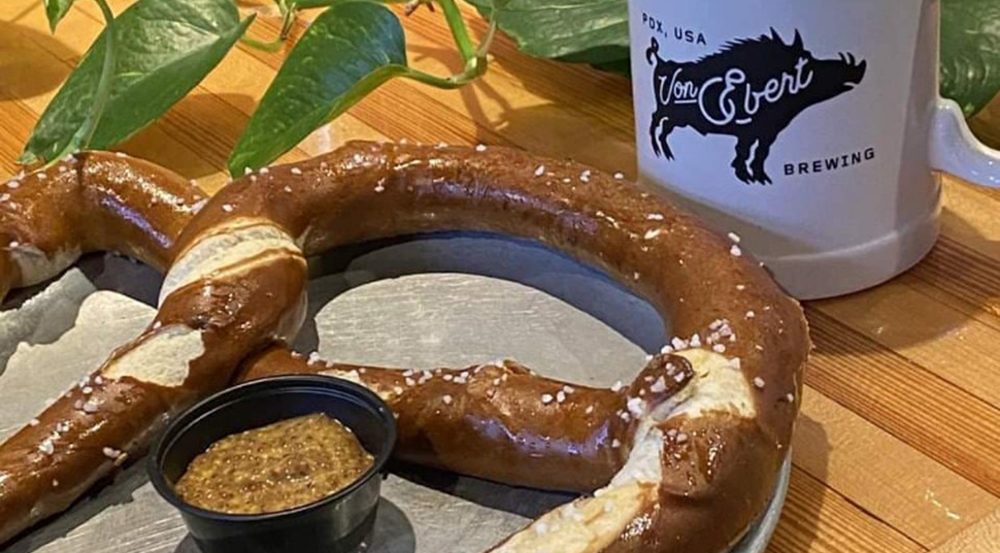 An extra special place in Portland called Von Ebert Brewing has a ton of amazing eats, but they are taking one nostalgic treat to the next level.

There are only a handful of food items that crop up in your mind when you think back to the before times about all of the delicious delicacies we have enjoyed at places like the fair or festivals.

Von Ebert Brewing is, of course, a brewing house, which means that you are in for a great time when pairing local and house-made beverages with their succulent and tasty menu items.

One thing we are big fans of — as is most of the Portland metro area, actually — is the Fried Chicken Sando (pictured above) at Von Ebert. This juicy and monstrous sandwich has become so well known in Oregon that any local will point you to one of Von Ebert’s two locations without hesitation.

However, it is the house-made Giant Pretzel that we love to celebrate and highly suggest that you go and try out. There is a massive amount of nostalgia and good feelings that stir inside your belly when you chomp into this fluffy, yet crunchy, warm pretzel.

Best of all is the sauce. While a “standard” shop might give you house-made mustard for dipping, Von Ebert goes above and beyond to offer up one of the best mustard dips we have ever had. According to their menu, this magical sauce is Queso mixed with whole grain mustard. You should really check it out.