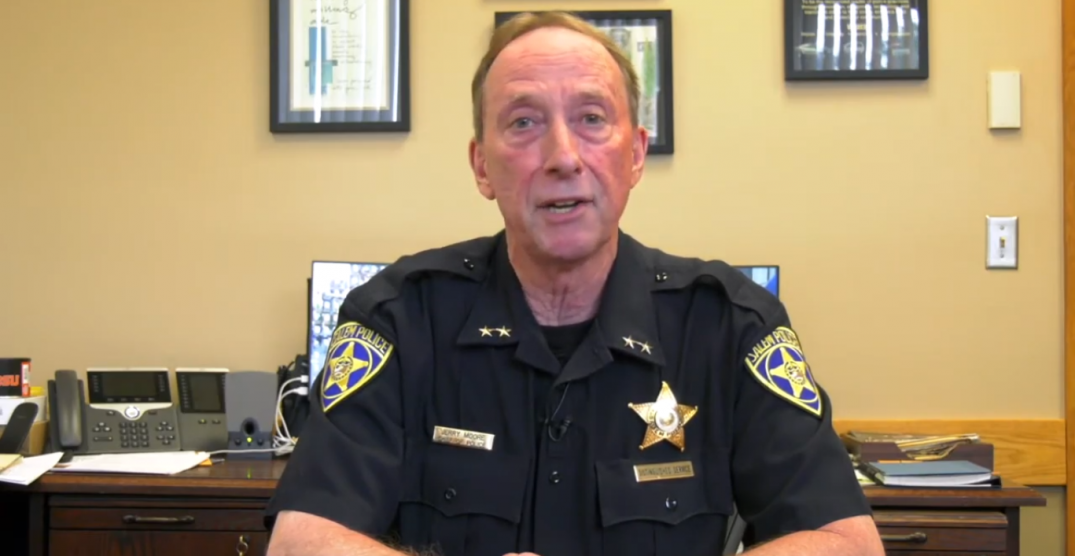 Salem Police Chief Jerry Moore addressed the public on Friday following growing outrage over a video that has surfaced online.

In the original video, posted on Facebook, a police officer is seen asking alleged Proud Boys (an SPLC-designated hate group) to “discreetly remain inside” during pending curfew and arrests. He is heard in the video saying that police don’t want to “look like” they’re “playing favorites.”

“The message we have received is a concern that we are treating people differently,” said Moore in his address. “For that, I am sorry. Sorry that there is even a thought that this department would treat some different than others.

“I know the officer involved. Like me, he has dedicated his life to this department and this community,” said Moore, before stating that the officer in question was “unfortunately not fully briefed” about the enforcement of the curfew.

“Moving forward, all officers tasked with enforcement of the curfew will be properly educated before deployment.”

Before wrapping up his statement, Chief Moore said that there are certain situations in which the Salem police do treat people differently. “Lawfully armed individuals violating a curfew does differ in severity from people throwing bricks and bottles during an otherwise peaceful demonstration.”

The viral video surfaced mid-week, amongst the footage of people standing up for justice from all over the world.

The video in question shows that this event took place outside of the Glamour Salon in downtown Salem, which has been fighting against the state’s coronavirus pandemic response. From a now-deleted Facebook page, salon owner Lindsey Graham allegedly posted a “Call to Arms” against protesters planning to march in Salem on June 1. All social media accounts for the salon have since been removed from their platforms, or made private.