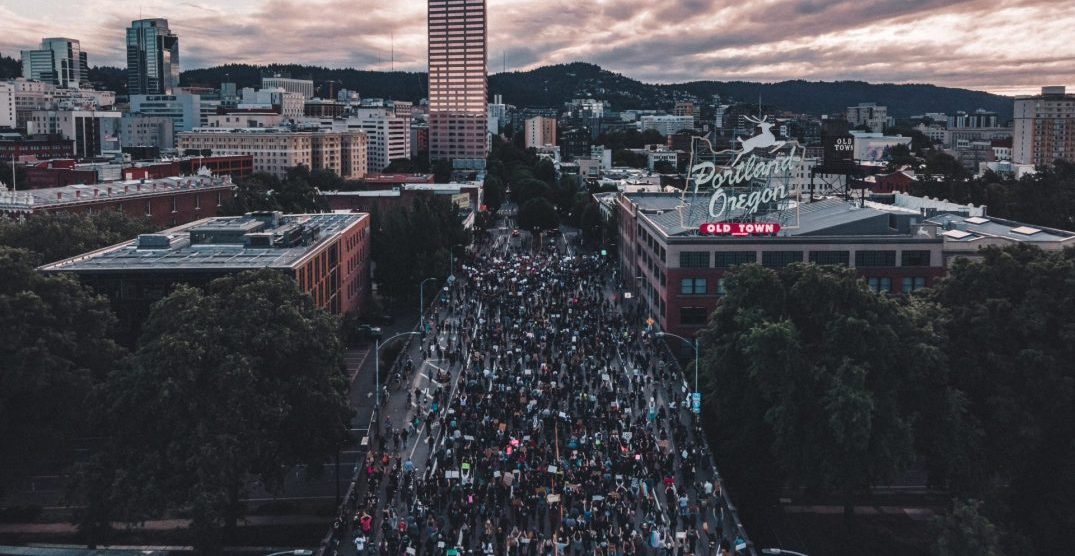 Photographs of a Portland protest capturing the severity and volume of the demonstration are for sale, with proceeds going to charity.

We’ve spoken about it a few times since the movement began; Portland has a history of standing up and speaking out against what pains its people. And since the killing of George Floyd on May 25, Portlandians have stood with people around the world to fight for equity.

Last weekend, thousands of Portlandians marched through the city, taking a moment to pause while filling the entirety of the Burnside Bridge, to lay on their stomachs for nine minutes.

One photographer, Andrew Wallner, managed to capture the powerful moment from the air and on the ground.

“I am deeply humbled,” Wallner told Daily Hive. “I’ve been told by people of all colors that this imagery has immediately moved them to tears, inspired them to take action, and ignited difficult conversations about race and privilege across the country.”

At the time of writing, almost 60,000 people had liked Wallner’s Instagram post, which highlights his decision to sell prints of this historic moment and his plan to donate all proceeds to the DontShootPDX charity organization.

“As a creative, concerned for the wellbeing of his BIPOC friends locally, in his state, and across our nation; and a person wanting to play a part in helping organically,” Wallner adds, “I was trying to figure out how to be an ally.”

Originally offering half-a-dozen black-and-white photographs capturing the emotional moment, Wallner now has 15 images in his collection, available for purchase in a variety of mediums on his Fine Art America store.

“To showcase the vivid, inspiring, and powerful nature of the peaceful protests in a way that many major news organizations are currently failing us,” says Wallner. “I hoped others around the country could be inspired to take positive action after seeing the efficacy of these tremendous demonstrations, and to personally remember these moments for generations to come.”

“Now more than ever, there’s a lot rolling around in my brain, determining where I stand as a creative, as an activist, as an ally, and as a privileged white man. This is not my narrative to own. I pledge to continue to learn and to listen. Black Lives Matter. ”

While we continue to gather more ways to support black communities in our cities, obtaining a piece of history to cement the moment and maintain a consistent conversation as time passes, these photographs speak as much in volume as they can in financial support.

“If just one elected official sees this image and feels compelled to make a change, it may just save 1,000 lives,” hopes Wallner.

Purchase a print, continue to talk, and contribute to DontShootPDX.