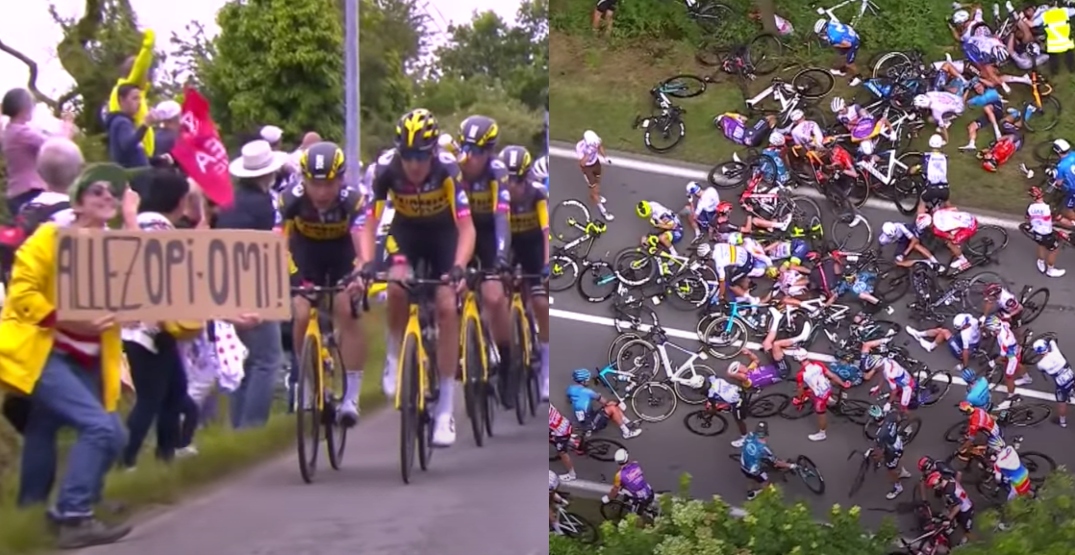 As in the video, the spectator pulls out in front of the riders with a sign reading “Allez Opi-Omi,” shouting out her grandparents. Fans jumping in front of the peloton for a quick photo op is nothing new, but it’s always a bad idea.

Before the fan can pull away, German rider Tony Martin strikes the fan, and well, chaos ensues.

The Tour de France is the most famous race in the cycling sport. The three-week journey across the French landscape tests world-class athletes in a gruelling endurance competition.

It’s uniquely for being one of the most well-known sporting events in the world that you can usually go to for free. Fans can show up to the side of the road on a given day and have the chance to be right in the face of world-class riders racing through small towns, mountains, and big cities. There really is no other sporting event quite like it.

Unfortunately for the athletes, it’s often onlookers getting too close that brings worldwide attention to it.

This year’s Tour de France began on June 26, with the crash occurring midway through the opening stage. This year’s Tour is comprised of 21 stages concluding on July 17 with the traditional ride through Paris’ Avenue des Champs-Élysées serving as the final destination for the riders.

The Tour de France was postponed last year due to the COVID-19 pandemic. Traditionally beginning in June or July, it eventually began on August 29, running through late September. Fans were encouraged to stay home for last year’s event but returned this year.